Start playing NHL Eastside Hockey Manager 2007 now, and you might not come up for air until after the real hockey season ends next spring.

With a simulation as good as NHL Eastside Hockey Manager 2007, you might not need the real NHL anymore. Sports Interactive's incredibly detailed and lifelike look at pro hockey is back with a bulked-up feature set, an overhauled menu system, and all sorts of artificial intelligence enhancements that make for amazingly authentic computer management decisions. While this series has been fantastic from the very beginning, this edition of the game is clearly the best ever.

On the surface, the new EHM looks and feels a lot like the old EHM. The only big changes you notice right off the bat involve the interface, which has been tweaked in a few areas to provide for more intuitive navigation among the more than 45,000 players and 3,000-plus teams included in the game (meaning that sim times are a little slow, especially if you run a league tracking most of these teams and players). Basic features are still roughly the same as before. You take over the operation of the hockey club of your choice in solo or online leagues (although the designers have obviously focused mostly on improving solo play this year, and the game's few hardcore multiplayer fans will be disappointed that SI strangely cut the number of supported players down to 16 players this year, so human players can't take over every club in the 30-team NHL), from Junior A all the way up to pro circuits like the NHL and the European Elite, and handle management and coaching tasks like signing free agents, setting lines, and developing on-ice tactics.

But you really begin to notice improvements to the game from the moment you get started with a career in the NHL. Increased player movement is the most obvious change. Where past EHM games were a little light on player movement, as the computer GMs were a bit gun-shy about putting also-rans on waivers or approaching you for trades, now the action is fast and furious, particularly at certain times of the season. For instance, at the tail end of training camp every year, there is a flurry of action as teams dump their disappointments to the waiver wire. The action also heats up with increased trade talk around the NHL trade deadline and as the summer entry draft approaches. It's easier to make deals from your perspective, too, because you get loads of feedback on potential trades from your coach and the opposing GM. Your coach is quick to tell you if a player is being overvalued or if he has any concerns about the financial ramifications of a proposed deal.

General managers are very astute and fully aware of the skills of players being offered up for trade, their team needs, and the salary cap. This means that you can't rip them off, but you can swing reasonable trades for both sides. It's a bit spooky how much player movement mimics real life. Clubs out of the playoff hunt will hold fire sales of players, while those gunning for the Stanley Cup will load up on players either at the trade deadline or around draft day. Also, the new NHL collective bargaining agreement is a big issue in the game. Teams can get stuck near the salary cap limit or simply find that a high-priced player is taking up too much cap room for what he's contributing on the ice, which forces teams to put players on the trading block for either picks or cheap prospects. Players like Jeremy Roenick and Sergei Federov have been moved in the real NHL in deals like this over the past year, so it was great to see this same sort of transaction happening in EHM 2007. In our first NHL season, for example, we managed to pick up Jamie Langenbrunner from the capped-out New Jersey Devils for the low, low price of Nik Antropov.

Bargains are rarities, though. Computer GMs are tough traders and always want salary parity in deals unless you're giving them a great player that they just can't pass up. Players are also good negotiators and demonstrate real personality and character. We approached Theoren Fleury with a contract after a great tryout in the Maple Leafs training camp, and the possible future Hall of Famer actually turned us down because we set his role as a fringe player. As you can easily imagine the real Fleury pulling the same sort of stunt, seeing this in the game was pretty satisfying (even though it was a bit goofy that we eventually signed him for a lot less money by promising him a key role with the club for the coming season).

On-ice details and tactical options have been greatly improved, as well. Players are now rated at different positions, so you can tell at a glance whether it's a smart move to try that natural center on left wing, where he is rated as "unconvincing," or shift a natural left defenseman to the right side, where he's rated as "competent." Scouting reports are more detailed, as well. Loads of information is available on all players, so you can get a thorough look at prospects before going into the draft. You can now micromanage every player's role on every line, too, by manipulating a suite of slider bars that control their aggression, tempo, hitting, back-checking, shot or pass preference, and more. It's easy to get absolutely lost in the minutiae of running your team in both the front office and on the bench, constantly tinkering with little details to try and get the best out of your club.

But even though EHM has stepped up its game when it comes to the nuts and bolts of the simulation engine, the audio is still nonexistent, with the exception of rock music between whistles while watching games, and the series hasn't changed much in terms of appearance since its inception in 2004. This year sees the graphics take a step back in one area, as SI has cut most player photos out of the game as a cost-saving measure. All NHL stars are represented by generic forward, defenseman, and goalie icons in their profiles, although a lot of the league's lesser lights still have their actual photos in the game. This removes some of the hockey-card character of the player screens, so hopefully some enterprising modder will whip up a face pack to add the pics back into the game.

The 2D engine that's used to watch games is better than ever. Previously, it looked a bit like pinball on ice, with the little numbered dots representing players scurrying around in ways that didn't make much sense. Now, games play out exactly like real hockey games. Sims are slower overall, but you can watch plays take shape, players head off on changes, and teams set up on the power play. You can tell if your line and tactical strategies are working by watching the games now, which makes you feel like you really are a general manager checking out your team's performance.

Any hockey nut will have an absolute blast with NHL Eastside Hockey Manager 2007. The only problem is that the game is so authentic and so all-consuming that you just might find yourself playing it practically nonstop for days and weeks at a time. Start playing it now, and you might as well say good-bye to following the real NHL season, as your free time will be booked right through next spring. 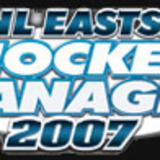