NES Remix was a good idea when it launched without fanfare in late 2013 and reintroduced you to some of the greatest gaming moments from the 8-bit era, but NES Remix 2 is even better because it boasts a superior roster. Borrowing from a fresh assortment of classic games, this second retro bundle is a treat even though it doubles as a virtual salesperson.

In NES Remix 2, you find a total of more than 150 bite-sized challenges carved from 10 different NES games. Typically, you are offered a series of three or four objectives, and you can make three attempts. Sometimes, there are extra steps, in which case you're provided additional lives. Elsewhere, you face only a single objective, but it's more difficult and time-consuming. At the end of a given challenge, your performance is awarded anywhere from one to three stars (with a special rainbow flourish also appearing for the truly adept), depending on how long you took and how often you failed. You also receive in-game currency called bits that unlock stamps you can use on your Miiverse posts. The game saves a video record of your run, for easy embedding and sharing, which adds a competitive side that these games once mostly lacked.

Many of these challenges present you with a chunk of yesteryear, but freshened up. For instance, Mario will run at full speed through a renowned Super Mario Bros. 3 stage, and you must choose when to jump and with how much vigor. Elsewhere, Link navigates a perilous series of ledges patrolled by mobile octopus enemies, all with a life meter that is nearly exhausted. These stages may be familiar to you, but they pose a new challenge if you're not used to hurrying through them. The most interesting diversions, however, are those that combine elements from multiple series, because you're especially likely to be caught by surprise by a setup you've never encountered before. Link might need to hack his way through bricks to collect coins in the Mushroom Kingdom, or Pit from Kid Icarus might have to try to collect fairies while avoiding flying ghosts in an environment that was ripped from Link's Adventure.

Fragments of 10 key NES games are included in NES Remix 2. The star of the pack, Super Mario Bros. 3, is available to sample immediately. Once you complete challenges and start earning stars, you gain access to Dr. Mario, Super Mario Bros. 2, Kirby's Adventure, and more. Had NES Remix 2 included complete editions of the selections it sort of compiles, the result would have been difficult to ignore. However, the only game you can completely explore here is a reworked version of Super Mario Bros. known as Super Luigi Bros. That addition lets two players take turns running through the classic platformer game, but with the experience modified so that the screen now scrolls from right to left, and the protagonist is Luigi. The less famous sibling slides and skids like a kid in socks on linoleum, but he jumps higher and further as compensation. When combined with the unconventional orientation, the altered physics make a stranger out of familiar terrain. Muscle memory and time-worn technique are no longer your allies. They're more likely to land you in a pit or send you flying headfirst into a patrolling goomba or koopa's personal space.

Although there's more than enough content to keep you busy with NES Remix 2 for a good while, the package sometimes feels like the world's greatest glorified demo and not a distinct new experience. There's even a handy link to the eShop, which conveniently sells full versions of each excerpted game. A fair number of the objectives provide an overview of those selections and their most iconic hooks and gameplay mechanics, which is enough to whet your appetite. Other inclusions, however, are inexplicable. One challenge involves watching the Wario's Woods opening tutorial, for instance, and another screens a training montage from Punch-Out. The ending sequences for the various games are also shown, so it's a good idea to finish them ahead of time if you were saving such things for a surprise.

NES Remix 2 is a highlights reel that you pay for, but that's not as bad as it sounds provided you are interested in challenging yourself while you reminisce and sample. Old conventions have been modified to offer enough variety and genuinely interesting challenges that they manage to prove fresh all over again. Nothing here works as a replacement for the original material, but this is still a delightful experience whether you remember blowing the dust out of 8-bit cartridges or not. 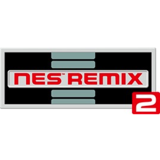 Jason Venter has spent dozens of hours with most of the games that were reworked for NES Remix 2, and he happily spent most of another dozen hours chasing after three-star ratings and stamps for the sake of his review. He has clearly caught the Nintendo bug.