Blocky visuals don't hinder this fun racer, which lets you customize a dozen of your own fresh rides.

The previous Need for Speed Underground game on the GBA received quite a bit of flack for its pixelated, choppy visuals. However, under the hood it was a delight to play, and it really did a nice job of letting players tweak, paint, and modify their own stables of hot rods. While those same blocky circuit graphics are back for an encore in Need for Speed Underground 2, the development team seems to have ironed out some of the sicklier aspects of the graphics engine. At the same time, the team has made a handful of improvements to the game's course designs and modding interface. In fact, improvements have been made to such an extent that this latest release stacks up well against the pedigree established by the console versions of the franchise.

3D isn't the GBA's strong suit, so it's actually pretty impressive that all the cars and courses in NFSU2 are put together using flat-shaded and texture-mapped polygons. Due to the low screen resolution and the relatively minimal polygon count, the graphics, on the whole, do appear somewhat pixelated, although not to the point that they get in the way of gameplay. The frame rate is smoother in the sequel than it was in the original, the textures are a little cleaner, and the addition of jump ramps and shortcuts to the courses helps make a person feel like he or she's in a city environment. Commuter vehicles also look more realistic this time around, and they often turn onto the main course route instead of just slowly trudging through cross streets. The game's car models are particularly impressive. Changes you make to the body, accessories, and paint job in the garage are reflected out on the street, and the high number of polygons, combined with the sharpness of the car graphics, really serves to put the game's vehicles on center stage. New visual enhancements, such as metallic paint jobs and neon kits, further increase the sexiness quotient. Another nice touch is that you can rotate, turn, and zoom the camera viewpoint in the garage to allow for the ogling of your custom rides.

The short music loops that provided the soundtrack for the previous offering were ditched, which is a cutback that ultimately works in the new game's favor. Instead of hearing the same censored Lil Jon loop from "Get Low" repeating itself over and over again, the soundtrack is a collection of sublime techno and hip-hop beats that prop up the visuals without overshadowing what's happening. As was true of the previous entry in the series, the in-game engine and tire sound effects are superb, and they stand out all on their own.

More importantly, the game itself is fun and energizing. The "Go Underground" mode includes a number of different circuit, time trial, knockout, drag, and drift events, as well as simple minigames that unlock rare performance upgrades. Circuit, knockout, and drag events can involve as many as three other CPU opponents. The drag racing in NFSU2 is more involved than it was in the previous game, because the sequel incorporates traffic, lane changes, and jump ramps into the event. Drift events haven't changed much, but they were fine to begin with, because getting points just for fishtailing the car all over the place never gets old. Most circuit courses have shortcuts in them that drastically reduce lap times. Some, in fact, are cleverly hidden. The CPU has been programmed to take advantage of these shortcuts every so often, but not so often that you end up feeling like the computer is cheating. In general, the other cars stay competitive and are subject to the same mishaps that players are subject to. Chief among these are the vehicles that drive through cross streets and sometimes merge onto the raceway. Colliding with them can lead to messy pileups, just as you'd expect.

Obviously, this isn't a driving simulator. Crashing into other cars or bouncing into buildings will slow you down, but neither takes you out of the race entirely nor keeps you in limbo for more than a second. Engaging the hand brake lets you slide through turns, and it's OK to slam sideways into a guard rail to point the car in the right direction. If you're falling behind, you also have the option of kicking in a nitrous boost, provided you installed the parts for it. The GBA version of NFSU2 is as much about body mods as its console cousins are. Each time you win an event in the Go Underground mode, you'll earn points that you can use to buy more than 100 different performance and body upgrades, including engine mods, body kits, paint jobs, and vinyl artwork.

Assuming you're satisfied with how it looks, sounds, and plays, there's no doubt that Need for Speed Underground 2 has enough modes and options to keep you occupied for quite a while. The car selection includes 18 different models, from big-time manufacters like Mazda, Subaru, Volkswagen, and Toyota. Performance upgrades come in 10 separate categories, including engine, exhaust, tires, turbo, and nitrous, among others. There are also loads of body mods to pick from, including bumpers, side skirts, scoops, rims, and tints, along with a smorgasbord of various paint jobs, vinyl kits, and under-car neon kits. In terms of courses, the game includes 12 circuits, 15 drag tracks, and 15 drift courses. There are four minigames to pass the time with as well. Most players will invest the bulk of their time in Go Underground mode, which serves up all those courses and minigames in a variety of ways (including both normal and reverse). Furthermore, the mode offers up a collection of more than 70 individual events. The cartridge also contains a quick race mode and a link-multiplayer mode that supports two human players, in addition to two CPU drivers.

Overall, Need for Speed Underground 2 for the Game Boy Advance succeeds at distilling the best aspects of the console versions into a cartridge that you can take and play anywhere. Whether you're looking for a solid racer or just want to get lost putting together your own stable of slick rides, you can do both here. 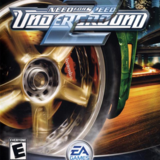