Need for Speed: Nitro gets off to a fast start, but lacks enough variety to make it into the winner's circle.

Need for Speed is one of the most successful racing game series of all time, and like with most long-running franchises, a face-lift now and again does some good. Need for Speed: Nitro is the first game in the series made exclusively for the Wii with a casual audience in mind. It's a lively arcade racer with a quirky design concept, and it dishes out plenty of exciting gameplay. Sadly, it's good only in short bursts: the lack of variety results in no more than a few hours of motivating gameplay.

Need for Speed: Nitro is not an intimidating racer, which should come as a relief if you're not a diehard racing fan. The controls are responsive and simple to master, regardless of which controller option you choose. Practically every setup imaginable is supported: the Wii Remote (one-handed steering by pointing the Wii Remote forward and twisting it left or right); the Wii Remote and Nunchuk (steer with the Nunchuk); the Wii Wheel; the Wii Classic Controller; or the GameCube controller. The game supports up to four players, in both Arcade and Career modes, so you can have four different people playing with four different controllers. Besides the standard go-and-stop moves, you can execute a nitro boost a la Burnout by shaking the Wii Remote, and you can drift by tapping the brake.

You can choose to play either in Arcade or Career modes, the latter of which takes place in five locations that you gradually unlock as the game progresses. You start off in Rio and make your way to Cairo, Madrid, Singapore, and Dubai racing city cars, performance cars, and finally supercars. Although the game features real-life car models, from Beetles to Renaults to Corvettes, they've been made a lot bigger, brighter, and faster, like cartoon cars. This in part is what makes the gameplay so fun: zooming around on wide tracks with brightly coloured cityscapes in the background, giving the cops the runaround (this wouldn't be a Need for Speed game if the police weren't constantly trying to break up the party), and occasionally crashing into a wall or two just to see what will happen (you can't total your cars). There are also items to pick up along the tracks which can get you out of trouble: a wrench pickup that will instantly repair your car with the press of a button, and a police badge pickup that will shake off the cops and offload the "heat" to one of your opponents. Arcade mode is also a lot of fun, offering up a total of 10 tracks (two in each city) and events like team race, elimination race, drag race, and circuit race. In Arcade mode everything is unlocked from the outset, and you can take your pick from more than 40 cars in all three classes.

Of course, there's also the competitive aspect of the game, which is just as fun, albeit in short bursts. The game's star-based progress system is pretty standard but well executed: it's suitably hard but not impossible. The race types are standard Need for Speed: circuit, elimination, drag races, drift challenge, time attack, and speed trap. Progressing through each location is a matter of completing all the events and acquiring the required number of stars to unlock the next city. However, within each event there are three or more stars to be won by doing different things: for example, you can race in a circuit event and aim to come in first, second, or third for three stars, two stars, or one star, respectively. You can then go back to the same event and forget about placement (since you've already got those stars) and focus on something else--you can acquire a star for drifting successfully and another star for clocking a lap under 1 minute 15 seconds. One good thing about this system is that it gives you an incentive to play the same event more than once, and to spend more time at each location. After you achieve a certain number of stars, you will be able to unlock new cars, customization options, and new locations.

Unfortunately, Career mode is a bit of a drag because of the lack of variety in race types. While the star system keeps things interesting throughout one location, doing the same thing over and over again in five locations is repetitive. Even when you unlock new cars and compete in the higher-difficulty races, the motivation to keep playing completely disappears after a few hours of racing the same events. There's no real evolution behind this aspect of the game: you don't feel like you're advancing or developing in any way because you're doing the same thing, just with different cars. Things aren't helped by the lack of camera options in the game, which could have been used to break up the monotony somewhat. It's unforgivable for a modern arcade racer to offer just one camera view. While the close third-person view is the most common, a cockpit, bonnet, bumper, or any other view would have helped immensely; staring at the track from the same angle every single time you race gets boring quickly. The level design is also a bit off--at times the track and cityscapes seem to melt into each other, resulting in unexpected corners, crashes, and lost time.

The varied customization options help to save the game from total repetitiveness. You spend a good chunk of time playing around with the designs--even though the cars are rated in terms of speed, acceleration, handling, strength, and drift, you can make only aesthetic changes to them. You can choose from dozens of colours and stickers, or customize your own. Placing them on the car is simply a matter of pointing the Wii Remote on the spot where you want them to go. Different brushes can be unlocked throughout gameplay, so those who believe strongly in their artistic abilities can also free-form paint all over their car if they so wish. But the best part of the whole process is a quirky design concept that works brilliantly for this type of game: you have the option to customize how the trackside buildings appear when you're racing. Again, you can pick from dozens of graffiti designs and stickers, which will first appear on the showroom walls so you can get a feel for what you've picked. During the race, your designs will appear on the buildings around you, but only when you take the lead--a sort of triumphant tribute to your personal style.

Need for Speed: Nitro is a good-looking game that boasts a dizzying sense of speed at all the right moments. You're afforded plenty of opportunities to leave your mark on the tracks with a good dose of interesting gameplay that is, for the most part, a lot of fun. It's unfortunate that the gameplay isn't more varied, but this is still a good, accessible arcade racer. 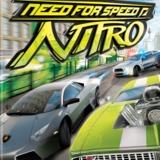 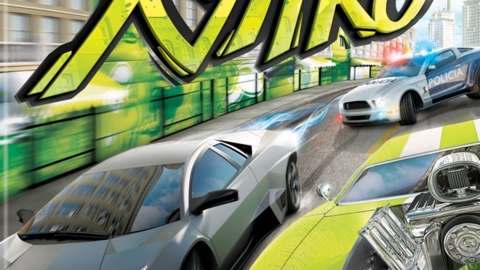 Need for Speed: Nitro is an arcade racer that features real-world automotive licenses.