If you're a college football fan and an Xbox owner, you can't go wrong with NCAA Football 2003.

NCAA Football 2003's most impressive feature is the dynasty mode, where you essentially take full control of a college football program. After you select your team, you'll have the option to select redshirt players, engage in preseason games, or just head off into the season. From there, you can decide whether or not you want to simulate individual games or play through the season yourself. If you're using a team that doesn't exactly have the highest prestige level, then you'll want to play through as many games as possible. Otherwise, your team will undoubtedly end up with a losing record, reducing the chances for a successful off-season of recruiting. Depending on your performance during the season, and the subsequent ranking you receive, you might get to participate in one of the prestigious bowl games or even fight for the national championship.

At this point the dynasty mode may not sound all that different from just a regular season mode, but when you go into the off-season, you'll start to see the depth that the dynasty mode has to offer. The first task at hand is to see which of your players are graduating or leaving over the summer and then decide which positions are the highest priority. For example, if you see that your starting quarterback is leaving after the season, and your backup isn't exactly the greatest, then you'll want to start your search for a rookie. It's also worth noting that any players leaving the school can be imported into Madden NFL 2003, so you can continue to develop their careers. NCAA Football 2003 lets you scout rookies from various states, and it will give you general information on each player's abilities. If you see a player that you're interested in, you can select him and see what his top three choices are and what his level of interest is in attending your school. You can also spend recruiting "points" to visit that player's coaches and then spend even more points by making follow-up phone calls. Not surprisingly, players in the Midwest or on the East Coast are much less interested in attending schools on the West Coast and vice versa, so you shouldn't really waste your time trying to get those players if your program doesn't have a high level of prestige.

Shortly thereafter, you'll receive a list of players (or in some cases you won't) willing to come to your school. Then you get to move on to training individual players, cutting the roster, and selecting starters. When you're all finished, you'll get to play through another season in the hopes of going to a bowl game or to the national championship or even winning the Heisman Trophy for one of your players. There's quite a lot of information to keep track of--so much, in fact, that casual football fans may be a little too intimidated by what the dynasty mode has to offer, in which case the "simulate" option (where all of these features are automatically determined by the computer) becomes a valuable feature. But again, if you're using a team with a low prestige rating, it will take a very long time for you to build a respectable program. It's worth noting that the simulate option in the Xbox version of NCAA is actually much faster than the one in the PS2 version, so you don't have to wait around nearly as long if you choose to simulate an entire season or the off-season recruitment process.

The dynasty mode is a major attraction for most college football fans, but there are a few other entertaining options as well. NCAA Football 2003 has a rivalry mode, which includes a list of the biggest school rivalries in the country, ranging from Cal and Stanford to Army and Navy. You can go into this option, jump right into one of the games, and possibly compete for one of the corresponding trophies, which you can add to your trophy display. There's also a mascot-game mode, where you can play an entire game using mascots, though unfortunately not every school is represented.

At the most basic level, NCAA's gameplay is identical to Madden Football's. On offense, you can sprint, use stiff arms, and use various juke moves to shake off defenders. You can also call different audibles (which can be adjusted by going into coaching options) while at the line of scrimmage. Of course, the most obvious difference between NCAA gameplay and Madden gameplay is the option, where a quarterback runs parallel to the line of scrimmage in hopes of luring linebackers in so he can pitch the ball off to the fullback. However, it'll take a few games or so before you get to the point where you can execute an effective option play, so expect to take a few losses when you're first trying it out. Even if you don't like the option, you'll find that basic running plays are highly effective, probably a little too much so, beyond what you'd find in a real-life college game. You can basically pound the ball right up the middle of the line using three or four different run plays and have a decent game, especially with teams that use the power-I formation. The AI never really seems to pick up on the fact that you're relying almost entirely on running plays, though there will be a few occasions when a linebacker will break through the line, but it doesn't happen enough to break you from your rotation of run plays.

Even more emphasis is placed on run plays because the passing game (both on the offensive and defensive side of the ball) has been improved. It's much more difficult to find that one passing play that you can always rely on. In the previous version of NCAA Football, throwing to a receiver running an out pattern would frequently get you seven or eight yards, and while this can still be useful, you'll find the cornerback AI is much more adept at swatting down passes. In fact, the defensive-back AI in general is quite good--you'll see a safety dive for a ball after it's tipped into the air, or you'll see a linebacker just bat down a strongly thrown pass. Additionally, passing is pressure-sensitive, so you can throw a bullet and risk it bouncing off your player, or you can float the ball in the air and hope that your receiver comes down with the ball. In either case, it pays to be precise, which is why the running game is so important.

On defense, you can make general shifts to the defensive line to compensate for a run play, or you can call different audibles to change your coverage. If you're playing as a defensive lineman, then you can execute swat or swim moves to try to get out of the grip of an offensive lineman and attack the quarterback. Tackling has been refined so that smaller players, like defensive backs, will have a much more difficult time taking down a fullback than, for instance, a linebacker would.

While the Xbox version has the same player models and stadium models as the PlayStation 2 version, NCAA Football for the Xbox looks a little cleaner and sharper. In addition, the lighting appears to be a little more pronounced, and the reflective surfaces on helmets are also a little cleaner, but none of this is drastically noticeable. Generally, the game looks great, and the player models and surrounding stadiums--which look nearly identical to their real-life counterparts--sport plenty of detail. However, a few of the faces on the player models look like they could have used a little more work, since they seem to retain that zombielike look that has plagued previous EA Sports games.

The play-by-play has also been improved in NCAA 2003. The play-by-play man does a great job of calling the on-field action, and the two color commentators will chime in with a few comments here and there. Thankfully, there's not much repetition in the dialogue coming from the booth, but occasionally one of their comments will seem out of place, particularly after a failed two-point conversion attempt when the score is lopsided. It's also worth noting that there are plenty of fight songs in the game, and most are quite good, but it would've been nice to have a few more schools represented.

There's isn't much of a selection of college football games on the Xbox at this point, but that really doesn't matter because NCAA Football 2003 offers the complete football experience. The rivalry games are incredibly entertaining, and the dynasty mode adds a tremendous amount of replay value to an already great game. 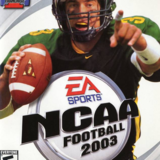