Deep on gameplay but light on content, NBA Street Homecourt's Xbox 360 debut is ultimately a great one.

When the original NBA Street hit the scene in 2001, it took the over-the-top basketball formula established by the NBA Jam series to the next level. Since then, enormous, rim-rocking dunks, intentional fouls, and blatant goaltending have been a part of nearly every play. Rather than simply adding more content and possibly making the latest game in the Street series too complex, developer EA Canada has trimmed the fat and focused almost entirely on simplifying and perfecting the gameplay. NBA Street Homecourt is easier than ever to pick up and play, and almost all of the new moves and dunks are fantastic, but thanks to a shallow career mode and a limited number of other gameplay modes, there aren't enough ways to enjoy it.

NBA Street's fast-paced, over-the-top gameplay is back, and it's as good as ever. The trick stick has been removed, but the new simplified controls work very well. Basic dribble moves are mapped to the X and Y buttons, and the really crazy stuff is performed by hitting one of those face buttons in conjunction with a shoulder button. As always, the more moves you make, the faster your gamebreaker meter fills. And if you really make a defender look bad, you'll earn a bonus for your trick points. As crazy as they are, the series' dunks are so frequent that they've almost become routine. Almost. Homecourt has breathed new life into dunks by adding a few twists. For starters, teammates will sometimes get down on all fours at the top of the key and act as launching pads. All you've got to do is run up to them and jump, and you'll soon find yourself high in the sky heading toward the rim for a vicious dunk. The biggest addition to the dunk repertoire is the double, and sometimes triple, dunk. A meter fills as you hold down the dunk button, and the longer you hold it, the more powerful your dunk. If you release the button too late, you'll get denied by the rim, but if you time it just right, you can dunk the ball, catch it, and dunk it again. If you do this during a gamebreaker, you can dunk the ball a third time. Multiple dunks are both awesome and awful. It's great when you're the dunker, but as the dunkee, it's maddening to lose a close game as a victim of a double dunk. It's bad enough when you're playing against a friend, but it feels downright cheap when the CPU does it.

After you've performed enough tricks and dunks to fill the gamebreaker meter, it's time to unleash some pain. Once the meter is activated, you've got a limited amount of time to score, but you'll want to take some time to perform as many tricks as possible because the more you refill your meter, the more points your bucket will be worth. As usual, the moves and dunks you can perform here are completely over-the-top, even by Street standards. While the game's focus is mostly on offense, you'll need to hunker down on defense if you're to rule the streets. Goaltending and fouling aren't just allowed--they're encouraged. The way you play defense is largely unchanged, and for the most part, it's very satisfying, especially when you're blocking shot after shot. The only negative aspect of the gameplay is that it's often very difficult to pick up loose balls, particularly if you're on defense. The CPU even has a difficult time picking the ball up and getting it back to the baseline after a bucket.

The one area in which Homecourt is lacking is the number of gameplay modes. You can play a basic game without tricks and gamebreakers or play games where points count only if they're scored with a full trick meter or a gamebreaker. However, none of those modes are particularly interesting. Online play offers up the same games, as well as leaderboards. While the game runs well online, it would have been nice for there to have been some sort of true online career mode. Because the other modes are so shallow, nearly all of the game's value is found in the Homecourt Challenge.

Homecourt Challenge is where you play on your local court, eventually make a name for yourself, and take on real NBA players on their homecourts. You start by creating a baller, but rather than altering individual features, you select from one of a handful of generic heads and then merge it with the heads of two NBA players. This means that you can finally find out what the love child of Steve Nash and Yao Ming would look like. It's every bit as horrifying as you might imagine. Outside of being sort of creepy, the create-a-player feature is quite limited. After you've created your Frankenstein baller, you assign him a position and playing style. Then, you head to the court where you can round out your squad of three by picking up some no-name locals. Once your squad is assembled, you'll play pickup games against other local players, and eventually, you'll get to take on teams made of NBA and even a few WNBA players. The rules for victory vary. Sometimes the winner is the first to score 21 or the first to lead by three points; other times, you'll only be allowed to dunk or take jump shots. Your created player's attributes improve slightly after each game, and when you reach a certain level, you can max out one skill by designating it as a "freak skill." This makes your player nearly unstoppable in one aspect of his game, and knowing you have a deadly shooter, shot blocker, or rebounder is invaluable in tight games against the CPU. You won't want to get attached to your teammates because you'll constantly be adding and dropping players to improve your team's talent level.

Part of the appeal of the NBA Street series has always been the great player animation, and Homecourt does not disappoint. Dunks are satisfying not only because they change the score, but also because they look powerful, leaving fallen players and bent rims in their wake. You never know what mind-blowing dunk you'll see next either. It might be a reverse, or a reverse with a flip, pump, spin, and a windmill. These moves look even better, thanks to a consistently snappy frame rate. The players look realistic, and because the game's roster is mostly made up of the NBA's better players, they're almost all instantly recognizable in-game and look even better in the replays. The real-life courts on which you play vary greatly in style and design. Most of them aren't instantly recognizable locales, but whether it's an indoor gym, beachside court, or urban setting, they all look nice.

It's odd that the developer decided to muck up all of the great-looking animations, players, and courts with a "retro" look. Everything is run through a filter that gives it a sepia tone. The idea was to make the NBA players' homecourts look as they might in home movies or pictures. This might make sense if there were any old-school players, but it's a safe bet that Carmello Anthony's home movies weren't shot with an old 8mm camera. There's no option to turn the effect off either. Eventually you can get past it, but it's still lame.

The game's audio also has a bit of a retro feel to it, but it works because it's cool. When you bust out a gamebreaker, you'll do so to the synthesized funk of Herbie Hancock's "Rockit." The outstanding soundtrack features artists, such as RJD2, Quincy Jones, The Jackson 5, DJ Shadow featuring Q-Tip & Lateef, the Herbaliser, and many more. On the court, players will talk trash, which itself is nothing new, but here it actually doesn't sound supercheesy.

There's a lot to like about NBA Street Homecourt's debut on the Xbox 360. The controls are easy to learn, the gameplay is as tight as ever, players look great and move well, and the soundtrack is top-notch. As any good game should, Homecourt leaves you wanting more, not only because it's so much fun, but also because there isn't enough to do. Earning achievements by performing tricks, playing online, and leveling up your character will keep you going for a while, but the Homecourt Challenge doesn't offer up enough depth, and the game is lacking in other modes. However, there are worse things you can say about a game other than it left you wanting more. 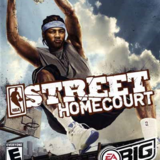 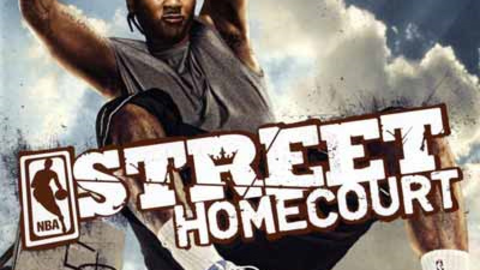 NBA street returns for a fourth time, merging legendary courts with the hometown courts of your favorite NBA stars.