Hardcore hoops fans, lapsed b-ball followers, and anyone else who even casually picks up the odd sports game should play NBA 2K13. Developer Visual Concepts continues to keep the bar high, enhancing the realism of and adding a superb new control scheme to this excellent recreation of pro basketball. Pace, graphics, animations, sound effects, and commentary are all so dead on that you feel like you've walked onto the court at Staples Center or Madison Square Garden. Only a few issues with the interface and the absence of controller tutorials, along with ridiculously overblown production values courtesy of guest executive producer Jay Z, get between you and the full appreciation of what looks, sounds, and feels like the real thing.

That said, this isn't a revolutionary upgrade on NBA 2K12. Last year's game is the foundation for this successor, which bases everything on what has gone before. Gameplay on the court is still incredibly true to real life. The pace, plays, artificial intelligence, and, well, everything else, mimic real pro basketball. Players move like they should, shoot like they should, and even position themselves smartly so you can make plays. Even playing solo, it feels like you're working as part of a real team due to the stellar AI. You can play selfishly and always look for the shot, but that tends to hurt your team more than passing and trying to develop plays. Same goes on defense, where you contribute by covering your man or providing timely help. Do that well and you feel like you're a part of the team even if you never touch the ball.

All of the offline and online modes of play are back for another season, so you can practice plays, run franchises, play one-off matches or the playoffs, hit the schoolyard for three-on-three blacktop action, mess around with legendary clubs, and so on. You can even make your own kicks now, through a 2K Shoes creator module. Most of the core options have been glitzed up. MyPlayer has been dramatically expanded and renamed MyCareer. You now not only create an NBA wannabe, you role-play him through all sorts of off-court situations. You can be a good guy or a heel, a Steve Nash or a Kobe Bryant. This means you get to dress up in flashy clothes and accoutrements for arriving at games, sign shoe endorsements, play egotistical brat when meeting with GMs before the draft, try to get your coach fired, and stir up fans on social media.

It's all faintly ridiculous, especially the scripted comments you make in meetings, and it adds up to a cartoon view of what the NBA is in real life. But it's also very compelling. These options let you personalize your career, and the whole me-first concept plays into the fantasy sports ideal that makes player-oriented modes of play in sports sims so appealing in the first place. Most goodies are bought with the VC coins awarded for accomplishments in-game, as well, so you at least have to do something on the hardwood (or spend your own cash by buying the things with real-world money) before you earn the right to detonate any ego explosions.

More historical greats have been included among the roster of teams. The headline is the inclusion of the full 1992 Olympic Dream Team, with even Charles Barkley finally letting his likeness be added to a game for the first time since 1994's Shut Up and Jam! So old-timers who want to see Jordan, Magic, Bird, Sir Charles, and pals on the court together again can finally do so. You can also pit this club against the most recent version of the dreamy Olympic roster from earlier this year to see what roster is really the best of all time.

Other iconic teams from the NBA's past are included, as well, like the Showtime Lakers and the Bad Boys with top thugs Laimbeer and Rodman. The game even has an absurd celebrity team starring the likes of Justin Bieber and various B-listers such as JB Smoove and Jersey Shore's Pauly D. Even a little guy like the Beeb comes in with sky-high ratings, too, so you can actually pit this team (the overall rating is a formidable 97) against any and all comers with a good shot at emerging victorious.

Players themselves have had their ratings revised in a key area, as well. All of the top stars in the NBA, and even a number of role players and sixth men, are now given signature skills that better reflect their real-life traits. So you have the floor general, who makes everyone on the floor play better offense. There's the closer, who raises his game in clutch moments. The eraser sends shots off with emphasis. The finisher can blast into the paint to slam layups and dunks no matter what traffic may be clogging the key.

These skills add an additional layer of realism to the action, since you see stars play like they really do. It's great to see the likes of Derrick Rose and Steve Nash running offenses as the floor generals they are in real life. This is really noticeable with the superstars, who all come loaded with half-dozen or so skills that give them an added edge to their games that separate them from everybody else. You always want to have your top players on the court for the situations that best fit their skills.

A more considerable upgrade to NBA 2K13 comes with the revamped control setup. The right stick is now the designated control stick. At first glance, this doesn't seem to be much different than the old arcade-happy right-stick controls that let you pull off all manner of tricks and shots. Now, however, the stick handles just dribbling and more intricate hand movements, or shooting with the help of a trigger press. So you can stutter, crossover, spin, drop back, and so forth with relative ease just by rotating the right stick.

This accessible control scheme is a more natural way to handle the ball--although you still need to use combos for special moves like alley-oops, spin layups, certain jump shots, and so forth. The stick also can't be abused to turn games into NBA Jam-style displays of acrobatics, as every use of it dramatically affects your energy level. Do too much and players get exhausted, which causes them to make dumb mistakes. You can also overhandle the ball and watch it fly out of your hands.

A lot of experimentation is required to figure out how the right stick functions, though. There is no tutorial to walk you through how it works. You just get a brief text screen intro telling you how cool the right stick is now, and then are left to fend for yourself. Just like basketballs themselves don't come with user manuals telling you how to dribble, the right stick feels so organic and natural that it might be hard to instruct players on how to use it in an interactive walkthrough. Still, a brief review of the changes here would have been appreciated. Expect to lose a few games while you get used to the right stick, especially when it comes to shooting. Over-use of it early on is also a pitfall, as you can play with the stick so much that you'll see your whole squad run to the bench out of gas.

Overall presentation enhances the you-are-there factor even more. Much of the visuals and sound seem to have been carried forward from last year, but that doesn't make it any less impressive. Graphical detail is incredible. Players are almost photo-realistic, and they come with animations that almost perfectly mimic what their counterparts do in real life. Watching Kobe drop one through the hoop while falling down and then fist-pumping over the shot and the foul looks exactly like something you see at Staples a bunch of times every winter.

Play-by-play and commentary from Kevin Harlan, Steve Kerr, and Clark Kellogg is voluminous and almost always accurate, to such an extreme that it seems like the lines have been recorded specially for each game that you play. This is far and away the best booth banter in sports gaming, with so much going on that you can get lost in the moment and forget you're playing a game. It's miles above the canned one-liners and recycled observations in other sports games.

One drawback of the presentation, though, is the confusing interface. 2K Sports always seems to have trouble with menu systems, and that has continued here with incomprehensible screens, dead ends, and a weird reliance on the right stick to pull up menus. It all looks snazzy at least, with overblown Nero-does-Vegas backdrops, apparently courtesy of executive producer Jay-Z. The hip-hop mogul and part-owner of the Brooklyn Nets gets his name on the box cover and all through the game itself, which kicks off with a video of him styling his way through action clips. It's all very over the top, with Jay-Z's presence taking precedence over the players in spots. His influence is felt in the soundtrack, as well, which is marginally better than the interface. It's pretty much all hip-hop and very repetitive, with virtually nothing aside from a few Coldplay, Phoenix, and U2 tunes to mix up the mood.

It's impossible to play NBA 2K13 without coming away for a renewed appreciation for pro hoops. Even if you might not be a big basketball fan, you need to check this one out. For starters, you need to see what you're missing. And second, you need to see just how much other sports games are lagging behind this absolutely brilliant piece of work, that absolutely nails the pace and feel of big-time b-ball. You couldn't get closer to the real game if you had Spike Lee's seats at MSG. The labyrinthine interface, lack of tutorials, and obnoxious Jay-Z production form a barrier when first warming up to the game, but the enhanced right-stick controls, depth, and sheer realism of everything will hook you after logging a couple of hours on the hardwood. 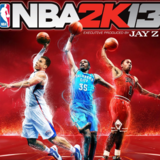 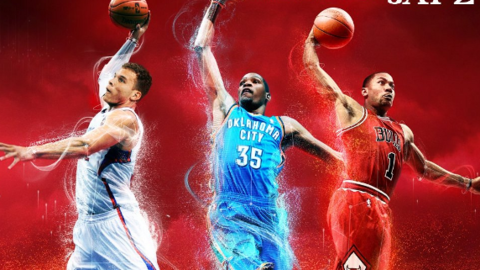 NBA 2K13 will let gamers pit the best players in NBA history against the new dynasty of talent, including the much-debated matchup between the 2012 U.S. Men's National Team and the 1992 "Dream Team."