NASCAR Thunder 2003 is an impressive update to last year's game.

As you might guess, NASCAR Thunder 2003 is the latest addition to EA Sports' popular and long-running stock car racing simulation. The previous Thunder game for the Xbox, the 2002 edition, shipped alongside Microsoft's console at launch, and it gave would-be racers a pretty good balance of arcade-style racing and stat-heavy simulation. A year later, Thunder 2003 is leaning a little more heavily toward the simulation side of things, and it's also bringing a host of new features and game modes to the table for returning players to sink their teeth into it.

You'll notice right off the bat that NASCAR Thunder 2003 comes fully loaded with gameplay modes, options, bells, and whistles. You can get your feet wet with the Quick Race mode, which allows up to four players to choose drivers, cars, and tracks for a brief trip around the loop without any extra hassles. Quick Race is fine for making some practice runs, but simulation-minded racing fans will find the real meat of Thunder 2003 in the Season and Career modes. Season has you and up to three others selecting a driver and car and taking on a full season of Winston Cup racing. The sole objective in the Season mode is to acquire enough points to become the season champion. In this mode you can control variables like number of races and race length, but you won't be doing anything outside the actual races themselves – it's straight from one race to the next. Playing one season isn't a big time investment, depending on your options, as you can finish one in a couple of hours.

Career is the real long-term game mode in NASCAR Thunder 2003. Imagine playing the Season mode 20 times back to back, throw in a whole lot of extra customization and strategy options, and you've got a good idea of what Career is about. Whereas Season has you picking from a stable of existing drivers, with preset sponsors and race teams, Career makes you construct everything from the ground up. In addition to customizing the look of your car (which can also be done in Season mode), you'll pick all of the sponsors for your car, your pit crew, and yourself, and you'll sign short-term contracts with them based on the money offered. You'll also hire every member of your race team based on their salaries and qualifications. Once you've got your car, sponsors, and crew assembled, you can embark on a 20-year career in Winston Cup racing. There's no end of the options in Career mode, giving you a lot to do besides just run your races. You can have your team working R&D on new enhancements for your car while you cut better deals with more lucrative sponsors based on your performance. In fact, you don't eve have to run the races themselves – the game will simulate the results for you, if you're only interested in the statistical aspect of your racing career. Career is definitely where hardcore racing fans will spend the most time in Thunder 2003.

New this year to the franchise are the Lightning Challenge and Thunder License game modes. Lightning Challenge presents you with a group of actual racing scenarios from Winston Cup history and drops you into the hot seat to complete the task at hand. Each of these scenarios is set up exactly like it happened in real life, giving you the chance to relive glory, and in some cases, change history. Thunder License lets you pick a personal racing coach from a list of NASCAR drivers, all of whom contributed voice samples to the game. Then you hit a track of your choice and let the driver you've picked coach you to faster times on that track. Each track has three time goals to complete. By finishing these challenges you can earn Thunder Plates, which are simply custom license plates. Earning enough Thunder Plates will let you unlock new drivers, cars, and such. These new game modes are a good nod to variety, and they'll give you something to do when you've tired of simply racing the regular modes.

The actual racing itself in NASCAR Thunder 2003 is a pretty complicated affair. If you've never played a NASCAR game before, you'll gain new respect for the drivers that participate in the real sport as you try futilely to make it around a turn without eating the wall. After enough practice, you'll realize that running a smooth race depends on a delicate interplay between acceleration and braking. In short, there's a lot more skill required here than it might look like on the surface. During a race you also have ratings for your damage, tire wear, and fuel, meaning you'll have to strategically decide when it's best to hit Pit Road for repairs. The drivers are aggressive, even at the lowest difficulty setting, so you'll have a lot on your hands at all times. Racing in Thunder 2003 can be difficult and frustrating at times, but once you get the hang of it, it's gratifying to see your standing constantly increasing.

Like all good third-party sports games, NASCAR Thunder 2003 is out for all three major consoles. In terms of gameplay and features, the three versions are identical. As you might expect, though, the Xbox version of Thunder 2003 is without a doubt the best looking. Its racing visuals are of higher resolution than those of its GameCube and PS2 counterparts, with a higher frame rate and slightly nicer lighting effects. All three of the games look good, but a slight nod goes to the Xbox version, if they must be compared. The graphics are quite good overall in the Xbox version--the cars are rendered in very nice detail, with detailed textures and reflection effects. The game never has any significant frame rate issues, even when all 43 cars are roaring down the track at once. Sound-wise, Thunder 2003 is reasonably good. The race announcers are perfectly serviceable, and the radio chat from your team is actually pretty helpful in the middle of the race, as they advise you about your distance from the lead, cars about to pass you, and other such pertinent info. Unfortunately, all of this can be lost in the roar of the engines and the screech of clashing metal, so you'll most likely have to fine tune the volume settings to make the voices audible. Other than this minor issue, the sounds in the game are quite good, with the possible exception of the repetitive nu-rock soundtrack that plays during the menus.

Overall, NASCAR Thunder 2003 is an impressive update to last year's game. The core gameplay remains solid and is perhaps a bit more focused, and the game gives veteran racers not only the latest drivers, cars, and tech, but also a good number of new gameplay modes and features to play with. Yearly sports franchise updates don't always provide enough of an upgrade to even warrant their existence, but in this regard, NASCAR Thunder 2003 definitely satisfies. 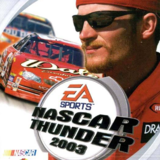 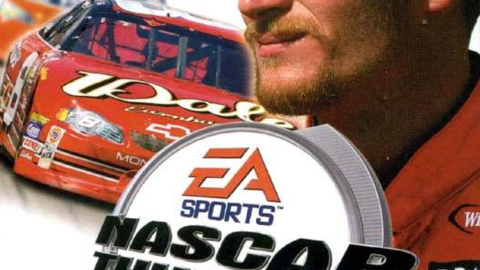 NASCAR Thunder 2003 is an impressive update to last year's game.