Ultimate Ninja capably captures the spirit of Naruto, delivering a stylish fighting experience that's both easy to pick up and easy on the eyes.

Though he has yet to achieve the cultural ubiquity or pervasive merchandising of Goku and friends, there's definitely a strong correlation between Shonen Jump's Naruto and the Dragon Ball Z series. Both are solid middle-school power fantasies with a serious focus on straight-up combat, and they've both got a sense of humor and a certain winking acknowledgement of their more ridiculous moments. Naruto: Ultimate Ninja marks his first appearance on the PlayStation 2 in the US, and not only is it a far more polished production than Naruto: Clash of Ninja, released earlier this year for the GameCube, but it's flashy enough and accessible enough to appeal to those unfamiliar with the story of this nine-tailed-fox-demon-turned-aspiring-ninja.

Naruto and the lion's share of both his friends and foes are practitioners of a fantasy version of ninjitsu that affords them incredible agility, speed, and strength, allowing them to jump high up into the air, teleport short distances, run straight up sheer vertical surfaces and on the surface of water, and perform some genuinely crushing attacks. There's also a mystical side to their abilities, in that they can use special ninja scrolls to summon awesome elemental powers and supernatural allies. There's rarely any shortage of fighters trying to outdo each other with their spectacular abilities, and this comes across palpably in Ultimate Ninja's gameplay.

The action in Ultimate Ninja is fast, and also perhaps a bit mashy, but it's got a great deal of style and doesn't take too long to get the hang of. The X button jumps, and tapping it twice will produce a double-jump. Though the visuals are largely polygonal, the action is similar to a 2D fighter, except that each stage has multiple planes, which you can instantly teleport to by holding up or down, depending on your current position, when hitting the X button. There's a little tactical advantage to this, since power-ups and friendly characters looking to aid the fight will randomly appear across the stage, and it can be a good way to quickly evade an attack; but mostly it just allows for bigger levels and more craziness.

The square button can be used to throw your standard shuriken as well as any special power-ups you might've picked up, which can range from a gigantic shuriken to assistance from another character, but you'll mostly be using the circle button to launch attacks. Each character has a dozen or so different attacks, though you can expect to see a lot of shared moves between most of the characters, which basically means that they all play very similarly and once you've mastered one, you've basically mastered them all.

Unique to each character, though, is a multitiered super attack that you can tap into with the triangle button provided you have enough "chakra" energy, which you can collect off the battlefield. Successfully initiating a super attack cuts away from the action to a series of dramatic camera angles, during which you have a limited time to enter a series of onscreen button commands to keep the attack going, or if you're on the receiving end, to minimize the amount of damage it does. These super attacks are great to look at and can often be ridiculously over the top--Naruto himself, for example, can summon a gigantic toad to decimate his enemy, or he can create the illusion of a group of bikini-clad ladies to distract his opponent, while Kakashi will casually read a comic book while dishing out incredible damage. Stuff like this adds a lot of flair to the action, and it's great that each character has three different special attacks depending on how much chakra they have stored up, but they're so easy to trigger that it's not uncommon to see the same special attack several times in one match. They're reminiscent of some of the best moments in Dragon Ball Z Budokai 3, another well-crafted anime-inspired fighter, but they crop up a little too often, losing a bit of their dramatic potency.

The super attacks represent some of the most visually impressive moments in Naruto: Ultimate Ninja, but the game is consistently great-looking even during regular combat. The 12 stages included in the game are all nice to look at, with plenty of detail that gives each some unique flavor--you'll fight in a forest clearing, in a dense Asian city, atop a ruined temple in the middle of a storm, and on more than one occasion, on the surface of a body of water. The combatants are razor-sharp, with lots of fast and powerful-looking techniques and a clean, underplayed cel-shaded look.

What really makes the characters look quite striking, though, is a technique that makes shadowed areas appear hand-drawn, making them look much more as they did in the original Naruto manga. It's a really clever effect, and Ultimate Ninja employs several other tricks to convey a comic book feel. Massive attacks are often accompanied by gigantic onscreen Japanese characters, and the dialog sequences between fights show minimally animated 2D characters framed inside comic book panels. The gameplay is fun enough, but it's the presentation that really makes it hard to look away from the game. The employment of the US voice cast of the Naruto anime furthers Ultimate Ninja's authenticity, though even the most diehard Naruto fans will eventually tire of hearing him exclaim "Believe it!" at the end of every other sentence. The music is also notable for the way it blends traditional Japanese music with trace amounts of hip-hop and techno without being too grating or corny.

Compared with the inspired presentation and somewhat unique gameplay, the modes of play in Ultimate Ninja are a little pedestrian. The scenario mode puts you through a lightweight story mode with each of the game's characters, which just consists of half a dozen or so fights. It's nothing too special, but there are more than a dozen characters to play, which means there's plenty of fighting to do here. If you're looking for a more specific challenge, the mission mode presents you with a series of fights that you not only have to win, but win while also fulfilling other certain conditions. These can include acquiring a specific power-up over the course of the match, retaining more than half of your own health, or beating your opponent within a specified amount of time.

The mission mode can be exceptionally challenging, partly because some of the win conditions become increasingly demanding, but mostly because even at the normal difficulty level, the artificial intelligence in Ultimate Ninja puts up a real serious fight, unafraid to constantly be on the attack and make liberal use of special attacks. Luckily, a practice mode is included so that you can hone your skills. Winning fights in both the scenario and mission modes earns you cash, which you can spend in the game's shop on odds and ends like voice samples, character models, and video clips of special attacks. Though the AI in Ultimate Ninja can easily hold its own, there's nothing quite like taking on a real live opponent, and to this end the game offers some simple two-player versus action. It's sufficient, but no more than that.

It's ultimately to the game's benefit that the gameplay errs more toward accessibility than complexity, even if that might mean that hardcore fighting-game fans won't find what they're looking for here. Actual fans of Naruto, however, will be getting plenty of fun and fast-paced action that does the source material justice, and it's an experience that can be enjoyed by anyone who doesn't take their fighting games too seriously. 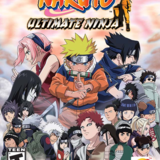 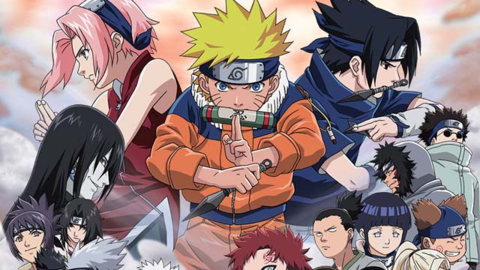 Naruto: Ultimate Ninja is a fighting game based on the popular anime in Japan, which features 14 playable characters and fighting on two planes.