In the end, this volume is a real letdown.

The Namco arcade libraries must be wearing thin. While the first two volumes of Namco's Museum series boasted classics like Pac-Man, Mappy, and Xevious, the third installment doesn't carry that same head of steam with it. With Namco Classics v. 3, you receive a couple of hits, but have to walk a few dogs as part of the bargain.

The main attraction on this volume has to be Dig-Dug. For you youngins out there, the game features a little guy with an air pump (Dig-Dug) who digs underground tunnels searching for Pooka and Fygar, two crazy-looking monsters who eat Dig-Dugs like they're going out of style. The object is simple - find all the Pookas and Fygars and pump them full of air until they explode. The game is completely addictive and may be enough reason by itself to pick up the package.

Ms. Pac-Man was the insanely popular sequel to Pac-Man, and it added several different mazes to the game, as well as adding a female character in the hope of dragging women of the 80s into arcades. It worked, and Ms. Pac-Man was nearly as big a hit as the original, which only added to the rolling keg of fury that the entire Pac-Man series encompassed.

The number three game on the package has to be Galaxian. It took Space Invaders, tossed in some color, and added diving enemies to the equation. It was a large scale hit in its day, but was quickly overshadowed by Galaxian's successor, Galaga. The other three games on the package are lackluster in comparison. Pole Position II features four tracks of racing and is compatible with analog driving controllers such as the Negcon, but lacks the small amounts of speech that the original arcade version contained. The Tower of Druaga is a maze game with some RPG elements that seem like a nice idea, but don't really stand up to the test of time. Phozon is a complete pile of trash that would fit into a puzzle category fairly easily. Players control a small circle and must construct shapes by attaching pieces to the circle while avoiding the evil Phozon. The shapes get larger and harder to construct, but you'll likely lose interest long before the game gets that hard.

If you've already bought the first two volumes, you may want to continue your collection for completeness' sake. If you don't care about owning all five volumes, you may be better off leaving this one out. In the end, this volume is a real letdown, and from the looks of the titles left, the series should be all downhill from here. 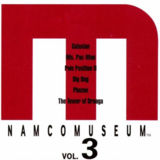