What starts out as a simple but entertaining aerial jaunt quickly becomes monotonous and shallow, making it hard to justify its price tag.

There's a scene in the Story mode in MySims SkyHeroes where the elder pilot of SkyForce (the group of pilots fighting the evil MorcuCorp) asks everyone if they know what he's about to ask them to do. Suddenly, the other pilots of SkyForce have a look of abject apathy on their faces as they realize he's about to send them on another wargames mission. That same look will suddenly be transposed to your face as you realize that this is the very same dogfighting mission you've already played several times before, and it won't be the last. Therein lies the biggest problem with the single-player experience in SkyHeroes--filling out an entire Story mode with just two game types that hardly ever change over the course of dozens of missions.

The first of these game types you experience in the Story mode is dogfighting, which initially doesn't seem all that bad. You start out by customizing your pilot, as well as your plane, which is pretty fun because there are plenty of parts to choose from. As you progress through the Story mode, you can unlock additional customization options for your sim, as well as necessary upgrades to your plane. If you get far enough, characters from other EA games, like Commander Shepard from Mass Effect or Isaac Clark from Dead Space become available. Sadly, these don't really act as much incentive to play through the Story mode because they're available from the start in the quickplay option. Additionally, their inclusion is just cosmetic as you have access to the same aerial maneuvers (barrel rolls, flips, and the like performed with the right analog stick), as well as weaponry in the form of machine guns and power-ups scattered throughout a map.

The responsive and straightforward controls in SkyHeroes make it easy to jump right in and start your career as an ace dogfighter. But these confrontations quickly falter after that because of the way both enemy AI and teammate AI function during a match. To put it simply, enemy fighters cheat in some fairly ridiculous ways. Once you have a foe in your sights and then launch seeking missiles, they have the uncanny ability to nearly always avoid them with successive evasive moves that seem almost impossible to perform on your own. Secondly, if you engage enemies close to objects in the environment, like a volcano for example, they will almost always perform exasperatingly precise maneuvers while making contact with the surface of the object. This scenario should make them easy kills, but the fact that collision damage doesn't really factor into the game makes it that much easier for AI to cheat.

What makes these dogfighting missions in the Story mode all the more infuriating is that your so-called teammates aren't really on your team. They have a tendency to swoop in and steal your kills after you've chased an obnoxious AI pilot all over the map and worn them down.. Normally, this wouldn't be so bad if that meant they didn't also steal points necessary to progress past the mission at hand--just imagine that happening in the closing seconds of a match and you can picture how completely frustrating these dogfights can be. Ultimately, you're not only competing against enemies, but you're also frequently competing against teammates that are supposed to be on your side.

Suffering through this same scenario repeatedly makes the Story mode in SkyHeroes a tedious affair--the only respite is the second game type available: races. Fortunately, the point of races really isn't to take down enemy pilots, so it doesn't possess the same irritating characteristics as the dogfighting, but it does have a set of its own unique problems--the most egregious of which is the horrid rubber-band AI. No matter what you do, it's nearly impossible to be in first for the majority of the race, unless you get lucky with power-ups like the shield or the speed boost. Still, another pilot will almost always shoot you down or simply overtake your plane in a manner of seconds, but if you happen to fall behind, then all of the pilots in the course will slow down until you get back into a competitive zone. It's just not fun when it feels like no amount of skill really factors into your race performance. As long as you hit all the gates in proper order and don't do anything terrifically stupid, you should be fine.

There are some slight variations to the mission structure where you have to take down some stationary targets, but for the most part, it's just dogfighting and racing in the Story mode with all of their shortcomings in tow. Thankfully, there are online and local splitscreen multiplayer options in SkyHeroes where you can jump into one of these two types of matches (as teammates or in a free-for-all) without the sometimes humorous but often unnecessary story elements bogging everything down. Certainly, there's some fun to be had in multiplayer, particularly for newcomers who might get a thrill out of taking down their buddies without having to worry about horrible AI. But it's short lived. Experienced pilots will often find themselves circling each other until one decides to break off out of boredom and while the weapon power-ups sometimes shift the balance of a match, they're not all that difficult to avoid.

Not surprisingly, SkyHeroes' visuals fall in-line with the overall simplicity of the game. There's a wide variety of themes for each environment, but none of them are particularly detailed or remarkable in any specific way. The character designs are pretty great--if not stereotypical--cartoon-ish representations of pop-culture groups that make the game more engaging for children and create opportunities for some tame adult humor. Meanwhile, the music doesn't really fit with the overall theme of the game. In fact, it often sounds like it would be better suited to some big blockbuster action movie than to a semi-whimsical dogfighting game. Granted, it's not so jarring as to become a distraction, but it sounds out of place.

MySims SkyHeroes isn't quite full retail price (it comes in at $49.99) on the Xbox 360 or PlayStation 3, but it really seems like the game tries its best to make it worth the normal cost. The problem is SkyHeroes stretches two relatively shallow, albeit accessible, game types over an excessively long Story mode where their AI problems are put on display over and over again. The multiplayer can be a source of some entertainment, but only lasts as long as the learning curve does--which is to say, not that long. Once players become experienced, it often just becomes a race to see who can gain the strongest power-ups while they're not flying in circles. This might have worked well as a smaller, more limited, and cheaper downloadable product, but as a full retail offering, SkyHeroes never gets off the ground. 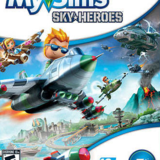 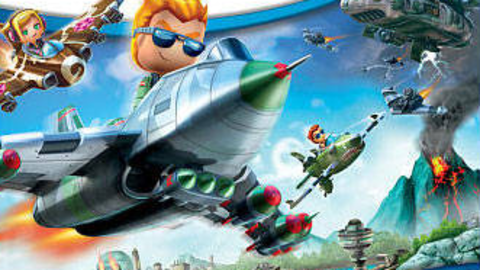 You take to the skies to lead the resistance against Morcubus and his drone army and stop his plans to take over the skyways.