Too much construction and not enough socializing keep MySims from really flourishing.

MySims is a straightforward open attempt by Electronic Arts to bring The Sims to the Wii, a potentially potent cocktail when you consider the mainstream appeal exhibited by both. This isn't the first time The Sims has taken a stab at console relevance, and like previous attempts, MySims streamlines the experience, making the game more accessible, adding firmer game structure as well as its own whimsical presentation. The result is a game that's almost as reminiscent of Nintendo's own Animal Crossing as it is The Sims. It's an easy game to pick up, and it's got some cutesy charm, but it doesn't quite capture the addictive qualities of the games it takes after.

While previous console outings for The Sims have usually relied on the pragmatic art style of the PC original, MySims builds its look around charmingly blocky characters who live in a similarly blocky town. Though simple, the visuals aren't crude or thrown together, and it's largely the game's sunny, playful visual style that sets the mood in MySims. A suite of cheerful, location-specific tunes carry a certain amount of that load as well, and there's even a smattering of simlish to help remind you that you're indeed playing The Sims. The game's cartoonish presentation ultimately benefits the whole experience, making the silly, sometimes bizarre happenings common to The Sims seem more reasonable.

Your first exposure to the game's visual style comes when building the sim you'll actually be controlling in MySims. It's pretty basic for a character creator, and its most noteworthy aspect is an apparent lack of regard for gender roles. You won't actually choose your sim's sex, and you can freely mix male and female hairstyles, eyes, mouths, and outfits. From here your potentially androgynous avatar will then be dropped into a run-down little village, where it's up to you to rebuild to its former glory by bolstering its population using your interior design skills.

Right off the bat you'll be given two structures to call your own--a workshop and a home. Or, rather, you'll be given the pieces you need to build a workshop and a home. Construction is simple, relying on a diverse collection of prefab boxes and bric-a-brac that you can drag about using the Wii Remote. When you pick up a piece of flair for your structure, you'll see blue dots wherever you can actually place them, and though there are several different-themed sets of building blocks you can choose from, the game will always first present pieces that are most appropriate for the structure you're building. Curiously, there's apparently no correlation between choices made when building the house and the actual layout or floor space inside the house, which often means that an apparently two-story building will actually only have a single floor. It's a weird disconnect, but it's an easy one to roll with.

Once you've got your workshop and your house in order, you can get down to the business of civic pride. Before you can start attracting new residents, you'll have to spruce up the existing homes and businesses in your town. By approaching and chatting with a current resident, you'll be asked to build some piece of furniture for them, which you can do in your workshop. Here you'll be presented with a translucent 3D blueprint of the furniture in question, along with several pages' worth of simple polygonal shapes. Building furniture is easy, as the game highlights the pieces you need in green, and grabbed pieces will snap into position when you get them close enough with the Wii Remote. You'll also find that you don't need to fill in every single piece of a blueprint to make a successful piece of furniture, and at a point the game will actually encourage you to start building outside the blueprints. As you progress, you'll earn blueprints for more ornate furniture, but the real big catch when building furniture for residents is that they'll always ask for you to include a number of specific types of "essence" in your design.

Essence is, well, essential to the experience in MySims, acting as the sole resource in the game. There are seemingly dozens of different types of essence, ranging from apples to 8-balls, and they can be earned in a number of ways. Some can be had just by chatting with another sim, with different sims dropping different types of essence. Some grow on trees, which you can tend to by watering and fertilizing, and you can even plant one of these tree-borne essences to grown a new tree. Some can be fished out of various bodies of water, while others can be found in designated areas with a metal detector and then dug up. You'll spend a lot of time scouring the earth for essences, and though fishing and prospecting with the metal detector add some simple minigames to the process, it's still kind of a grind.

Once you've actually got the essences you need for the furniture in question, you can apply it either as a physical icon or as paint, the latter of which usually ends up being the more elegant solution. Part of the challenge of building furniture is figuring out how to cram all the essence you need into a piece of furniture, though this doesn't always necessarily result in the most well-designed piece. It doesn't take long to figure out that there are different personality types among the residents, and that each reacts favorably to specific types of essence. You can improve your standing more quickly by slathering their furniture in those essences, as well as by decorating their houses with frills that appeal to that personality type.

By building furniture for and decorating the homes and businesses of the established residents, the town's star rating will improve. Whenever you reach a new star level, new people check into the hotel in town, at which point you can invite them to move into one of the town's empty lots. Part of what makes MySims approachable is that it takes its time introducing concepts, and lets you play with them for a while before adding new kinks and complications. After a few hours, though, you'll hit your stride, and a pattern of building houses, scouring the landscape for essences, and then building furniture with them emerges. How long it takes before this process loses its charm will depend almost entirely on how much joy you get out of creating customized furniture.

As easy and intuitive as the construction aspects of MySims are, they don't make up for the fact that the social dynamics that have been central to The Sims are all but absent. Your own sim doesn't have to worry about eating, sleeping, hygiene, holding down a job, or any of the other concerns that have plagued sims since the year 2000, and your interactions with other sims are limited, and almost always end up revolving around building something or collecting essence. These choices arguably allow the game to move more quickly, but they also obliterate any emotional connection you might feel towards these little virtual people.

The pleasantly goofy production and the ease with which you can build houses and furniture make it easy to burn a couple of hours with MySims, but it's ultimately more successful as a virtual dollhouse than anything else. 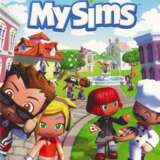