Little house on the Portia prairie.

My Time at Portia starts off predictably when you disembark into its expanse of rolling hills and curious ruins. Like the Marvelous Interactive titles it clearly draws inspiration from (namely Harvest Moon and Story of Seasons), it sets you up with the holy trinity of prologues: a father, a child, and a ripe plot of land. No time passes at all until you're welcomed by a well-meaning public servant who tells you that your absent parent left a legacy of building and being a Home Depot whiz before disappearing like the evening tide. Now, fresh off the boat, you're tasked with taking over for your old man and making yourself invaluable to the people whose lives he enriched, which suggests My Time at Portia will be a more fulfilling adventure than it actually ends up being.

Portia has a distinctly post-apocalyptic feel, which lends a sense of intrigue to what would otherwise have been a familiar traversal of yet another sleepy town to be spiced up by the voiceless city-slicker of a player-character. The game paints a tidy, watercolor-inspired picture that wouldn't be out of place on a postcard; a "wish you were here" would fit nicely against the giant, scraped-out husks of metal that loom over lush fields and quaint cottages like relics from a bygone age. In fact, they are: Humanity in My Time at Portia is said to have gotten too ambitious in the past by exploiting technology and science to reach lofty heights that it was struck down for. Now, it's back to the Agrarian Age for the foreseeable future, and you're the closest they've got to Noah and the Ark.

These monolithic reminders dot the various landscapes of My Time at Portia, and they're an effective and unintrusive way to ensure you're clued into the broader message around hubris leading to the apocalypse. It makes for an interesting plot device, which would be well-utilized if it went beyond making the world more visually interesting, or even beyond the inclusion of one faction of NPCs dedicated to keeping the town of Portia back in the comparative Dark Ages. But that's about as far as it goes: aesthetic as opposed to substance. No storylines really pursue it, nor do the townsfolk seem to care. You're not provided with the opportunity to engage meaningfully with the setpiece of the world's past, which is a shame given how interesting it seems.

Instead, the majority of the experience remains relatively familiar and unbroken by a loop of crafting, fighting, and gathering missions. The crafting system is the game's real treat, though. As the child of a master-builder, you're given access very early on to plans created by your father. These plans function like crafting blueprints; they stay on your person as you romp around the world in search of materials, and you can easily refer to them and check exactly how much tin ore you need to convert into whatever arbitrary amount of bronze bars you need to prop a bridge up.

You're also given the ability to use a crafting station back at your house which tells you exactly what you're missing to build a particular item. There's no need for guesswork, and you also get to visually appreciate the nitty-gritty of what you're building as completing various parts of items sees them come to life before your eyes on the workbench. This wonderfully intuitive approach ties neatly into what you're told is the protagonist's innate skill as a crafter, which means that you spend less time wondering how many rocks you have to crack open and more time thinking about the next great creation taking shape in your backyard.

Crafting is also the only aspect of the game that feels integral to actually getting anywhere with the story--everything is expensive, and the most effective way to make money is to grind out crafting items to sell. But while the reliance on grinding isn't a surprise if you're a genre fan, the combination of quick day-night cycles in the game, timed quests, and the time commitment needed to actually get anything crafted is a recipe for dissatisfaction. Time feels like it crawls by unless you're occupying yourself with busywork, which unfortunately ends up detracting from the charm of the lively hustle and bustle of the town of Portia.

However, while the crafting is robust and an essential part of your experience with My Time at Portia, the other integrated systems--relationship management, dungeoneering, animal husbandry, and farming--aren't as engaging, fleshed out, or vital by comparison. Being able to gift your way to a perfect marriage does a disservice to some of the unique personalities that you can court, and you feel discouraged from spending time on farming because of how time-consuming and expensive it is to acquire enough land to turn those parsnips into a profit. The main story forces you to invest heavily in crafting and once you’ve tried your hand at the carpentry trade, it can be hard to look elsewhere when the demands of time and money limit your ability to engage in the other systems.

Among the cacophony of mechanics, there's a wistfulness for depth. An upgrade system has you picking various skills, ranging from increased experience gain to a higher chance of getting more items, each time you level up. But it's hard to actually feel the effect of these perks, and there isn't one clear build which gives you a significantly better performance over the rest. Min-maxing attributes is rarely the point of lifestyle sims, so it makes sense that rewards seem more like a little bit of gas in the tank rather than a whole new engine. But failing to actually use your skill points on anything is unlikely to disadvantage you at all, which cheapens the purpose behind giving you a mountain of options in the first place. Being a little bit more efficient at carrying out objectives in a game that's all about repetitive grinding isn't a bad thing, but you find yourself wishing that the improvements afforded to you were more significant for the time invested.

Your time at Portia is likely going to be an idyllic one, interspersed with chores and chatter and putting household items together for your neighbors. You'll spend your time idly dangling your legs off the edge of the pier, participating in fishing tourneys, ushering in holidays with your partner, and fending off local wildlife. However, the ruins of a time long forgotten will always darken the horizon, and there'll be a part of you that wonders what more there could have been before you find yourself shunted to the next life goal in a long series of life goals. That feeling is unfortunately hard to shake, and it's a shame that there's not as much to the world of Portia as first appears. 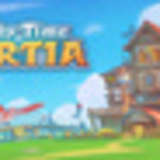 Ginny Woo is a veteran of the Harvest Moon flavor of lifestyle simulators, even though she's since put way too many points into the Stardew Valley skill tree since those early years. Ginny played My Time at Portia for about 50 hours across both the Nintendo Switch and PlayStation 4 versions of the game. Code was provided by the publisher.