With high-profile games such as MotorStorm and Dirt already released on the PlayStation 3 and Xbox 360, the bar has been raised for recent off-road racing games. Rainbow Studios' MX vs. ATV Untamed feels a lot like previous entries in the MX vs. ATV series and, as a result, doesn't meet that same standard of quality. Nevertheless, despite its problems, Untamed manages to be a worthwhile and jam-packed off-road racing experience.

As with previous versions of the MX vs. ATV series, Untamed tosses in a mess of rip-snorting off-road vehicles your way: everything from your standard MX bikes and ATV quad racers, to dune buggies, monster trucks, and even pocket bikes. The different vehicles have their handling quirks--for example, MX bikes are more nimble but less stable than ATVs --but all of the vehicles are governed by Untamed's fast-and-loose take on physics. The result are vehicles that are able to make epic jumps, turn and twist in midair, and, if you're careful, land with four wheels on the ground and minimal damage to vehicle or rider.

However, landing those jumps can be a dicey prospect. When tackling the largest jumps in the game, you never really know for sure when or if your rider is going to be eating a mouthful of dirt after a nasty-looking crash. Of course, part of this is a result of the game's rhythm-racing concept, in which the player is required to preload jumps by pulling back on the left analog stick and pushing forward at the lip of the jump to add extra height and distance to the jump. Learning when and where you need to preload is one of the skills required for making your way through the game. Unfortunately, Untamed is inconsistent in its approach here. Often what seems to be a perfect approach for a landing will result in a painful-looking and time-wasting spill.

As a result, gameplay in Untamed is an odd mix; the game encourages players to pull off massive jumps and chain together continuous trick combos but, because of the touchy physics, it often seems as if the game is fighting itself, preventing the player from landing those tricks. This is most pointedly felt in the freestyle events in the game's huge X-Cross Tournament single-player mode. The X-Cross Tournament will have you driving every type of vehicle in the game and playing in practically every single mode available as you make your way through a linear tournament.

Unlike the race modes that make up the majority of the X-Cross Tournament, the freestyle events are solely trick-based. Here, racking up trick points is the goal and, unlike the rest of the mode, the game's arcade physics seem bent on preventing you from succeeding at, or indeed enjoying, these freestyle events at all. One peculiar quirk of the X-Cross Tournament is that you can't restart an event once you've begun it, so if you fall behind quickly, you'll still need to finish the event completely before going back and trying again.

If frustration sets in during the X-Cross Tournament, the good news is that you can always move on to something else. Untamed is packed with things to do. In addition to the aforementioned X-Cross, the game has a number of event series (nationals, supercross, supermoto, and so on) to take part in, as well the ability to customize single events of your choosing. Then there are the multiplayer options, including split-screen, LAN play and online play for up to 12 players on the Xbox 360 and eight on the PlayStation 3 version. Though the online racing is straightforward enough, you can also check out some online minigames, such as Snake (think of a dirt-themed version of Tron's light-cycle game) or Tag, which challenges you to grab and keep a ball for a full minute. Each time you're "tagged" by an opponent, the ball changes possession.

Perhaps the starkest difference between the Xbox 360 and PlayStation 3 versions of Untamed--apart from the lack of rumble in the Sixaxis controller (which is especially noticeable in an off-road racing game full of bumps and jumps)--are the graphics. The Xbox 360 version looks superior in practically every way, with a superior frame rate, less aliasing, slightly sharper textures, and less graphical pop-in. Playing Untamed on the PS3 will result in some noticeable frame-rate chop in the corners, especially when multiple vehicles are making their way through the turns. Regardless, neither version of Untamed is a graphical showcase, with frequently indistinct textures that are especially noticeable in the lineups before a race begins.

The vehicle roster in Untamed is defined by its variety, and the same can be said for the game's racing environments. The open-door events are the best in the game; they're typically faster and more wide-open, with just enough narrow passages and tricky sections to keep you on your toes. On the other hand, the indoor events, namely the supercross events, are more technical by nature. As a result, supercross events are far more demanding (read: frustrating) because even the smallest mistake can put you off your rhythm or, worse yet, off your bike completely. A couple of new modes can be found in Untamed. One is endurocross, which you can think of it as an indoor supercross course with rocks, ponds, and logs as your obstacles, but it's a bit too plodding to be fun. Nevertheless, Untamed's best, most imaginative tracks are full of drastic elevation changes and challenging, high-speed series of jumps, and these are sure to give race fans the thrill they're looking for. In keeping with the game's "kitchen sink" approach, Untamed has a huge variety of difficulty settings. For example, in the early X-Cross Tournament events, there are nine artificial-intelligence difficulty levels to choose from, though that number shrinks as you progress through the tournament.

With Untamed, the formula for the MX vs. ATV series hasn't changed much, and the game is at its best when focused on freewheeling, pedal-to-the-metal speed. There are moments of abject frustration--think of the most tedious of the supercross events and practically any freestyle contest--but that frustration is mitigated somewhat by the fact that there's always something else to do in the game. Sure, it's more of the same with MX vs. ATV Untamed, but at least it's a lot more. 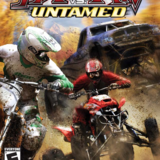