If you want to play Mortal Kombat II over the Internet, then this is what you've been waiting to play.

While the original Mortal Kombat certainly created a stir, it was Mortal Kombat II that absolutely blew up and made Midway's fighting game into a series that continues on to this day. The 1993 arcade game did everything you wanted a sequel to do: It gave you new characters, a healthy number of new moves, cutting-edge graphics (well, cutting edge for 1993, anyway), and a perfect reason to hang out in seedy arcades at all hours of the night. It's been successfully ported to multiple home machines over the years, and now it's back again as a downloadable game for the PlayStation 3. While certain aspects of this emulated classic could have been done with a bit more care, the bottom line is that this is MK2 with online play, and the online play works just fine.

Mortal Kombat II was a huge hit because it took everything that made the first game cool and built upon it. The graphics improved, making the gory fatalities even more over-the-top. Watching Jax rip off the arms of his opponent or seeing Kung Lao slice a dude in half the long way with his razor-sharp hat simply doesn't get old. Even after 14 years, the finishers still satisfy. If killing people isn't your thing, MK2 was also the first game in the series to have friendships, which are friendly finishers, such as Johnny Cage autographing a photo of himself or Raiden summoning his very own mini-me, Kidd Thunder. Lastly, there are babalities, which are even more ridiculous. Have you ever wanted to turn your opponent into a little baby? MK2 gave you that chance.

While the finishing moves always steal the show with their flashy nature, the core fighting in Mortal Kombat II is also a lot of fun. While some may scoff at the way that every character has nearly identical regular moves, this level playing field puts an emphasis on the various special moves. Sub-Zero now not only has the ability to shoot ice at you, he can also freeze the ground and cause you to slip. Jax's grab-and-pound move is immensely fun to see in action, as are moves like Baraka's blades, Liu Kang's multilevel fireballs, and, well, just about anything Scorpion can do.

For the entry fee of $4.99, you'll gain access to this roughly 250MB download, which offers an accurate version of the original arcade release, right down to its attract mode. You can play two-player games locally, which work just as you'd expect. You can also get online and play against players over the Internet. Like most online games, the quality of your connection, as well as the connections of the other players in the game, will dictate the quality of your match. On a standard, consumer-grade DSL connection, we didn't run into many games that were too choppy to enjoy. In fact, in a couple of cases we ran into matches that actually ran faster than the normal game, which is equally annoying.

The online mode in MK2 is really weird. Rather than set up some sort of custom two-player match that is book ended by menus and scoreboards, hooking up to another player just runs an emulated version of the arcade machine game. But instead of having a second player sitting next to you, that person is someone else in the world. So, if you wanted, you could just not hit start, not join the game, and simply watch a player play single-player. And games don't end until one player disconnects from the match. This aspect of the online play feels rushed and sloppy, especially when you consider that there's no manual or anything to tell you that you need to hit start to play. In these early hours after the game's release, expect to run into a handful of new players who have no idea how to join your game. And because there's no voice chat or other method of in-game messaging, you have no way to tell other players "Hey, hit start!" Most of them figure it out after a minute or so.

The game has an online leaderboard, but it doesn't make much sense. The scoreboard just lists a number, and it's not just a raw count of the number of wins you've scored. After playing for a few hours, we found ourselves with a score of seven points. What the heck does that even mean? The world may never know.

There are also handful of technical glitches and emulation issues. For whatever reason, the fighters don't cast shadows in the Dead Pool background in this version, though they do in the arcade version. When starting a match, the audio seems to cut out for a split second, occasionally making the announcer sound like he's saying "ound" instead of "round." Also, the fatality music cuts off and the game goes nearly silent if you do the first part of Sub-Zero's two-part fatality over and over again. In the arcade version, the music just keeps looping. None of these are absolute game breakers, but they're all disappointing.

Aside from the shadows, this looks like the arcade version of the game. On widescreen monitors, the game screen is surrounded by images of the characters taken from the versus screen, and the game will run in 1080p if you have the proper equipment. The menus, while functional, look and sound terrible. Everything, right down to the font, looks like something that the developers meant to replace at some point but never got around to cleaning up before release. And the sound that plays when you move between menu options is a loud, grating ping. The game audio is usually accurate, but it also sounds muffled and as if it is at a low bit rate in spots. That lines up with the arcade original, but on some home theater systems, the audio only seems to come out of the center channel and subwoofer, which is weak.

It's unfortunate that so many aspects of this emulation seem rushed because this is the sort of classic game that deserves careful treatment. Even something as simple as a four-player round robin network mode (which is available in the other online MK emulation, Ultimate Mortal Kombat 3 for the Xbox 360) would have made a big difference. But at the end of the day, it's faithful enough to the original game, and the online works. If you're an MK fan, that's more than enough reason to spend the five bucks for the game. 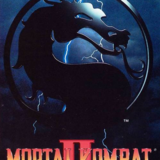