This superb video game adaptation of baseball knocks authenticity and realism out of the park.

There is no room at Cooperstown for baseball games yet, but if the hallowed hall of fame ever adds such a facility, you can guarantee that MLB 09: The Show will be one of the very first inductees. Everything here is brought to life in such an exacting, authentic fashion that you finish games feeling like you've actually spent time out on a real diamond. Driving gappers to the wall, painting corners to ring up Ks, and making running catches on the warning track deliver a sense of satisfaction typically reserved for Little League memories or big-league dreams. This outstanding look at the grand old game is not merely an adaptation of baseball; it is baseball in just about every conceivable way.

Sony's San Diego Studios has done a tremendous job of building on last year's stellar effort, subtly improving most aspects of gameplay while not reinventing the wheel. Granted, this sequel isn't as much of an overhaul as it is a refinement. A fair bit of MLB 09 is a straight rehash of its 2008 predecessor. Modes of play remain fundamentally unchanged from when you left them 12 months ago, including exhibition, franchise, rivalry, online one-off games and leagues (online games are silky smooth, too), and the superb Road to the Show. Nothing here will force you to do so much as glance at the manual, although some extras have been tossed into the mix such as the intense Legend difficulty setting, salary arbitration and the waiver wire in franchise play, and flex scheduling and live drafts in online leagues. Controls also remain pretty much the same, with the addition of a handful of amenities such as the ability to quickly shift fielders on the fly and a more interactive baserunning interface in which you use the analog sticks to steal and retreat.

The look and sound of the game mimics last year's game as well. As with the above, though, nearly everything has been improved in one way or another. Presentation is virtually identical to a Major League TV broadcast, especially with quick game turned off so you can see all of the close-ups and slow-motion camerawork in-between plays. Player detail is amazing. Not only do faces look almost photorealistic, but the detail is also so sharp that you can recognize Major League stars from halfway across the diamond. Animations are superb. Hundreds of batting stances are depicted, and all of the fielding moves could have been taken directly from SportsCenter. Stadiums are packed with fine details. The grass looks so realistic that you might be tempted to mow it, and the infield dirt practically shimmers in the sunlight. Sound effects wrap right around you, with crowd noise and chants placing you on the diamond in the middle of a raucous stadium. The broadcast crew of Rex Hudler, Dave Campbell, and Matt Vasgerian do a good job of keeping you involved in the action, although they are a little too prone to repeating phrases and relying on stock sports cliches. Nevertheless, they provide good information, if not much in the way of cogent analysis.

So you could fairly say that MLB 09 is the same as last year, only better--a lot better. The game on the field now feels almost entirely organic. Although the pitcher-batter duel in 2008 was very good, it now mimics real at-bats so accurately that it is uncanny. Ball physics are simply perfect. The ball comes off of the bat exactly as it should, depending totally on your timing, the location of your swing, and the location and movement of the pitch. When you hit a nubber, you know right away that you deserved to hit a nubber. When you crank one into the upper deck, you know right away that you deserved to crank one into the upper deck. Most at-bats are struggles when you're wielding the lumber. They play out just like in real baseball. You fight off tough pitches by getting a bit of wood on the ball, you can get jammed inside with bat-breaking results, and the pitcher will try to hoodwink you with garbage after getting ahead in the count. Drawing walks is now possible, too. You have to have a great eye and a lot of patience, but at least you can work your way aboard with a free pass now, which generally wasn't possible last year due to the supernatural acumen of the computer-controlled pitchers. Hitting mechanics are so well done that it's best to step into the box with all of the visual helpers switched off. In most baseball games, frills such as the strike box are necessary to get a handle on hitting the ball properly. Here, this graphical junk only interferes with reading pitches and taking cuts.

Pitching is equally brilliant and just as grueling. Every at-bat is a knock-down, drag-out scrap. Opposing hitters are extremely devious and very tough to fool. You can paint corners for Ks, although as in the real Majors, you're better off playing mind games and trying to mess up batters by varying pitch types and speeds. Opposing batters are a little easier to ring up than they were last year, given that their skills at reading pitches back then were so acute that it was just about impossible to get them to chase garbage even when they were behind in the count. Now you can get them to bite more often on pitches a little out of the zone, or freeze them with a heater down the pipe when they are expecting junk. It all adds up to an amazingly lifelike confrontation every time you hit the rubber.

Authenticity is also more pronounced in the field. When balls are hit to players, they now react according to their stats, not according to stock animations. The end result is that you never know what's going to happen. In most sports games, when you see a player going all out, you know that a highlight reel is about to unfold. Here, however, you might see that all-out run end up in a face-plant and the ball bouncing off of a glove. In the dozens and dozens of games that we played, not one play felt canned or preordained. Every single, every home run, every strikeout, every 6-4-3 double play, every routine catch in the outfield was its own wholly unique event. Establishing this random, anything-can-happen vibe is sort of the Holy Grail for sports-game developers, and as such, is rarely realized. Yet here the developers make it seem almost effortless. The visuals back all of this up. Players will bobble balls, pull off one-handed grabs in the infield, and make radically different catches in the outfield depending on the situation. You feel like you never see the same thing twice.

Difficulty is about the only drawback to MLB 09 on the field. Even on the Rookie setting, hitting, pitching, and even some fielding can be tough. Stats generated are nearly dead-on in comparison to the real Majors, so remember that even the best players in the league hit their way aboard an average of a little more than three times in every 10 at-bats. Casual gamers are apt to be very frustrated in the early stages. Until you start getting your timing down and exercising a lot of patience, hitting is extremely hard. You certainly can't pick up the gamepad for the first time and start jacking balls over the fence like you can in MLB 2K9. The same goes for pitching because computer-controlled batters track your efforts and are quick to leap on pitches if you fall into a routine with type and location. Always leading off with that four-seam fastball is a recipe for disaster; your opponents will soon come to look for it and then crush it.

Fielding isn't nearly as hard to handle as either hitting or pitching, although it can be problematic at times. Reading the ball off of the bat is a little tough due to the camera angles. If you go down too low you can't see as much, and if you scale back all the way to allow for a broader view of the diamond, then the ball becomes a BB that you can easily lose sight of against the infield dirt. Another possible issue for some might be the adherence to old-fashioned controls. Whereas most sports games seem to be switching over to handling everything with the analog sticks, MLB 09 continues with tried-and-true button hitting for batting and either a meter or the classic "choose pitch and pick a location" for pitching. This makes the game feel a touch more "gamey" than the equivalent right-stick hitting and right-stick pitching in MLB 2K9, although the results on the field are so much more lifelike than the competition that the trade-off is more than worthwhile.

About the only aspect of MLB 09 that hasn't advanced in a significant way is the Road to the Show role-playing mode. Creating a player and trying to get him to the Major Leagues through controlling him during every plate appearance and fielding chance is every bit as captivating now as it was when it was first introduced two years ago, although it still has a huge problem with load times. It takes a good 20-30 seconds to load up a game for your player, and then another 20-30 seconds at the end of that game to process your results and get back to the main player menu. This sort of wait is readily endurable if you're getting into a game in exhibition or franchise modes, given that you're loading up a full nine-inning contest that generally takes around an hour to play. However, if you choose to play as a batter rather than a pitcher in Road to the Show, you're waiting all this time just to load up a handful of at-bats and a couple of fielding plays. And that's if you're lucky enough to be starting. If you're coming off of the bench, which you almost certainly will be in your first season or two, you often sit through these long loads to fire up a single pinch-hit appearance that wraps up in less than a minute. This gets rather frustrating, and it really bogs down progression through a season if you want to actually play and not simulate your player's actions.

With all of that said, Road to the Show is still amazingly addictive. Sure, it's a time sink. But it feels like you're really building a Major Leaguer one game at a time, earning training points through successes in games and buying skill-enhancing workouts. So it is well worth the commitment. New features such as training in the batting cages, and a revamped baserunning interface that involves reading signs from the third-base coach, further the illusion of being in a player's cleats. Interactive training is probably the best addition because it makes player careers more engaging. Coaches are also responsive to what is happening during games. Have a rough outing against a guy throwing curveballs, for instance, and don't be surprised if you soon get asked to spend some time in the cage with a pitcher throwing nothing but curves. The only complaint about training sessions is that there just aren't enough of them. You seem to get called into one only every couple of weeks, which doesn't give you enough time to focus on improving your skills.

MLB 09: The Show is more of a love letter to baseball than it is just another game. Of course, nothing will ever take the place of the real thing, but anyone with a serious fondness for the national pastime will find this an enthralling substitute. 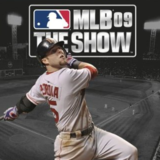