Missile Command is just another piece of proof that remakes are never as good as their originals.

It's getting increasingly difficult to think of a classic game that hasn't been remade and rereleased on a current-day console. Unfortunately, Missile Command is no exception. Regardless of whether you had fun with the trackball-equipped original, you'll be hard pressed to squeeze any enjoyment out of this version.

As with almost every other classic-video-game update, you can either choose the new-and-improved gameplay or a fairly inaccurate version of the original game. Neither version of Missile Command found on this disc is all that impressive. If you choose the classic mode, you'll play a new version of Missile Command that shares only the basic gameplay concept with that of the original arcade game. With updated sound and graphics, the classic mode isn't classic at all. The other mode in the game is the ultimate mode, which follows more of a storyline and gives the game a level, structure, and bosses. In this mode, you're treated to a firing area that is actually larger than your screen. It makes you focus on your radar to determine exactly where the threats are coming from. Once you protect a few cities, you'll move on to a boss level, in which your squad floats in front of a large spinning craft and shoots special targets on it to attempt to destroy it. Although the ultimate mode presents a few new gameplay concepts, Missile Command is still a mindless, repetitive shooter that loses its appeal all too quickly.

The biggest problem that plagues Missile Command is the horrible control. If you're using a Dual Shock controller you can use either the analog stick or the digital pad to target the various incoming missiles, but each control scheme has its own problems. The digital pad is too slow and sluggish to do much good against a barrage of enemies, and the analog control is too jumpy, and it seems to float to various hot spots across the screen. Indeed, this new version of Missile Command will make you miss the trackball the most, and without it, the game just doesn't seem as good.

The graphics in both modes have been completely updated for this new version. The classic mode's graphics leave a lot to be desired, and they almost seem as if they were designed to look bad. The ultimate mode has better, more 3D-friendly graphics, but they still don't look all that great. Effects are decidedly better-looking in the ultimate mode, where your countermissiles look more like ion blasts, and your turrets are actually hovering spacecraft with huge rocket launchers mounted to their backs. The ultimate mode also has a few other nice graphical effects, such as video-like communications between your team members when their missile supply gets low and cool CG cutscenes between missions.

The sound is pretty limited. The same techno beat runs throughout each level, making listening to the soundtrack a lot like listening to a 20-minute club-mix version of a song you don't like. The sound effects are standard shoot-'em-up fare - tons of mediocre explosions and kabooms mixed with the occasional whoosh and tweets of different enemies floating onscreen.

Like virtually all classic games that have been reborn on current consoles, Missile Command not only feels drastically different from the original arcade game, but it also fails to make much of an impression as a game of its own. Unfortunately, the horrible control doesn't save the newest version of Missile Command from its own bland, tired gameplay. In the end, Missile Command is just another piece of proof that remakes are never as good as their originals. 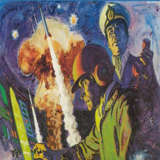