Mirror's Edge offers occasional thrills, provided you can get past some awkward stumbles.

Like its heroine, Faith, Mirror's Edge tries to hurdle some significant obstacles, but unlike Faith, it can't always make the leap. No doubt, this fascinating action platformer possesses its share of innovations, from a first-person perspective to a clean and crisp visual style, yet it looks to the past more than you may initially notice. This is a modern-day iteration of an old-fashioned platformer, in which you're meant to play and replay sequences of jumps, grabs, and slides until you get them perfect, or at least perfect enough to continue. But unlike its ancestors, Mirror's Edge is more about speed and momentum, and when you can connect your moves in a flawless stream of silky movement, it's eminently thrilling and satisfying. Unfortunately, Mirror's Edge has a tendency to trip over its own feet, keeping you slipping and sliding blissfully along, only to have a tedious jumping puzzle or hazy objective put the brakes on. Leaderboard chasers looking to set a speedrun record will find Mirror's Edge to be pure gold. Others will give up, alienated by the inherent trial and error of the game's basic design. At the very least, there's nothing quite like it, and it deserves a cautious look by anyone who appreciates games that hew their own path.

Faith is a runner, in more ways than one. In the oppressed, fictitious society of Mirror's Edge, runners are an underground network of couriers, carrying sensitive information and documents from sender to receiver. The content of these messages is never clear, nor does it matter much; rather, the story's conflict revolves around Faith's sister, a cop who is framed for the murder of a mayoral candidate promising to bring change to the totalitarian government and bring hope to the runners living on the fringe. Soon, Faith is running for a different reason: to uncover the conspiracy at the heart of the murder and clear her sister's name. The story is straightforward, but it's interesting enough to keep you involved, and though it ends with a sequel-hinting cliffhanger, it wraps things up enough to feel fulfilling nonetheless. More intriguingly, the story plays out between missions in stylish animated cutscenes, as well as scenes within the game engine itself, which also look attractive but feature a completely different art style. Both types look good, but the disparity is a little odd.

And so you run--across rooftops, through train stations, and along walls. As you run, you pick up speed and are able to string a number of moves together in rapid succession. You can slide under pipes, bound over railings, and leap across impossible-looking chasms, among other techniques. The most obvious twist in Mirror's Edge, of course, is that you do all of this from a first-person view, rather than with the typical third-person camera we've come to expect. It's an interesting spin, if not wholly new (Montezuma's Return for the PC was blazing this trail in 1998), and it has a way of immersing you as you speed toward your destination. Actions like balancing on a narrow beam, sliding under a ledge at top speed, and tumbling when you land a long jump are fun to execute and look neat, but it may also make you wonder how much fun it would be to see what Faith looks like when she pulls off these neat stunts, which isn't possible in this game.

Nevertheless, Mirror's Edge excels when you hit that snappy stride, and once you've found the best route through a particularly tricky scenario, it's exhilarating to rush through it without a care to weigh you down. But this doesn't happen the first time, or even the fifth time, you do it. You will need to experiment and hone your skills, because a simple mistake can send you plunging down onto the street below, or will at very least interrupt your stride. You're expected to play each level multiple times to learn the routes that best propel you along, which is great the 10th time around but is often an infuriating series of false starts, mistimed jumps, and full stops the first few attempts. If you need a hand, you can hold a button to activate runner vision, which turns the camera toward your destination, but it's an imprecise solution that sometimes points you toward a short-term objective and other times points you toward your long-term goal.

Another inconsistently helpful tool comes directly from the game's impressive art design. Mirror's Edge is a game of visual contrasts, in which stark white environments contrast with vivid colors. It looks beautiful and clean, and it's a great way of demonstrating both the bleakness of an authoritarian society and the unique manner in which a runner would see the world--as an array of landing points and jumping opportunities. Important ramps, doorways, ladders, and other points of interest are painted in a vibrant red, which is an important visual cue in some of the broader levels. However, this element too is delivered inconsistently; in some cases, the red hue may not fade in until you are close to the pole or vaulting point in question, and in other cases, Mirror's Edge expects you to figure things out without this visual assistance.

For a game that relies on so much forward momentum, Mirror's Edge has a way of bringing the pace to a halt. Sometimes this is because of the nature of trial-and-error gameplay: fall, die, reload checkpoint. At other times, it's because you're faced with an intricate jumping puzzle that eschews the sense of speed entirely, such as one that has you descending into the depths of the water supply system and then up again. These aren't bad, but they're not particularly engaging either; you're more likely to feel relieved when you reach your destination, rather than fulfilled. Or you'll be zooming along, only to find yourself in an elevator, reading the news crawl on the wall's electronic panel while the level apparently loads in the background. In all of these cases, you're torn from the experience and reminded that this is, after all, just a game.

Armed enemies further complicate matters. It's best to run right past them when possible, but their bullets have a way of bringing you to your knees as you rush around looking for the best escape route. Some foe-heavy scenarios are particularly annoying, such as a sniper-loaded sequence in the final level. You can confront the threat head-on in some cases, but it requires careful planning and excellent timing. You can perform some close-combat moves like jumpkicks and punches, but these are best when used as hit-and-run tactics; trying to engage in melees with more than one or two enemies at a time is a quick path to the most recent checkpoint. Conversely, you can disarm an enemy with a quick-time event, pressing the disarm button when your foe's weapon flashes red. If you want to hold on to it, you can fire off a few shots until the clip runs out. Faith is ultravulnerable to gunfire, however, and the gunplay is loose and unfulfilling. If you have trouble keeping things in check (it takes some split-second timing to land a pitch-perfect disarm), you can enter a limited-use slow-motion mode, which comes in handy and makes some of these action-focused moves look cool but ultimately doesn't add much to the gameplay.

If you can overlook the array of quirks long enough to find your stride, you'll want to check out the beat-your-record races and level speedruns. Both modes feature online leaderboards, and both cater to the players most likely to get the most out of Mirror's Edge. In a sense, the single-player story is simply a practice run for being a virtual show-off, yet the players repeating these levels, because they'll learn them to perfection, are also the ones likely to see Mirror's Edge at its most thrilling. But even casual players will take to the unusual controls, though the trigger-centric jumping and crouching may take some getting used to. For what it's worth, the PlayStation 3's Sixaxis and Dual Shock 3 controllers offer a slightly more comfortable experience in this regard; the clicky shoulder buttons on the Xbox 360 pad are fine but are a little less enjoyable to use.

While the visuals deserve kudos for their unusually crisp style, the audio deserves its own high praise. Sound effects like Faith's breathy heaves and plodding footsteps are authentic touches that heighten the sense of speed and tension. The voice acting is equally terrific, but it's the pulsing, driving soundtrack that impresses most. Its rhythmic flow augments Faith's most fluid runs, while subtle notes fill in the silence during downtimes. The superb musical journey culminates in a fantastic vocal track that plays during the game's final credits.

Mirror's Edge is many things: invigorating, infuriating, fulfilling, and confusing. It isn't for everybody, and it stumbles often for a game that holds velocity in such high esteem. But even with all its foibles and frustrations, it makes some impressive leaps; it just doesn't nail the landing. 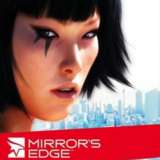