Imagine a game with a huge, open world filled with dozens of unique vehicles and attacks that let you cause destruction whenever and wherever you choose. Now, toss in game-crippling bugs, brain-dead AI, unsatisfying gunplay, a lousy story, and repetitive missions. That's Mercenaries 2: World in Flames. Mindlessly causing chaos can be enjoyable in short bursts, and online co-op play spices things up a bit, but beyond those all-too infrequent bits of fun, Mercenaries 2 is a dud.

You play as one of three mercenaries--all of whom have very similar storylines. The game follows your absurd quest for vengeance on a man who hired you to do a job and didn't pay. Mercs 2's story is bad (as is the voice acting), but it's ultimately inconsequential and all of the cutscenes can safely be skipped. The first few missions are designed to get you accustomed to the game's third-person-shooting action. In the span of 30 minutes you'll shoot several different weapons, use grenades and C4, and drive cars, boats, and jeeps as you secure what will eventually become your home base. After that, the first few contracts you take on are fun, but that's mostly because the gameplay mechanics are new and the thrill of destruction is still fresh.

It's after the first hour or so that you'll start to notice something's amiss. For a game that's all about guns, actually firing one isn't terribly satisfying. Weapons feel weak, it's difficult to hit moving targets, and the damage they cause is inconsistent. In fact, it's easier to hijack a tank or grapple onto a flying helicopter than it is to destroy one. Heavier weapons such as rocket-propelled grenades are great and can destroy almost anything they hit, but the amount of ammunition (which, for some reason, you have to hit a button to pick up) is so limited that you won't be able to use them often. Plus, it's tedious to have to go in a shop, purchase a weapon, go outside, call for the weapon, and then wait to pick it up. Why can't you just walk into a store and buy a gun?

The game's version of Venezuela is enormous, but while technically impressive, its size is mostly a detriment. There's not a whole lot to do, so you'll be tempted to make your own fun by blowing up buildings and cars and terrorizing towns in a tank. While this might be enticing (and fun for a few hours), it's a bad idea if you're trying to actually make it to the end of the game. Not only are you penalized for harming civilians, but one stray bullet can anger an entire faction. Factions are your main source of income and can be essential to mission progress, but when a faction is angry with you they'll quit offering you work and shoot you on sight. The large world also means that unless you're in a position to use the instant transport option, it takes forever to get from one place to the next. Roads wind aimlessly around the terrain; the GPS often gives bad directions; random friendly soldiers will blow up your cars; and helicopters are frequently shot out of the sky by missiles that rarely miss. To make matters worse, when you're killed after hitting a checkpoint you typically have to go back to your home base or the outpost where you got the mission and then travel all the way back to your target.

You'll eventually acquire the services of a mechanic, a helicopter pilot, and a jet pilot. The helicopter pilot is useful; he'll drop off supplies and transport you where you need to go as well as pick up the money and fuel needed for airstrikes. The jet pilot, who is a stereotypical drunk Russian, drops bombs whenever you call in an airstrike. It's too bad that airstrikes are of limited value, because you often can't get close enough or avoid being shot long enough to line up the target. There always seems to be something you're supposed to protect or something stopping you from transmitting--it's just easier to go in and shoot everyone. The mechanic is just plain worthless. She's supposed to use junk that you find hidden in boxes throughout the world, but unless you actively search for them, you're not likely to find many, and she won't provide anything more than the car she had when you teamed up with her.

Mercenaries 2 purports to give you all sorts of freedom when it comes to how you exact your revenge, but in reality, your choices are few. Yes, there are different factions and groups spread out across the map, but typically only one of them has a contract that will help advance the storyline, and you can get nearly to the end of the game before having to pick one side over another. Most of the contracts require you to take over an outpost for a faction, and when the game does give you the chance to do something else it's limited to annoying escort missions or out-of-place racing challenges. Each faction has a set of high value targets (HVT). You can earn cash by capturing or killing and then photographing these targets. This is interesting the first few times, but the money you make for bagging someone isn't worth the hassle. Factions get mad when you take out their people, and friendly soldiers will often kill the guy you're trying to extract alive. Capturing outposts is extremely repetitive. While the size and shape of the bases may vary slightly, the way you attack them is the same: Kill everyone inside and call in a landing crew. This can be mildly amusing for a short time, but the fun quickly grinds to a halt as the game's bevy of bugs and problems make themselves apparent. Enemy AI is horrific. If you're injured you can just run behind a building to regenerate--soldiers won't make much of an effort to find you. They won't even go to great lengths to shoot you if you're right next to them, often standing there oblivious to your shooting them. When you have to destroy a specific piece of equipment or vehicle, sometimes the easiest thing to do is stand next to or get inside of it and let the bad guys blow up the very thing they're supposed to be protecting.

The problems just keep on coming. Helicopters will vanish with you in them; turrets will float in midair; people you're supposed to rescue will drown themselves or run face-first into the helicopter rather than get in; and allies will shoot at you for no reason. Combat falls flat because shooting guys takes longer and is more difficult than simply running up to them and killing them with one punch; helicopters will often drop off support troops on rooftops, where they'll either get stuck or plunge to their deaths. Enemy soldiers respawn in gun towers even after you've taken over an outpost; they can shoot through walls and often appear out of thin air, too. Civilians will run right in front of you when you drive, costing you 5 grand each time you hit them; your helicopter pilot will sometimes fail to show up, or will drop your cargo where you can't get to it. You might even be unlucky enough to have the game crash during a load screen; or to be told that you're dead when you clearly have health left, forcing you to restart. You might even lose progress due to a save game failing. The list of bugs and problems really is staggering.

Really, the only fun to be had with Mercenaries 2 is in playing cooperatively with a friend online. You can chat back and forth during long helicopter flights, revive the other person when they're killed by an unseen foe, and put your heads together to creatively tackle obstacles. But even co-op has caveats. If either person gets killed, he or she has to be revived before the timer runs out or else the game will end--a problem when the other person is far away or in the middle of a long hijacking animation. Your buddies can also cause you a lot of grief if they anger factions or kill civilians, leaving you with a big mess to clean up. There are even more bugs than usual when playing online, which is no small feat given the problems evident during the single-player campaign. And lastly, co-op play makes the game (which, cheap deaths aside, is pretty easy) even easier.

Mercenaries 2's visuals are inconsistent. The Xbox 360 and PlayStation 3 versions of the game are mostly similar, but the PS3 has some ugly aliasing problems. The vehicles look good, and there are a lot of them. Some areas are very attractive, and the varied terrain (cliffs, rivers, rolling hills) enhances the gameplay and will change the way you attack a target. The game's bread and butter--its explosions--are generally disappointing. Some of them look fantastic, but it's jarring how one animation transitions to the next when something blows up. There aren't many different buildings to destroy, either, so you end up seeing the same explosions and over again. While you can typically see far off in the distance, what you see isn't very detailed. This isn't a huge problem when you're standing still or on the ground, but when you're in a moving helicopter, the draw-in is obvious to the point of distraction. Clipping, hideously blurry backgrounds in cutscenes, repetitive buildings, enemies that all look alike (right down to the same terrible animation when they get shot), and a drab color palette round out the package.

Mercenaries 2 is filled with bugs and glitches that are unacceptable in a retail release. Even if it were possible to overlook the broken elements, you're still left with abysmal AI, repetitive mission structure, unsatisfying weapons, and a huge world without much to do. Mindless, random destruction provides some thrills, but there are so many better open-world action games out there (including the original Mercenaries for the PlayStation 2 and Xbox) that there's no reason to spend your time and money on this clearly unfinished game.

View Comments (31)
Back To Top
5
Mediocre
About GameSpot Reviews 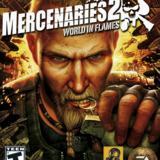 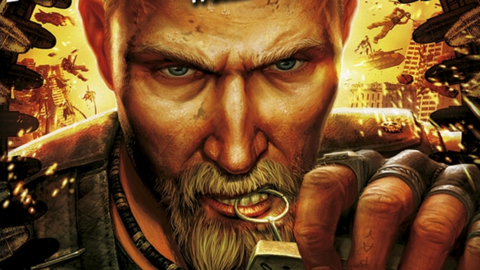 Built from the ground up, this next-gen sequel to Mercenaries features a host of new features, vehicles, and weapons.

Teen
Language, Use of Alcohol and Tobacco, Violence