All in all, it's a welcome surprise.

Sony's MediEvil takes place in a fictional Gallowmere, relaying the legend of a one Sir Daniel Fortesque. At one time, Sir Dan was Gallowmere's most esteemed knight, until he died fending off the evil sorcerer Zarok's battalion. As the fable goes, Sir Dan's demise wasn't of the heroic proportions of, say, William Wallace, but the king put on the big spin (for national security) and documented history as such. Well, Zarok didn't die back then, and now his magic brings Dan back accidentally, and incidentally, around the time that Zarok feels his new army of evil dead and plug-uglies is prepared to go at it once again. So, as Sir Dan, you're given a second chance to save the land, if you can live up to your own weighty reputation.

The game may appear like something of a 3D version of Ghosts 'n' Goblins (with touches of Tim Burton's film, The Nightmare Before Christmas); however, the gameplay is very different. There are similarities to Capcom's title, since you must wade through a horde of creatures using an arsenal of found or earned weapons (such as a magic sword, a bow that shoots flaming arrows, and a throwing ax), but there's more at work than just hacking and slashing. Each level has unique puzzles that differ from stage to stage, giving a nice degree of variety to the title. Also, once a certain number of enemies is dispatched, you can gather up a chalice that gives you access to the Hall of Heroes, a place where heroic ghosts dole out special weapons or items with each visit, usually accompanied by a verbal dressing down at your unworthy status as the champion of a Gallowmere.

While MediEvil may have an original look, its visuals aren't perfect. Pop-up occurs from time to time, there's a rare bit of bad collision detection, and the camera can be a bit wonky also. You can shift the perspective left and right by using the L2 and R2 buttons, but when you start moving again, the intelligent camera can sometimes get ideas of its own and shift back the way it was. Luckily, this only occurs in the levels that contain wider open areas, and not in the later levels that see the character walking across thin bridges, where tight camera control is an absolute necessity. Still, a single button control enabling a follow-cam (as seen in Rare's Banjo-Kazooie) would be welcome.

The real stars of MediEvil though are its variety, story, and difficulty level. As mentioned before, the diversity found from level to level adds a lot to the game, as does the wide and varied arsenal of weapons. The storyline is also strangely engrossing - as Sir Dan gets farther and farther in, he slowly begins to gain the respect of the other characters in the game, which you, as the player, surprisingly start to take actual pride in. And while the title starts off pretty simple, it soon attains a level of difficulty that is "just hard enough." That is, it's "just hard enough" to be challenging but not difficult to the point of frustration. It also really does a good job of making you comprehend play mechanics without being too overt (like spelling them out in the form of signs and whatnot). For example, you'll be put in a situation where you have to figure out something new before you can leave the area you're in. Then, once freed, you realize you can apply it everywhere you've been earlier in the level to get items that were previously out of reach.

MediEvil may not be as graphically appealing or as accurate in camera controls as a Spyro the Dragon, but to keep that analogy going, it provides the level of diversity, challenge, and fun that that title may have somewhat lacked. All in all, it's a welcome surprise. 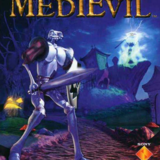