If not for the garish visuals, Medal of Honor: Underground would be the kind of game you'd want in your collection.

The Medal of Honor franchise has a rich pedigree on the Sony PlayStation and PlayStation 2 consoles. Medal of Honor: Underground was the second game in the series, but it is the first to be released for the Game Boy Advance. The story takes place during World War II and drops you into the role of Manon Batiste, a female member of the French resistance. The game itself is a first-person shooter, similar to Doom or Wolfenstein 3D, where you complete missions by killing enemy soldiers and retrieving important documents. Unfortunately, while the overall design is stellar, the graphics are so poor that they diminish all aspects of the game.

You can't see where you're going or what you're shooting at. The texture-mapped surfaces that make up the environments are blocky and have a habit of blending together, partly from a lack of color diversity and partly because the scenery often bends and warps as you move around. Since the scenery is heavily pixilated and full of visual noise, it's difficult to see enemy soldiers before they're on top of you. It doesn't help matters any that the character models are relatively small. The last major complaint about the visuals is the game's sluggish frame rate. If you have enemies behind you, it is impossible to turn and attack them before they've fired at least two or three times. The choppiness of the animation along with the warping scenery also may frequently induce feelings of motion sickness.

It's a shame that the topsy-turvy graphics make Medal of Honor: Underground so difficult to play, because it otherwise has so much going for it. Each of the eight missions is split into three or four acts. The orders you receive before each mission offer hints as to how to complete your objectives as well as an authentic recounting of the war and the many atrocities committed by the Third Reich. Not all of the objectives involve mindless killing, which is a refreshing change from most first-person shooters. A fair number of objectives involve escorting resistance members or stealing military secrets. On many occasions, you have access to a camera that allows you to pose as a propaganda journalist. If a soldier becomes suspicious, you can snap a photograph to get him off your back. In some areas, there are far too many soldiers to risk a shoot-out, so the camera allows you to seek cover and mount an attack in relative safety. The different goals within each mission really help keep the game fresh.

Other good aspects include the game's soundtrack, which is similar to that of the original PlayStation version and about as symphonic as you'll ever hear on the GBA; the ranking system, where you can unlock awards and a full-length bonus mission; and the two-player link mode, where you and a friend can fight against one another in five different multiplayer maps. The multiplayer maps are excellent. They're large and full of cover, but not to the extent that players can hide indefinitely. The weapon locations are pretty shrewd as well, since they're often located adjacent to ambush spots.

Fans of the original PlayStation version of the game will notice a few regrettable changes in the Game Boy Advance port. The most obvious is the total removal of video clips and audio commentary, although the pre-mission photographs and the audible voices of the German guards do lend an ample sense of authenticity. Practically speaking, the most significant difference is the inability to aim upward or downward in the GBA version. Headshots and accuracy were major factors in the PlayStation version of the game, but here you'll have to settle for an automatic lock-on cursor that appears whenever you run your crosshair over an enemy. Your weapons are also more accurate from a distance, which flies in the face of logic but entices you to sneak around more often. Another change involves the behavior of enemy guards. They're pretty smart and will still try to outflank you or dodge your shots, but they no longer bother to return live grenades. Even though that wasn't a major aspect of the PlayStation version, it was a nice touch and a nerve-wracking surprise the first few times you experienced it.

If not for the garish visuals, Medal of Honor: Underground would be the kind of game you'd want in your collection. The design is superb and the historical authenticity is immensely charming. Nevertheless, the graphics are bad, and they definitely kick the game down a couple of pegs. 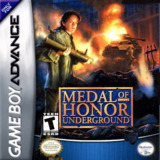 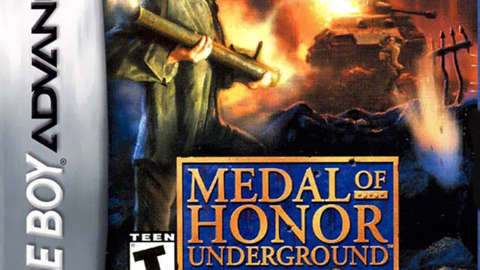 Medal of Honor: Underground is one of the better first-person shooters available on a console, and as such, fans of that genre and history buffs alike owe it to themselves to give it a shot.