The weakness of Rising Sun's gameplay undermines what could have been a much more enjoyable experience.

These days, Electronic Arts must expect the Medal of Honor games to sell solely on the strength of their name alone. The newest game in the acclaimed World War II-themed series of shooters, subtitled Rising Sun, adopts the same formula used by its predecessors, but it's fraught with lots of minor gameplay problems that eventually add up to one major headache. Rising Sun isn't completely without merit, since it comes packaged with some nice extra materials and mostly solid production values, but the weakness of the gameplay itself undermines what could have been a much more enjoyable experience.

If you've kept up with the Medal of Honor games over the years, or even the legion of World War II games in general, you'll notice right away that Medal of Honor Rising Sun represents a noticeable shift in setting. For whatever reason, nearly all WWII games focus on the various European operations that took place during the grueling years of the war, but Rising Sun steps up to the plate and moves the action entirely to the Pacific theater of operations. The game's missions will take you to various hotspots in the Pacific conflict, such as Manila, Guadalcanal, and Singapore, and, in true Medal of Honor style, you'll be tasked with accomplishing big objectives with a small force (sometimes limited only to yourself). Rising Sun isn't the longest game, with only around eight missions that usually last 30 minutes to an hour each, but there's at least a decent amount of variety in its locales.

The Medal of Honor games have always been about presenting dramatic, larger-than-life action sequences that make you feel like you're really in a war--or at least a war movie--and Rising Sun does a respectable enough job in this regard. The game starts off pretty strongly by thrusting you right into the middle of the Pearl Harbor surprise attack, which will have you trying to escape the innards of your besieged ship. You then man the guns on deck and later do the same on a PT boat against waves of incoming Zeroes. Though this sequence is, at its core, a basic rail shooter, at least it's exciting. After Pearl Harbor, Rising Sun reverts to the tried-and-true FPS gameplay that the Medal of Honor series is known for. You've got the standard WWII-era armament at your disposal, including the M1 Garand rifle, Thompson submachine gun, and M1911 pistol. FPS fans should honestly be pretty familiar with the weapons in the game, so there are no big surprises here. Your objectives always place you behind enemy lines and usually call for you to complete such tasks as disabling artillery, infiltrating a secret meeting of Axis leaders, and even sinking a Japanese carrier. Of course, you'll have to kill every enemy soldier in your path to complete these goals.

All of the important pieces of the Medal of Honor formula are present in Rising Sun, so you may be wondering what's wrong with the game. The answer is, it just doesn't work right. The basic mechanical elements feel extremely clumsy and unfinished, at times, which often makes playing through the missions feel more like a chore than a good time. The most egregious offenders are the enemy and teammate AI and the location-specific damage system that governs enemy deaths based on where they're shot. During our time with the game we observed such absurdities as enemy soldiers who ran in place up against walls and enemies who stood motionless and faced the other direction while we noisily dispatched of their comrades only a few feet away. Some enemies will attack you viciously, but others will simply stand there waiting for you to reload your weapon so you can shoot them in the head. Then again, headshots aren't nearly as lethal in Rising Sun as basic anatomy would dictate. You can often squeeze off what looks like a solid shot to the head or chest with your rifle, only to have the enemy stagger briefly and then continue firing as normal. It can take two or three subsequent shots to put him down for good, which doesn't do a lot for the game's attempts at realism. Similarly, a shotgun blast to the legs will sometimes cause an enemy to hop about comically for a moment, and then he'll charge at you at a full sprint. There are a few other rough edges lurking about, such as occasionally shoddy collision detection that makes enemy soldiers clip through floors. All of these little problems just make the game feel a little sloppy. Things like functional AI and solid hit mechanics are essential to the fun of a first-person shooter experience, and that's precisely where Rising Sun fails.

There's a fair amount of extra value to be had in Rising Sun, if you can trudge through the main campaign. Subsequent plays will let you access some new areas of the levels via a few hidden items that you'll only pick up toward the end of the game--the first time around. Furthermore, the game features a no-frills two-player cooperative mode that lets you play through the game in split-screen fashion with a friend (whose character model will look exactly like yours). Finally, a basic four-player competitive mode is available with a handful of maps and a pretty big assortment of weapons. The deathmatch is a nice gesture, but it lacks the extensive gameplay options found in other recent shooters. You'll find online multiplayer in the PlayStation 2 version, though it's limited to the same game modes, maps, and weapons as the offline four-player mode. Again, the online stuff is a nice gesture, but unless you're an online deathmatch junkie, this mode isn't enough to really recommend the PS2 game above the others. Finally, the game includes a fair amount of supplemental video content that creates a nice historical backdrop for the action. Between missions you'll see old black-and-white footage of the war, accompanied by a decent narrator, and these segments help to fill you in on the state of the war during the time you're currently playing. You can also unlock video interviews with actual veterans of World War II, which should prove interesting to those with an interest in the subject matter.

Graphically, Rising Sun fails to live up to the standard of its predecessors. The weapon and character models look pretty detailed, but the levels are often extremely basic in both artistic and technical aspects. They lack the sheer amount of geometry that other recent FPS games have used to establish greater detail, and the textures aren't nearly as detailed as they could be. Some of the game's levels do have a unique and appealing character, such as the nighttime slink through Singapore, but you'll also get tired of traipsing through the same-looking jungle pathways that lack detail and variety. The three versions of the game stack up against each other pretty much as you'd expect. You'll get the cleanest image quality and highest frame rate on the Xbox, with the GameCube coming in second and the PS2 bringing up the rear. However, the visual quality and frame rate differences really aren't that dramatic between the three, so you won't get a significantly different experience playing one versus the others. In true Medal of Honor fashion, Rising Sun's sound fares better than its visuals. The score is extremely dramatic and sounds like something lifted out of a recent World War II combat epic. The sound design is passable, with pretty solid explosions and some ambient noise, although some of the gunfire could have used a little more punch. Finally, the voice acting is usually pretty good, with no noticeably hokey faked accents coming from your international colleagues. You'll even hear a good amount of spoken Japanese when you sneak up on your enemies, which adds a little to the game's authenticity.

What's really a shame about Medal of Honor Rising Sun is that a few more months of development could have polished it into a game truly worthy of previous entries in the series. The basic framework of a Medal of Honor game is evident here, but Rising Sun's fundamental components just aren't as well-oiled as those of its predecessors. Most of the less-essential parts of the game, such as the rousing score and informative supplemental materials, are consistent with the high quality we've come to expect from the Medal of Honor name. Sadly, that contrast makes the failures of the core gameplay that much more disappointing. Diehard fans may be able to overlook the mechanical flaws in order to appreciate the game's refreshing change of venue and rich historical context, but taken purely as a shooter, Medal of Honor Rising Sun is simply not where it should be.

View Comments (1)
Back To Top
6.4
Fair
About GameSpot Reviews 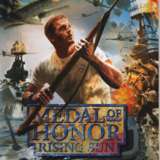