Although the Game Boy Advance is nowhere near as powerful as a PC, Mech Platoon compromises nothing compared with stalwart veterans like Starcraft or Command & Conquer.

Mech Platoon is a real-time strategy war simulation that places major emphasis on resource management. You assume the role of an army commander for one of three warring nations. The goal is to mine minerals, build up your army, construct bases, and overrun the enemy. In short, Mech Platoon is a strategy buff's dream. Surprisingly, although the Game Boy Advance is nowhere near as powerful as a PC, Mech Platoon compromises nothing compared with stalwart veterans like Starcraft or Command & Conquer.

The core of Mech Platoon is resource management--mining more minerals than your opponent to create greater numbers of friendly units and to upgrade them faster. There are three basic elements to mine: sand, rock, and crystal. Varying amounts are required to deploy units, build bases, or repair inventory. Builders require a scant 50 units of sand, while large robot tanks and bases can require hundreds of units of rock, crystal, or both. If you want to erect a shield around your base or learn how to recycle enemy debris, that will cost you as well. While there is always a danger of running out of resources, Mech Platoon provides a basic system for converting lesser minerals into the more valuable alternative.

In terms of unit variety and game balance, Mech Platoon also excels. Although there is a painful 30-unit-per-stage maximum, there is plenty of room to dominate. There are roughly 20 stock mechs to unlock over time, but many custom variations can be earned by combining various arm, torso, and leg implements. Blades, cannons, and shovels are but a few of the arm alterations, while heavy armor and wheel tracks can augment your robot's body and legs. Each robot has differing attack, armor, movement, and hit point characteristics. There are short-, mid-, and long-range attacks performed hand-to-hand with beam weapons or via missiles. Using the GBA's face buttons, it's possible to select a single unit or click and drag to highlight multiple units. If need be, you can give attack, protection, repair, or mining commands to entire squads or merge similar units together to form stronger teams.

Graphically, Mech Platoon isn't as stylish as Nintendo's Advance Wars, but it is on par with PC-based strategy sims from a few years ago. A full-motion video, computer-rendered introduction brings you quickly up to speed on the plot, while an initial training mode teaches you the ins and outs on generic terrain with a smattering of basic units. Once you delve into the various single-player campaigns, terrain and unit types increase in complexity. Desert, forest, and aquatic planets lend ground for hulking mechs with names such as Babel, Ronwe, and Zaren. There is some slowdown during larger skirmishes, but considering the amount of weaponry, track, and debris animation, it's a minor trade-off.

The same can't be said for the game's audio, which is composed of mostly ear-wrenching midi music with a smattering of crisp digitized sound effects. You can disable the music, though, and the sound effects by themselves do break up the monotony somewhat.

Mech Platoon won't do much to induct you into the RTS genre if you're not already a fan. However, there is a lot of variety to explore. In all, there are more than 50 single-player stages spread across three lengthy campaigns, plus a four-player versus mode. Thanks to the multitude of hidden parts, enemy components, and a few secret bonuses, there are also more than 100 different mech combinations to discover.

A high-quality real-time strategy on the Game Boy Advance--that's Mech Platoon in a nutshell. 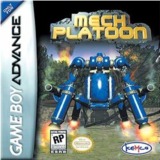 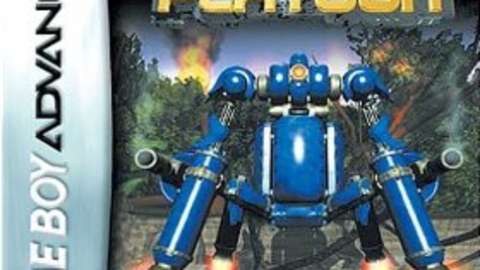 Although the Game Boy Advance is nowhere near as powerful as a PC, Mech Platoon compromises nothing compared with stalwart veterans like Starcraft or Command & Conquer.