Most of the ingredients for a good action game are present in Meat Puppet, but they've been thrown together in such a hurry that the end result is just short of unplayable. Those familiar with Origin's games will immediately recognize Meat Puppet as a very derivative product: an isometric, futuristic, fast-action shooter. In this case, you control a lanky, foul-mouthed heroine around a bleak-looking futuristic cityscape, firing nervously at anything that moves. While such a setting needn't necessarily make for a bad game, Meat Puppet's execution leaves boundless room for improvement.

You play the role of said long-legged gunslinger, Lotos. She's been kidnapped and forced to do some dirty work involving the assassination of several haughty city ambassadors. Her cyberpunk sidekick Dumaine offers e-mail advice along the way, sometimes transmitting a pop-up message right in the middle of some key action sequence. The neo-gothic scenery looks pretty sometimes, but Lotos won't be able to admire it for long because an invisible timer is ticking away for each mission. There's nothing quite like wrestling irritating controls while worrying about the clock.

You control Lotos by pointing the mouse where you want to go and holding the right button. You'll want to run the whole time (remember that timer?), so you can dedicate one hand to holding down the CTRL key. You shoot a weapon by pointing and clicking. It worked for , but in Meat Puppet, if that mouse isn't right on top of the bad guy, you'll miss the shot. There is no concept of line of fire, so if the mouse is just beyond the enemy then you're wasting your time and ammo. And since enemies stumble about unpredictably, you'll be grinding your teeth trying to gun them down. Lotos' fancy futuristic machine gun is so stylish that it's not even automatic; you need to click like a madman just to get the job done. Her other weapons, including a rocket launcher and a flamethrower, are equally exciting. And just watch what happens should the enemy step behind some foreground object like a pillar. Even if he's in Lotos' plain sight, she won't be able to shoot him since the mouse pointer will be on the pillar and not the enemy. Similar inconsistencies plague Lotos' walking and jumping abilities.

Chances are some bad guy's always blasting away with some astonishing firearm. As Lotos' health saps to nothing, she deadpans "Great," and better still, she shrugs. Can't say she doesn't keep cool under fire. If you guessed by now that Meat Puppet boasts a thumping techno soundtrack, you're absolutely right. But you cannot have realized just how grating the sound effects in Meat Puppet really are - the enemies' verbal repertoires consist of one to two sound bytes that all mash together in the heat of battle, thus changing your benign computer speakers into mind-numbing torture devices.

From the moment Lotos announces her first four-letter word in the game's boring introduction, it's clear that Meat Puppet's attitude is all talk and no real action. When you shoot one of the little cleaver-wielding children and he erupts into blood and gore, the results aren't grisly so much as they are comical - he turns into a little pile of what looks like strawberry jam. Though Lotos herself is animated nicely, most everyone else in Meat Puppet looks mediocre.

Unpredictable enemy AI, mouse-driven control, and nonlinear level design seem like good areas to focus on in constructing an action game. Kronos tried to do all these things, and failed at each in turn. Meat Puppet looks awkward, sounds bad, and plays worse, leaving the game player feeling frustrated and exhausted. 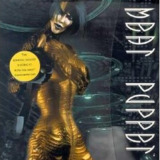