Maximo vs. Army of Zin Review

It's not for the faint of heart, but if you're looking for complex and rewarding action-platforming, Maximo vs. Army of Zin really satisfies.

The sadists who brought you 2001's Maximo: Ghosts to Glory are back for another hellish go with a new sequel, Maximo vs. Army of Zin. These games are noteworthy for two reasons. First, they're successors in spirit to the venerable Ghosts 'n Goblins platformers of yore, and second (following the first point), they're hard as all hell. Like its predecessor, Maximo vs. Army of Zin eschews modern gaming conveniences, like ample save points and unlimited lives, opting instead to make you sweat it out with only a handful of lives and lots of enemies and pitfalls to overcome. If you can grit your teeth and get past the daunting frustration factor, you'll find in Army of Zin a surprisingly deep and involved hack-and-slash platformer with a quirky, endearing style and a lot of heart.

The story picks up some time after the end of the first game, with Maximo and his pal Grim (y'know, the grim reaper) searching the wilds for Maximo's lost and presumed-dead love Sophia. After coming to the aid of a village under attack by ghastly, shuffling automatons, Maximo realizes that the Army of Zin, a mythical legion of soul-powered robots, is again on the loose, though it was imprisoned in a vault 500 years earlier by the Baron of Hawkmoor. So Maximo, the hero that he is, sets out to protect the land from this new menace and to find out just how the heck the robots escaped their tomb in the first place. The story evolves through real-time cutscenes--and the occasional prerendered movie--throughout the game's five major areas. The story's actually compelling enough to keep you going, so even if the game wasn't any fun, the story would still likely keep you involved.

Fortunately, the game is fun. If you played the original Maximo: Ghosts to Glory, then Army of Zin will look pretty similar to you on the surface. Don't be fooled, though, because Capcom has made a startling number of fixes and upgrades under the hood. The fundamental mechanics are, of course, still the same. You still run through a level, double-jump over obstacles, and swing your sword at every malevolent being that crosses your path. Now, however, there's a lot more meat to controlling Maximo's heroics because this time you can purchase a number of upgrades from wandering merchants for your sword, shield, and even boxer shorts. You'll also pick up a massive combat hammer early on, and then later you'll receive elemental replacements for both this hammer and your trusty sword. The weapon upgrades give you new melee powers, like a spin attack or a dashing stab, which makes it easier to get out of tight spots in combat. Your shield powers give you the ability to actually throw the shield, or you can use it to suck up treasure. Finally, the various pairs of underwear help you to gain additional armor or attack power, among other things. (Interestingly, they may even help you find hidden treasure chests.)

The more you play Army of Zin, the more you'll discover how rewarding and just plain entertaining the combat can be. Maximo can execute a basic horizontal and overhead attack with his weapon, and these can be combined in different ways to produce some really long combo strings. In fact, the game even adds a combo counter to keep track of your hits, and the more you can get in one combo, the more treasure you'll be rewarded with when the enemies are defeated. It's good that Maximo is such a capable fighter this time around, since he deals with a truly awful number of evil robots and other enemies. Once you get a handle on the combat, it's pretty exhilarating to go buck wild with your sword combos to clear an entire room's worth of the clockwork bastards in just a few seconds.

In terms of volume, Maximo vs. Army of Zin isn't the longest game. However, that doesn't take into account the many inevitable times you'll have to retry a given level until you make it through, so the game will definitely take you a while to finish. As mentioned, the game's levels are split into five distinct areas, each with a rampaging boss at the end. Each level is really pretty long, and they're all densely packed with enemies, obstacles, and nicely varied scenery. You're rated at the end of each level based on how many enemies you killed, how many villagers you saved, and how many secrets you found. Once you've done it all, the level is stamped with a "mastered" seal. The more levels you master, the more trinkets you can unlock from an in-game art gallery. Finishing the game will take you a decent amount of time, unless you have machinelike precision. However, the sheer fun of the gameplay and the unlockables should keep you coming back for a while afterward.

If all this talk of white-knuckled difficulty makes you squeamish, or skeptical, perhaps an explanation is in order. What makes Maximo vs. Army of Zin so hard is the way the game handles your lives and saving your progress. You start out with three lives at the beginning of the game, and that's it. There are no continues. There's no nothin'. You can gain extra lives by collecting lots of souls from enemies (which is time-consuming) or by buying them from merchants (which is expensive). Basically, though, you'll have to be very, very careful, and you'll have to prevent yourself from dying too often if you want to make it to the end. The game is just punishing in a lot of its little gameplay touches. For instance, you never, ever get your health and armor restored between levels. So if you're down to your underwear and only a sliver of life left when you finish a level and move on to the boss, too bad--that's how you're fighting him. As another example, if you collect important items (like extra armor) in one area and then die, when you respawn at a checkpoint and go through the area again, these items will be gone. Pretty hardcore. If you like your action games unforgiving, this is about as hard as it gets these days.

Army of Zin's presentation is a little mixed, but its endearing humor and style shine through the occasional murk. The graphics are improved over the previous game but are still not quite on par with the very best the PlayStation 2 has to offer. The character models are reasonably detailed, and they animate quite expressively. Additionally, the environments are diverse but could use a little more geometry in places. Any technical shortcomings are made up for by the game's quirky style, though, which is led by the great design for the Zin. The robots have a really cool clockwork look, and their gaping metal maws and beady glowing eyes make them appear downright evil. The other enemies and bosses have a lot of personality too, as does the steely and heroic Maximo, who once again can be stripped of his armor and forced to run around in his undergarments. Amusingly, the underwear upgrade you currently have equipped is the one that will show on your character model when you're in the buff. These kinds of humorous stylistic touches really make Army of Zin a pleasure to look at while you're playing.

Maximo's sound design is generally quite good as well, with plenty of appropriate sounds scattered all over the place to enhance the feel and atmosphere of the action. There's all manner of clanging and crashing sounds associated with the Zin robots, and they make a great screeching sound when they come hurtling from the sky to attack you. Thankfully, the voice acting is quite appropriate for the game and doesn't grate at all. The music is pretty moody or epic or what have you, depending on the level--which is to say that it generally fits in and doesn't clash with the goings-on. Alas, it's not all that memorable. The only real quibble we have with the game's sound involves the fact that it sometimes seems a little low-fi, for lack of a better description. It's as if the sounds were sampled at a lower rate than usual and are a little muddier for it.

By definition, Maximo vs. Army of Zin is a great sequel. It identifies flaws in the first game and fixes them, and it also adds a healthy smattering of new and improved gameplay as well. Yeah, it can be a maddeningly difficult game (just try it and see!) but it's also a naggingly addictive one. Army of Zin is expertly paced--the even distribution of new items and abilities keeps the game fresh all the way to the end--so even when you're ready to hurl your controller (and various expletives) at the screen, you just can't help but keep playing. It's not for the faint of heart, but if you're looking for complex and rewarding action-platforming, Maximo vs. Army of Zin really satisfies. 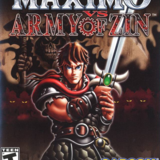