Leviathan fills in a few of Mass Effect 3's story gaps, but a grand reveal doesn't fully overshadow the plodding detective work that precedes it.

The Milky Way harbors untold mysteries. Mass Effect 3: Leviathan solves but one of the enduring enigmas left largely unexplained by the spacefaring series. As Shepard, you take on the role of supersleuth, spending much of this downloadable add-on piecing together clues that guide you to a final revelation. Yet revelations are most stunning when emotions are high, and Leviathan's meandering pace doesn't build enough tension for the payoff to leave you breathless. Leviathan fills a cavity previously left to fester, but doesn't rise above its role as a plot-hole plugger.

Yet there are impactful moments here: one that tugs at your heart, and another that fills you with ominous dread. The former scene is one of mourning, demonstrating how a strained relationship doesn't make losing a loved one any easier. Leviathan handles the complex emotions with care, and benefits from sensitive voice acting that smartly avoids melodramatic sobs. The latter moment takes place underwater, where gorgeous and entrancing deep-sea vistas contrast with the danger of an entire ocean threatening to squeeze you out of existence. It's here that the story means to reach its apex, but ultimately fizzles, the dramatic reveal lapsing into dry dialogue, and the remainder of the story playing out in cutscenes.

Compared to Mass Effect 2's finest add-ons, which matched emotional storytelling with exciting gameplay, Mass Effect 3: Leviathan comes up short. That oceanic reverie is singular but brief, the gameplay already having drawn to a close before you reach the story's climax. The bulk of the adventure occurs in a laboratory on the Citadel, where a scientist has discovered signs of a creature or being so powerful as to be a potential reaper-killer. Thus begins your career as detective Shepard, walking around the lab and clicking on things until you're allowed to continue.

These adventure-game episodes seem designed to build suspense and deepen the narrative context, but they're more like busywork. Part of the joy of a point-and-click adventure is using clues and items to solve puzzles, which in turn leads to narrative discovery--a reward for your intellectual effort. Though Leviathan has puzzle-like events, they're too simple to be gratifying, or to even be called puzzles at all. The mechanic is repeated multiple times, each subsequent visit to the lab causing the pace to suffer as you wander around the same space, clicking on that which was unclickable before, and hoping to get to the good stuff. Attempts to create a sense of mystery instead lead to awkward moments when researchers and assistants speak in zombie-like tones, their eyes staring blankly at Shepard, who takes a remarkably long time to figure out that something's not quite right with these people. At least the charming EDI is often there to keep you company, and later, Vega shows up unannounced to comment on one of Leviathan's cheekier elements.

The good stuff comes in the form of some exciting shoot-outs featuring hulking brutes and shrieking banshees, always an intimidating combination in Mass Effect 3. There's more bumbling around than shooting, so firing off some biotic powers and lighting husks on fire with incendiary rounds come as welcome jolts of energy. Even the prerequisite escort mission is palatable, the area giving you a chance to leap across small chasms and find new cover opportunities. It's here that you look to the frightful skies, where the reality of a reaper invasion is all too clear, the harvesters swarming above making for an ominous presence as long as you don't look too closely at their stuttering animations.

It's hard not to look at Leviathan in light of previous add-ons' stories. Mass Effect 2: Overlord's electronic jolts and disturbing conclusion punctuated a story that you experienced firsthand, rather than heard from the lips of others. Lair of the Shadow Broker then raised the bar with a memorable lightning-laced shoot-out in what might be the series' best combat environment. Leviathan's standout sequence could have been remarkable, had developer BioWare directed the tempo as carefully as it had done before. Yet for all its meandering, the adventure occasionally stumbles onto something special, and the sparks of brilliance that make this series so beloved are ignited once more. If only they'd shone brighter and remained longer. 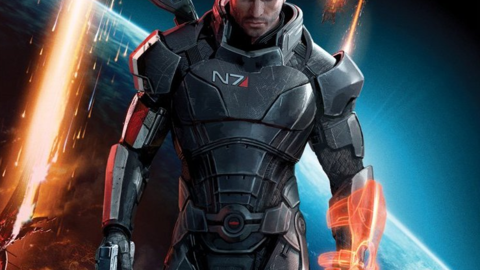 Mass Effect 3 is the conclusion to developer BioWare's action role-playing sci-fi trilogy and completes the story of its protagonist Commander Shepard.