Fans of the off-kilter action found in the previous versus games will surely be pleased with Marvel vs. Capcom 2, as it represents the first major set of changes the series has ever seen.

The versus series has always been about pure 2D insanity. Capcom's long-running line pits Street Fighter characters against all manner of fighters, including Marvel comic-book characters and other Capcom characters. But the over-the-top nature of Marvel vs. Capcom 2 makes the other versus games look subdued by comparison.

Capcom has shaken things up a bit with Marvel vs. Capcom 2. For starters, the six-button, three-strength system that has served all of the Street Fighter games for the last decade has been replaced with four buttons, with two punches and two kicks. The buttons that used to serve as fierce punch and roundhouse kicks are now used to call in your offscreen characters for helper attacks, which leads us to the other major change in MVC2 - you now select three characters instead of two. Also, your super combos can be linked together. If you pick the right three characters and link your supers together just right, you can get combos that range in the hundreds of hits. Beyond that, it's roughly the same collection of fighters from the first Marvel vs. Capcom with a few new characters, such as Cable, Jill Valentine, and Amingo thrown in, and some old characters, like Iceman, brought back from previous Marvel-licensed fighters. The gameplay is still very similar to that of the previous Marvel vs. Capcom, with a focus on screen-filling fireballs and ridiculous button-tapping air combos. Like its predecessor, it isn't the most balanced game in the world, but that doesn't keep it from being a great deal of fun.

To go with the updated gameplay, the graphical style of the game has been similarly updated. While the characters are still made up of 2D sprites, the backgrounds are pretty amazing 3D scenes, full of movement and vibrant color. The only real problem with the graphics is only noticeable if you're using a nice TV with an S-Video connection. The cleaner your connection, the more you'll notice how pasted-on the sprites look on the 3D backgrounds, and the characters are a little on the blocky and pixelated side, as well. Again, this isn't really detectable on most normal TV connections, so if your A/V equipment isn't terribly nice, it won't be a problem at all, except for the last form of the final boss, who looks blocky on just about any TV set.

The soundtrack is also worth mentioning. While the sound effects are of the same great quality that you've come to expect from Capcom's fighters, the music is anything but what you'd expect from a fighting game. While previous games have been accompanied by the typical style of rock and techno that make up most game soundtracks, MVC2 features a strange sort of jazzy lounge music. You'll either love it because it's so hilariously out of place or be annoyed to death by its happy, upbeat rhythms.

The Japanese version of MVC2 had an online feature, which let you battle against other players over a specialized network, and you could also hook up your VMU to the arcade version of the game. These options were used to earn points that could be used to unlock characters, stages, and new costume colors. Both of those options were removed from the US version of the game, and now there is only one type of point, and you earn points simply by playing the game in either arcade or versus mode. Aside from unlocking characters with points, you can also trade points with other players by hooking two VMUs together.

Fans of the off-kilter action found in the previous versus games will surely be pleased with Marvel vs. Capcom 2, as it represents the first major set of changes the series has ever seen. It's just a shame that the network battle from the Japanese version couldn't have been carried over to the US release, as online play would have really added a lot to the game's appeal. 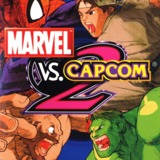