Mario's soccer sequel is a markedly more enjoyable game than its predecessor, especially for those who prefer the multiplayer arena.

Mario sports games are always crazy, but it could be said that the pudgy plumber's first foray into the world of traditional football in 2005's Super Mario Strikers for the GameCube wasn't quite crazy enough. As goofy a game as it was, the dearth of the true Mario brand of wacky was apparent, and the game suffered for it. Mario Strikers Charged for the Wii is essentially a sequel to that game, and its first and foremost goal seems to be to amp up the crazy factor. Developer Next Level Games has certainly succeeded in this area, though the final product ultimately resembles less the game of soccer and more some kind of psychotic episode of flaming balls, thunderous hits, and flying shells coming from every which way. Sometimes this chaotic gameplay gets a bit messy, and some of the gameplay elements, like tackles and the artificial intelligence in single-player, aren't perfect. Still, if you can get a grip on the action, you'll find Charged to be an addictive multiplayer game, especially if you plan to take it online.

Much like the original Strikers, players begin by selecting a team captain from primary Mario characters such as Luigi, Bowser, Peach, Daisy, Wario, and, of course, Mario himself. There are 12 captains in all, each with unique stats in movement, shooting, passing, and defense. Once you've got your captain, you then select three teammates from the lexicon of lesser Mario characters (Shy Guy, Monty Mole, Birdo, and the like). For those who played the original Mario Strikers, you'll note that this is different from the team selection in the last game, where you could only pick one type of teammate. Here, you get to choose three different ones, and they're every bit as varied as the team captains. They even get their own unique megastrike shots, the big power shots that goaltenders tend to have a difficult time with, which you can pull off by holding down the B button.

Of course, they're not quite as powerful as the captains' shots. While someone like, say, Boo can essentially go transparent and try to fly his way past the goaltender, and the Hammer Brothers can toss a gaggle of hammers at the goalie before eventually kicking the ball, these shots are not guaranteed to go in. But the captains' shots are a whole different ballgame. When you hold down the B button long enough with a captain, a golf-swing meter pops up that begins by counting up toward the number six. This actually determines how many balls you're going to fire at the goaltender in rapid succession. The meter then swings backward, and depending on how well you time the button press on that return swing, it'll be more or less difficult to stop the forthcoming shots. Once all meters are set, your captain leaps into the air and starts firing off shots like some kind of Dragon Ball Z castoff.

Against the artificial intelligence, you're practically guaranteed at least one goal out of the proceedings (though you often end up landing more), but when you're playing against another player, or you're forced to stop one of these shots yourself, a little goaltending minigame pops up. You simply point the Wii Remote at the screen, and as balls come flying, you aim the onscreen reticle at each one and press A to try to stop all the shots. It can get pretty hectic, but it's actually a fun and clever way to handle the perspective of the goaltender in these situations.

Of course, that pales in comparison to how hectic the action can get during normal gameplay. Knowing how to do a megastrike shot and actually pulling one out are two entirely different things. If it's not some random opponent running up behind you and shoulder-checking you into the pitch before you can pull out the shot, it's a gigantic red shell or a chain chomp running amok across the field, slamming into you and everything else. Weapon power-ups don't come constantly, thankfully, but many of the different fields have their own pitfalls that lend toward even more chaos, like electric bolts that move up and down the pitch, and huge balls of magma that lay waste to anything in their path. Frankly, the game would be crazy enough if all you could do was check your opponents. All you have to do to knock an opponent silly is quickly wag the remote back and forth while standing near an opponent. It's the only significant bit of motion control in the game, and it works well--perhaps too well. You can usually get shots off against the weaker AI settings, but on higher settings, and against live opponents, prepare to get checked, and checked often.

Even with that prospect in mind, Mario Strikers Charged is a game best played in multiplayer. The single-player modes don't extend beyond a standard versus mode, a challenge mode where you're presented with a series of different scenarios (making a comeback from a three-goal deficit, maintaining a shutout, and so on), and the road to the striker cup, where you choose a team and compete for a variety of different cups in round-robin-style tournaments. The mode selection is solid, but playing against the AI tends to be either too easy, or obnoxiously difficult, as catch-up AI tends to be a big factor on the higher settings.

Not so in multiplayer matches, which is a big part of why the multiplayer is just inherently more fun. Up to four players can play both offline and online. The online play is obviously the big draw here, and we're pleased to say that it's pretty much what makes the game worth owning. Though you still have to go through the silly song and dance of getting game-specific friend codes for all your buddies if you want to play against them specifically, you can play in ranked matches against random opponents and bypass all that nonsense. You can engage in four-player play online, but it's with a limit of two players per console. There are also leaderboards that track daily stats as well as cumulative records. Though lag popped up in spots during our time with the game, practically every match we played with a good latency rating worked seamlessly. It's a shame there's no communication options online, but that issue aside, the online works nicely.

The one area where Mario Strikers Charged still lacks is presentation. The in-game graphics are certainly a step up from the original, with better-looking character models, far more crazy crap happening onscreen, and a frame rate that stays steady throughout. But smaller details are decidedly lacking. The megastrike shots, while neat-looking, also feel kind of generic, specifically the captains' shots. Each captain has a unique personal flavor, but all the shots just kind of look like cheesy anime fighting-game posing. Interestingly, the new shots for the sidekick players are arguably a lot more interesting and unique than the captains' shots. Cutscenes are sharp looking, but not much goes on in them. You get the same shot of one of the captains skydiving into the arena before every match, and that whole sequence feels kind of silly and out of place to begin with. The menus and the soundtrack are also pretty dull, and while there's a bit of voice acting from the various on-field characters, as well as some amusing chants from the crowd, there's no announcer in this game, so you don't get the big "GOOOOAAAAAAL" exclamation whenever you score.

Presentational quibbles and single-player opposition issues notwithstanding, anyone who enjoyed the last Mario Strikers game will certainly find Strikers Charged to be an improvement, and those who took issue with the previous game will find some of their complaints properly addressed here. That this is the first Wii game to do online play and do it well is a huge bonus. Those looking for a deep and consistently entertaining single-player experience won't necessarily find it here, but anyone out for some good, solid multiplayer fun, either offline or online, would do well to check out Mario Strikers Charged. 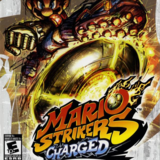