There are some good minigames in Mario Party 8, but the overly familiar, chance-heavy board game wrapper gets in their way.

The minigame masters at Hudson have long since proven they know how to produce gameplay that's bite-size and easy to digest. Mario Party, the video game franchise that eats like a board game, has now arrived on the Nintendo Wii for the first time with Mario Party 8, and it brims with plenty of pick-up-and-play action. The move to the Wii could've been a great time to revamp the series, and while many of the minigames make sound use of the Wii's unique controls, it's ultimately just more of the same Mario Party.

This year, Mario Party goes to the Star Carnival, which is run by the symbiotic duo of MC Ballyhoo and his talking top hat, Big Top. The carnival theme doesn't really penetrate past the menus, though, and once you're in a game, it's pretty much the same old Mario Party that Hudson's been churning out for the past eight years now. The primary mode still plays like a board game, with four players smacking the dice block to move across spaces, collecting as many coins and stars as they can before they finish a set number of turns, and of course, playing minigames at the end of each round.

Mario Party 8 doesn't have as many minigames as Mario Party 7, nor does it support eight players or include a goofy microphone peripheral. It does, however, make generally solid use of the Wii Remote, and the number of palette-swap minigames seems lower. A good number of minigames will have you holding the remote sideways in standard gamepad fashion, but you'll also swing at baseballs, furiously shake a can of soda, do some tightrope walking, use a paddle to help row a boat, and more, all by gesticulating with the remote. There are also some good references to past Nintendo games couched in these minigames, such as a first-person ghost-hunting minigame that appears to take place in Luigi's mansion.

While many of the minigames are four-player free-for-alls, there are plenty of one-on-one, two-on-two, or one-on-three games to mix things up, but what really helps keep the minigames fresh is the varied focus of the minigames. The minigames never get terribly complicated, though there's always a practice option if you're having trouble grasping one of the high-concept games. This simplicity makes it easy to jump into Mario Party 8 with casual players, but it also cripples the lasting value of the game. There are a number of minigames that, after the first time, you'll probably never want to play again.

Bogus minigames aside, the biggest problem with Mario Party 8 is how chance-driven the game can be, which, unfortunately, is also one of the franchise's defining characteristics. Roll an unfortunate number and land on a bad space, and you could find yourself going from first to last, losing most of your coins, or even one of your stars. There are six uniquely themed boards to play on here, and most of them come packing a different gameplay gimmick as well. The Donkey Kong- and Super Mario Sunshine-themed boards are traditional Mario Party game boards, with several paths that loop back onto each other, though they get more inventive from there. The haunted mansion level's layout is a mystery when you start, requiring you to explore its rooms and corridors as you hunt for stars. One board takes place on a moving train that you must run through, as well as on top of, as you collect coins to impress a movie star who's onboard. One of the cleverer boards looks an awful lot like the Earthbound level from Super Smash Bros. Melee, where winning involves you investing your coins in various hotels. The rules specific to these different boards could've injected some much-needed strategy to the action, if the game just would've let them, but fortunes still reverse so severely and so easily that any planning seems futile.

Perhaps even more disappointing than the same-old structure of Mario Party 8 is its lackluster presentation. The Mario Party games have never looked particularly amazing, and have relied on the strength of its cast of characters and a real air-horn level of enthusiasm to make up the difference. Mario Party 8 is certainly loud in multiple senses, with a garish color palette and a stomping, blaring marching-band soundtrack, but the visual fidelity hasn't been improved at all in the move from the GameCube; in some ways, it actually looks worse now. The aliasing is a real problem, and save for the menus, the game is either incapable or unwilling to fill a widescreen display. Instead, the game soaks up the extra real estate with gaudy borders. It's awkward, and it's borderline embarassing that a Nintendo-published Wii game doesn't have full widescreen support.

Mario Party had been the only persistent minigame franchise for years, and Hudson got a little too comfortable because of it. The fact that there are more interesting minigame collections out there now, like Rayman Raving Rabbids, puts that laziness in stark relief and makes it more difficult to tolerate. If you've got the patience to dig past the skill-free board game portions of Mario Party 8, there are some genuinely inventive minigames to be played. The point, though, is that you shouldn't have to dig at all. 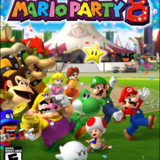