For Mario Kart fans, Mario Kart 8 Deluxe might look like more of the same with small Double Dash-inspired tweaks. But thanks to a series of updates both big and almost unseen, it's the version of Mario Kart to get. If you don't own a Wii U or skipped out on Mario Kart 8 the first time around--or even if you've played it before--Mario Kart 8 Deluxe is worth your time. It plays beautifully on Switch in both handheld and docked mode, and its core racing is as exciting as ever. And, most notably, it completely revamps the original's lackluster Battle Mode, rounding out an already great racing game.

In the original version of Mario Kart 8, the balloon-popping Battle Mode disappointingly repurposed tracks designed for regular racing instead of having arenas designed specifically for a completely different way of playing. All of those tracks have been replaced in Deluxe, and the Battle maps we get make all the difference. There are five new maps and three retro maps, and each has choke points great for face-offs built around central areas where you can mercilessly toss items at your friends. And unlike on regular racetracks, those items have a much greater chance of actually hitting someone instead of flying off to the side pointlessly. The Splatoon-inspired Urchin Underpass and the almost Overwatch-like Dragon Palace are standouts.

In order to fully take advantage of these new maps, Battle Mode introduces modes that weren't in the original. Balloon Battle is of course back with a few changes--it's point-based rather than last-man-standing, which keeps battles exciting right up until time is called, and it's nice to not get booted out of the fun when all your balloons are gone. There's also a completely new mode called Renegade Roundup that's very similar to cops-and-robbers tag, meaning it capitalizes on Mario Kart 8's strong racing for a different kind of battle.

Finally, there are three modes that return from previous Mario Kart games--Bob-omb Blast, Coin Runners, and Shine Thief--that all complement the maps, with my personal favorite being the explosive, competitive mayhem of Bob-omb Blast. You have to drive around collecting item boxes, throw the bombs you get at your opponents, and avoiding getting hit with bombs yourself, and it's very easy to get way too competitive amid a flurry of bombs dropping around you. Combined with the other modes, this is the varied, exciting Battle Mode that Mario Kart 8 should have had all along.

Regular racing is as strong as in the original and gets minimal updates in this version. All the tracks and characters from Wii U, including the DLC, have returned, and there are also a few new characters to choose from. Unfortunately, there are no new tracks, so if you've done your share of racing (and yelling at) your friends on the existing tracks, you'll pretty much know what to expect.

This is the varied, exciting Battle Mode that Mario Kart 8 should have had all along.

That said, the ability to carry two items at once is back from the Double Dash days, and that means slightly more items on the track to keep you on your toes. My mastery of the tracks from playing on Wii U was challenged a bit by a few more Blue Shells thrown my way. But your driving ability still matters more than in previous Mario Kart games, and racing in Deluxe is as enjoyable and rewarding for skilled players as it was originally. Precise drifting and a good handle on what kind of kart or bike configuration fits your style and the tracks you're on goes a long way.

Deluxe also adds some small quality-of-life updates that make for a more polished package. Load times are shorter on Switch than on Wii U, and the game takes advantage of the Joy-Cons' vibration capabilities--off-roading is bumpier and drifting boosts feel more satisfying thanks to a stronger sense of acceleration. Plus, you can change your kart configuration in multiplayer without having to leave the lobby first. (About time.)

Even if you didn't really care about Battle Mode, the smallest changes in Mario Kart 8 Deluxe refine an already great racing game. But the huge overhaul to the original's afterthought of a Battle Mode is a chaotic, varied opportunity to play very differently than in Grand Prix mode and well worth reinvesting yourself in Mario Kart 8 on Switch.

View Comments (299)
Back To Top
9
Superb
About GameSpot Reviews

Kallie finished every cup on 150cc with three stars and plans to do the same on 200cc (again). A complimentary code was provided to GameSpot for the purposes of this review. 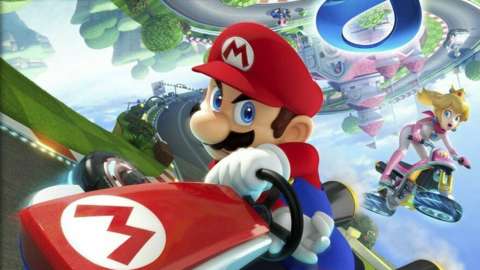 Mario Kart 8 introduces new racing circuit designs and antigravity karts that will have players driving upside down. Players will also enjoy a variety of series-favorite features, including the return of 12-player online competitive play, hang-gliders, underwater racing and motorbikes.