It's not as shocking as you'd expect, but Manhunt 2 still satisfies your primal instincts.

A lot has been made about Manhunt 2's supposedly ultraviolent content. It depicts a lot of grisly murders, gruesome decapitations, and a few swift kicks to the genitals for good measure. It's not as bloody as you'd expect, though: The much-ballyhooed blurring added to the most extreme acts makes it occasionally difficult to see exactly what bloodthirsty rages you're subjecting your victims to. However, don't take this to mean that Manhunt 2 doesn't deserve its M rating. After all, there's still plenty of gore, sex, and adult language to go around. There's also some solid, stealthy gameplay to back up all the eviscerations. It's got some problems, but there's a lot here for patient gamers to sink their teeth into. This isn't a series of random, bloody tantrums--it's a calculated study in what drives a man to madness, and to what extremes he will go to discover the truth.

That man is Dr. Danny Lamb (not a randomly chosen name, certainly), an asylum inmate who manages to escape thanks to a freak electrical malfunction. He doesn't remember much, but he's able to fill in bits and pieces through flashbacks, and with the help of fellow inmate and constant companion Leo. As Danny begins to remember more and more, he finds himself getting to the bottom of a medical experiment called "The Project," and discovers just how involved he was in its development. The plot is missing the degenerate thrills of the first Manhunt, but it still has a script only Rockstar could pen. The raunchy quips you'll overhear from the game's self-described "hunters" are sometimes creepy, often hysterical, and always worth a listen.

Just don't expect anything as memorable as the encounter with Piggsy in the original Manhunt. Aside from the very nature of stealth gameplay (you always fear getting caught), there's nothing scary here. You're still fighting for your life, but unlike the original game's protagonist, Danny could simply disappear if he wanted to. The danger is secondary--a result of his need to find out exactly who he is and how he ended up this way. Uncovering the truth and revealing the past makes for an interesting tale, but it's not as engaging as the snuff-film premise of the first, and it doesn't really ever take off, remaining content to mostly smolder until it pops its highly foreshadowed surprises. At least as far as the Manhunt games are concerned, fighting to stay alive is more compelling than fighting for your sanity.

It's still an interesting story that is accentuated by an appropriately dirty and dank visual design. You'll explore a raunchy, sticky sex club; gritty gas stations; and slummy warehouses; all places that seem as if you could catch some nasty disease just by looking at them. A scratchy, slightly blurry filter gives everything the faint haze of scan lines, as if you're watching an old VHS tape. The PSP version is a direct port of the PS2 release, and though Manhunt 2 looks nice on its console brethren (if not exactly impressive), it looks superb on a handheld where the occasionally stilted animation is less noticeable. You will need to deal with the occasional split-second pause while the game loads data from the disc, but these moments don't interfere with the adventure.

The doomed ambience is further accentuated by a minimalist sound design that features an eerie soundtrack and limited environmental noise. Silence is put to good use here to create moments of tension when you must remain perfectly still, which makes the occasional eruption in the soundtrack even more effective. The voice-overs are good too, and not just from the leading men, but also from the random hunters you overhear. You'll hear guards in the sex dungeon whine about their sexual frustration and masked patrolmen taunt you to come out of the shadows, and most of it's acted with just the right amount of coarse charm.

There are lots of shadows in Manhunt 2, and you'll be hiding and waiting in them for a good portion of the game. You control Danny from a third-person view as you avoid the watchful eyes of enemies and attempt to pick them off one by one. The easiest way to do this is to hide in a dark corner and lure a foe over by throwing a brick or punching the wall. The noise will attract nearby hunters, who have a tendency to walk over and stare straight at you for a moment before shrugging their shoulders and then walking away. This is your chance to perform one of the infamous execution moves, which are the violent showcase of Manhunt 2's visceral action.

There are three levels of executions that depend on how long you hold the execution button. Functionally, all three levels result in your adversary's untimely demise. But in this game, you want to kill with style, and a level-three execution is literally a bloody mess. The execution you perform depends on the weapon you have equipped, and whether there are any interesting environmental features nearby. You might stab the hunter in the back, kick him in the crotch, then slam a manhole cover on his head. Or perhaps evisceration with a crowbar is more your thing. Pyromaniacs may prefer to douse him in gasoline and set him on fire. Part of the execution is depicted through blurry red filters and grainy black-and-white effects, but you can still clearly see portions of the grisly kill. It's an interesting, artsy effect that gives the impression of Danny's lingering insanity while slightly softening the bloody nature of the act. It's not quite as shocking as you may have heard, but pulling off execution moves can be rewarding, given that they often cap several minutes of patient sneaking and nail-biting stillness.

The execution effects are cool from the story perspective, but they linger for a few seconds after the execution is over and you are deposited back into the level proper, which is a big frustration in a stealth game where you need to stick to the shadows. That moment can mean the difference between life and death. Manhunt 2 is often very unforgiving of your mistakes, and a couple of hunters with nightsticks are tough to handle. Forcing you to wait for the filter to clear so that you can see where you're going is an unnecessary annoyance in a game that requires so much precision of movement.

As you would expect from a stealth action game, you can hug walls and peek around corners. There are some other mechanics at play as well, such as your need to be perfectly still should a hunter get too close while you're lurking in the shadows. At these times, he might be inches from your face, and you need to ensure you stay completely hidden by pressing the button that flashes on the screen. However, there are some nagging problems with the stealth gameplay, and enemy artificial intelligence sits high on the list. Enemies get stuck jittering between objects, which forces you to unstick them by grabbing their attention. They'll occasionally run past without noticing you, or patrol a three-foot-square area over and over again for no apparent reason.

Danny can hold his own somewhat in standard melee combat, as long as he is armed with the right weapon. You'll use clubs, knives, shards of glass, and plenty of other instruments. Melee fisticuffs are deliberate affairs, and you should expect to handle only one enemy at a time with ease--if that. If you attract the attention of more than one, it's better to run back into the shadows. Mistakes will cost you: Some weapons will knock you down, and it takes forever to get back up, which almost always spells certain death.

There's also a small assortment of firearms in Manhunt 2. Shooting enemies isn't as gratifying as beating them to a pulp with a table saw, but headshots still produce a smattering of blood. In most of these circumstances, you'll be hugging a wall or crouched behind an object, popping out to take potshots. Danny is not a weapons expert, so perhaps accordingly, the controls handle loosely. Nevertheless, shooting doesn't feel as precise as you would like. It's also not as challenging as the proper stealth elements mostly because your foes have the aiming skills of a third grader with a water pistol, and may even unload clip after clip into nearby walls.

Yet there's no doubt that fans of sneaking will get a lot out of Manhunt 2. Aside from the occasionally flaccid gunplay, the game is highly challenging, especially so on the appropriately titled insane difficulty level. Some of the level designs are tricky, such as one in which a helicopter's spotlight keeps you constantly on the move. This isn't for everyone; if you're prone to fits of frustration or expect to be able to easily recover from mistakes, Manhunt 2 won't do you any favors. But if you're into that sort of thing, you'll enjoy the 15 hours or so of gameplay it provides, and may even want to try unlocking the alternate ending.

Manhunt 2 is a good fit on the PSP. Part of this has to do with the clarity of the screen, which makes execution moves look crisper than they do on consoles. Even more importantly, it doesn't feel as if anything was compromised for the less-powerful platform. Few games look this good on a handheld, and even fewer combine such technical prowess with enjoyable mechanics. If you like a good, sneaky adventure, you'll find a lot to chew on here. 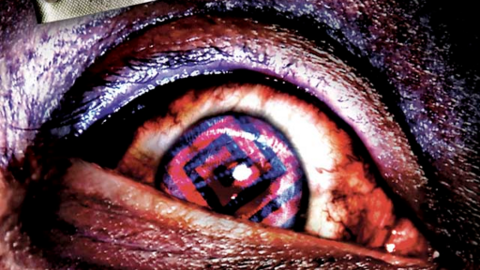 Manhunt 2 continues the suspense and stealth of the first game with a new design and storyline.