Although it doesn't have flashy 3D graphics, Madden 98 is still the most realistic and complete football game on the market.

For the last few years, each new edition of the Madden franchise has stepped forward in some areas, but stepped back in others. Football fans will be happy to know that Madden NFL 98 has finally broken the trend by containing nothing but improvements across the board.

The biggest improvements in Madden 98 are its gameplay and AI. EA spent more of Madden's development cycle than ever on its AI. The results are obvious: This Madden is by far the smartest of the series - and of any football game ever made. The days of running up the score with your eyes closed are now over, as the computer defense now accurately reacts to offensive plays. If you pick the correct defense, you'll be in a position to make the play (assuming your players are not outclassed). Although the offensive AI could use more work, Madden 98 best represents the chess game behind the high-paid muscle on the field. Beginners need not be scared by this realism, as Madden offers plenty of difficulty levels to ease any player into the game.

Madden 98's NFL atmosphere is outstanding. Pat Summerall's signature play-by-play and Madden's blustery comments are a given, but it's the extra things that set it apart from the rest of the field. For example, each stadium is identical to its real-life counterpart, right down to the sandy remnants of baseball diamonds found during early season NFL games. Suspense is felt as the "chain gang" measures for a first down (Summerall: "It's gonna be close"), sometimes followed by relief as former NFL referee Red Cashan points and proclaims "First down!" in his southern drawl.

Like last year's game, Madden uses 2D player sprites in 3D stadium environments. Although some might scoff at Madden 98 not using polygons like its chief competitor GameDay 98, these player sprites are well animated and detailed. Each player has his real number on the back of his jersey, and his figure is given depth by shading and pseudo light sourcing. If the field turns into a mud bowl because of rain, the players suffer by having dirty, brown jerseys. These well-drawn players also move realistically during gameplay. One-handed grabs, goal-line dives, and players crumbling when hit are well dramatized on the field. And speaking of drama, Madden fans will be glad that the ambulance is back.

Although it doesn't have flashy 3D graphics, Madden 98 is still the most realistic and complete football game on the market. Football fans yearning for a challenging football game should buy this outstanding title. 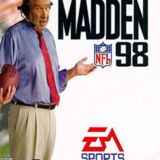 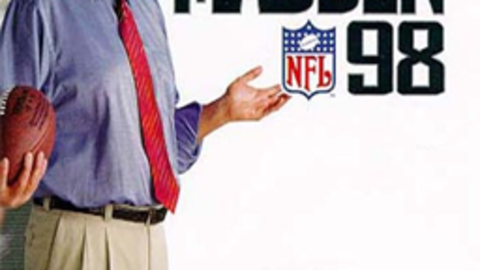 Although it doesn't have flashy 3D graphics, Madden 98 is still the most realistic and complete football game on the market.