Epic struggles involving dragons, wizards, demons, and warriors never really get old, do they? The first entry in the Lunar series--a game that blended all of the aforementioned elements deliciously--has seen a lot of love during the past few decades. After making its grand debut on Sega CD in the early '90s, it quickly grew to become one of the top-selling games for the system. It's already been remade a handful of times for different consoles since then, but many years have passed since we last had a chance to take up a mighty blade and chase down the magic emperor while striving to become a world-renowned dragonmaster. Game Arts and XSeed saw fit to change that by lavishing the original adventure with cartloads of TLC. Indeed, Lunar: Silver Star Harmony on the PSP is the remake to top all Lunar remakes.

At this point, Lunar's tale has been told many times and in slightly different ways. It follows a young boy named Alex who dreams of some day becoming a great and noble warrior like his legendary idol dragonmaster Dyne, who mysteriously vanished years prior. In his absence, a growing darkness has spread and begun to flourish. It's in this uncertain time that the naive Alex gathers a gaggle of companions and sets out on a carefree adventure-seeking excursion beyond the safe confines of their local village. Marching right into the path of danger, they soon find themselves faced with keeping the world from falling into evil hands. Silver Star Harmony is faithful to the original excellent narrative while also offering additional scenes and interactions that shed more light on the story, as well as the relationships that develop between characters. A new prologue sequence that provides important backstory is one of many bonus scenes scattered throughout the game. If you're a newcomer, these vignettes definitely help round out the tale nicely, but series fans will really appreciate the expanded plot.

Anyone who played any of the previous versions will be blown away by how much the new graphical makeover improves the experience. While you'll still find the same anime cutscenes from past remakes carried over, all of the game's visuals are completely redone with crisp hand-drawn 2D artwork. The new isometric town designs are particularly slick. Your party members and the myriad opponents they face are all infused with lively animations that give them a life of their own. The many different enemies you bump into are strikingly designed and unusually creative. You go up against everything from furry elf-yetis with pointy ears and blobs of translucent slime that contain a bug-eyed fish creature inside to tentacle-adorned mermaid beasts that vomit poisonous purple goop out of their dual-purpose mouth/eye sockets. The game's bestiary remains one of the weirdest around.

It's all but impossible to avoid the inevitable level grinding that sets in with most role-playing games, and Silver Star Harmony doesn't shirk its old-school sensibilities in this regard. There are only so many times you can effectively dodge around wandering monsters as you slink around dungeon areas because they reappear every time you exit and reenter an area--something you do frequently in some areas. The good news is the game offsets this traditionally tedious element with a smart and flexible turn-based battle system that lets you exercise a broad range of control depending on the situation. If you choose, you can handpick the actions of your characters in your party round-by-round, instructing them to attack, use items, whip out spells, or deliver superpowerful special abilities with the cool Arts system borrowed from Lunar Legend. A greater level of micromanagement is a necessity during tough boss battles that require careful attention and constantly shifting tactics. But when you're trying to level up or simply plowing through areas that are bloated with creatures that have to be dealt with in order to proceed, you can kick the artificial intelligence into overdrive for individual characters or the entire party and just tap the same button each round to engage whatever preset behaviors you've selected. This dulls much of the sting of churning through some of the more repetitive battles.

Silver Star Harmony's expansive plot sends you gallivanting around various regions of the world where you encounter a remarkable spread of oddball towns and communities to explore. In between dungeon crawls and treks through monster-infested terrain, town settlements provide new equipment, as well as often contain clues needed to progress the story. These bustling hubs of activity are also rife with citizens to talk to and interesting nooks to explore. The game's numerous non-player character interactions are particularly entertaining at times because folks seem all too eager to bend your ear about the most random and obscure stuff that crosses their minds. Walking into someone's home and hitting him or her up for info yields some surprising and frequently humorous dialogue. In addition to lots of amusing text-based conversation, the game is packed with some excellent audio. The voice work sometimes alternates between being really well done and being really annoying, but it does fit in well with the characters and the anime scenes. Additionally, the quality original score has been remastered for the PSP and sprinkled with brand new tunes.

Lunar's debut had a bold personality that has successfully shined through in past remakes. Fans can be assured this tradition continues on strong in this refined and tightly honed PSP revival of the classic. Not only is everything that made the original adventure such an enthralling journey to begin with still intact, but it's also substantially amplified and improved upon through all of the new changes found in this definitive remake. Lunar: Silver Star Harmony works well on many levels. As such, it's a real treat for your RPG sweet tooth. 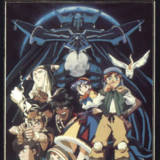