Lost Planet: Extreme Condition makes shooting giant bugs every bit as fun as it should be, and even though it ends too quickly, you'll have a blast while it lasts.

With a game like Lost Planet, in which you do nothing but shoot giant insects in a snow-covered wasteland, you'd almost expect publisher Capcom to come up with a tagline like, "The world is covered in ice, but the action is just heating up!" But Lost Planet: Extreme Condition takes itself more seriously than that, despite having a distinct Starship Troopers-on-ice feel to it. The exaggerated, almost campy sci-fi theme works well for this game, though, because while it is a very simple, straightforward shooter, the action moves at a brisk pace, there are always plenty of things to shoot and blow up, and the larger-than-life enemies are incredibly fun to fight. As Lost Planet skillfully proves, you don't need much else to make a great game.

The game takes place in the distant future, when humans have left Earth in an attempt to colonize other planets. On the frozen planet known as E.D.N. III, the colonization efforts seemed to meet with some success, but eventually the humans ran up against some strong opposition in the form of massive insectlike aliens known as Akrid. In battling the hostile Akrid the humans figured out that the creatures contained within their bodies a thermal energy source that could be gathered and used as a source of heat and energy--two vital components of a comfortable life on a barren, snow-covered wasteland. Instead of fleeing the planet in search of, say, someplace not frozen, the humans decided to stay on E.D.N. III and develop heavily armed mechs known as Vital Suits with which to fight the Akrid and hoard as much of their precious thermal goo as possible. But the humans aren't just fighting the Akrid--they're also fighting each other. Groups of outlaws known as snow pirates roam around in their Vital Suits collecting thermal energy and generally causing trouble.

You play the game as Wayne, a snow pirate who was discovered buried under the snow and ice. He has little memory of his past, but he does remember that his father was killed by a large Akrid known as Green Eye. So Wayne sets out to hunt the Green Eye and avenge his father's death. The story gets more convoluted and weird from there, as oddball characters are introduced and abruptly go away and nonsensical plot twists get the story all tangled up. There are some lengthy cutscenes between each mission, but they aren't the least bit compelling; you can easily skip every one without missing much.

The weak characters and confounding plot don't derail the game, though, because like those of most action movies, the story in Lost Planet is completely disposable. It serves its purpose in that it sets you up to fight lots and lots of aliens and humans using a wide variety of superpowerful weaponry, and that's all it needs to do. You play from a third-person perspective, controlling your movement with the left analog stick and your aim with the right. The default control scheme does take a few moments to get used to, simply because your character moves and aims slowly, and rather than remaining fixed in the center of the screen like most shooters, the targeting reticule moves around independent of the camera. Again, it doesn't take long to get used to, but it is a bit off-putting at first. There is also an aim assist that will snap your fire to nearby targets, but you can turn it off if you don't want the help. The controls for doing things like dodging or crouching are also awkward. Performing such a simple action requires you to push in the left analog stick and hit a button, or hold in the stick as you move around, which just feels cumbersome and slow. There are alternate control schemes, though, and even though you might not find one to be perfectly ideal, all of the most important actions are intuitive, quick, and easy to perform, which means the control issues rarely get in the way of the game.

As Wayne, you're dropped into a variety of environments in which you have to wade through scores of enemies to get to a boss at the end. The bosses range from massive spiderlike creatures that dwarf your character, shake the screen, and cause huge chunks of snow and ice to rain down from above, to nimble enemy mechs that attempt to pulverize you with ceaseless volleys of rockets and lasers. The boss battles are the highlight of the single-player game, and they rarely disappoint, even though their patterns and weaknesses are very plainly spelled out for you.

Between boss battles you'll fight scads of smaller aliens, many of which are simply scaled-down versions of bosses you've previously defeated. You don't have to actually kill any of these enemies; if you want, you can just sprint through each level to get to the boss. You are given some incentive to fight, though, in the form of thermal energy. Wayne has a special device on his arm that collects thermal energy and uses it to replenish his health and keep him alive in harsh conditions. Your thermal-energy supply is constantly drained, and when it's gone your health will quickly start to deteriorate, until you eventually die. Conveniently, all of the enemies you kill drop blobs of thermal energy that you can collect and store. You can also find data posts throughout each level that will refill your thermal energy as well as activate a map to point you in the right direction.

The constant energy drain is an interesting concept that could add a great sense of urgency to the game, requiring you to sprint between data posts and choose your battles according to how much energy you have left. But it doesn't quite work that way in Lost Planet. On the normal difficulty setting you'll almost never have to think about your draining energy, because it's so abundant that you'll rarely come anywhere close to running out. It does become more of a consideration on the harder difficulty settings, but even then the concept doesn't feel as though it's being implemented as well as it could be.

Contrary to what you might have seen of the game, Lost Planet doesn't take place entirely in vast open fields of snow. There are some indoor environments to explore as well, including fiery volcanoes and underground industrial complexes. The levels are all large and fun to explore, especially because you have a grappling hook that lets you reach precarious ledges and rappel from structures to reach new areas below. If you're feeling destructive you can spend a lot of time tearing the levels apart, because each stage is full of destructible walls, vehicles, towers, rocks, explosive barrels, and storage tanks. Combined with the aliens, guns, and explosions, the environments go a long way to keep the action intense. There's a decent amount of variety to the levels as well, and on the rare occasion that you aren't blasting aliens or snow pirates, you might find yourself taking in views of some of the great-looking landscapes.

There are also some nice weapon effects to please the eyes and ears. The weapons range from the traditional assault rifle and shotgun to more advanced weapons like plasma rifles and grenades that deploy inflatable, explosive decoys to confuse (and explode) your enemies. You can even pick up mech weapons and wield them on foot, which certainly looks cool but severely limits your movement. Most of the guns are appropriately satisfying to shoot, with the rocket launcher in particular producing some fantastic explosions. There's not much reason to go looking for extra weapons, though, because with the standard-issue assault rifle and grenades, you can take on just about anything.

As great as Lost Planet looks, the sound doesn't quite match up. There's some dramatic music that ramps up when the action is heated, but it isn't distinct or memorable. Still, the music is one of the high points of the sound and fits the game quite well. Some of the weapons--the rocket launcher, in particular--sound nice and powerful, but others lack punch. The mechs sound great; they crunch through the snow with their huge, heavy feet, and most of the enemy creatures shriek and scream menacingly enough. The voice acting is stiff at best, and sounds completely phony at worst. It's not a major issue, since nothing the characters say ever really matters, but it still makes the cutscenes a bit harder to watch. The human characters in the game will also shout remarks at you while you're fighting, but they sound hokey--still, there are only a few lines that get repeated often.

You can finish all 11 missions of the single-player game in about seven or eight hours on your first play-through. It will take considerably longer if you're hunting all the hidden target icons in each level, which you can collect to earn achievements. Fortunately, Lost Planet doesn't end with the single-player game. The game supports 16-player online battles with eight maps and four different game modes. There are the obligatory deathmatch and team deathmatch modes, as well as an all-against-one fugitive mode and a team-based mode called post grab, in which each team tries to activate and defend all of the data posts on the map. Because there are only eight maps available at the moment, you'll quickly be able to memorize the general features of each stage. However, you can select several different layouts for each map, which changes the location of data posts, weapons, mechs, and starting points. All of the maps are huge and are fairly well designed, with plenty of towering structures to climb with your grappling hook, as well as underground tunnels to explore, and even some underwater areas.

As you play online you'll earn points, which raises your level. As you increase in level you'll unlock new character skins to use in future matches. The leveling system is also a good way of judging how experienced other players are--although, of course, experience doesn't necessarily coincide with skill. The servers aren't segregated based on territory, so you can find yourself playing with people in Japan, France, the UK, and elsewhere. It's a great way to ensure plenty of available opponents, but you might run into issues when trying to communicate with teammates who don't speak your language. In our experience that didn't matter much, though; we found plenty of exciting, lag-free battles online with people all over the world.

Lost Planet is a great action game because it focuses on tense, thrilling battles that don't require much input beyond a constant trigger finger and healthy desire to kill everything that moves. There's very little downtime in the single-player game, and there's always plenty of stuff to shoot. That makes it easily entertaining if you're just in the mood to kick back and put your brain on standby for awhile. The multiplayer requires much more skill and a slightly more sophisticated, though no less manic, approach. As a result, the multiplayer game is an excellent complement to the single-player action. The brief campaign is a disappointment, but while it lasts, Lost Planet holds its own among the abundant shooters available for the Xbox 360--and considering how great some of those other games are, that's no small feat. 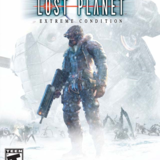