LocoCycle features a talking, battling motorcycle named Iris that drags a mechanic behind her by the pant leg. Iris' nemesis is a mean, gruff-talking motorbike that takes a moment to somehow munch on a giant hamburger in a roadside diner. Iris throws around Pablo, the mechanic, as if he's a battle-ready boomerang, all in the name of attending a festival she saw advertised in a biker magazine. Iris' Mecca is Scottsburg, Indiana. It's there where she belongs.

Who could have imagined that a game featuring so much ridiculousness could be boring?

Well, it's not all boring, though most of the fun comes not from the act of playing LocoCycle, but from watching it. Clever live-action cutscenes introduce you to Iris, Pablo, and a variety of other kooky characters, laying out the events that lead to a motorized battle machine dragging a Spanish-speaking mechanic down the open road. These wacky scenes had me laughing out loud frequently, especially during the first 30 minutes. Iris' translation functions are fried early on, so she constantly misinterprets Pablo's cries to be set free as encouragement, and she lets loose hysterical one-liners proving her single-minded focus. "Pablo, do you think in Scottsburg, Indiana, that the streets are paved with flags?" she drones. "I hear that freedom rides an eagle, which rides a motorcycle." Elsewhere, the references fly fast and furious, with Iris dropping quotes from Top Gun, Back to the Future, and Allstate insurance commercials. (Though I wouldn't argue that Pablo is, in fact, in good hands.)

The giggles flow freely when the evil motorcycle called Spike picks up his own happy-go-lucky human companion. While Pablo routinely begs Iris for sweet release, Spike's jocular friend keeps a grin firmly plastered on her face. She happily sips iced tea as Spike pulls her down the open road, and the strange situations that duo finds itself in are great sources of chuckles. As for Iris and Pablo, Pablo's dialogue is all in Spanish, with subtitles splashed across the bottom of the screen, even during gameplay. At first I was annoyed that I had to keep taking my eyes off the action so I could read Pablo's dialogue. But in time, you realize that Pablo has absolutely nothing to add, and that you can safely overlook his repetitive pleas, just like Iris does. And truth be told, the game's biggest joke--having Iris pulling Pablo down highways and across rivers--is stretched thin by the time you reach the end after about two hours of play.

LocoCycle has no sense of when enough is enough.

Typically, you drive down the road as you might in a driving game, though there is no danger of crashing into guardrails and dying a fiery death; the game just nudges you back on track as an on-rails shooter does. You usually take down the vehicles and robots that hound you in one of two ways: either by shooting them from behind with your unspectacular guns or by mashing buttons in similarly unspectacular hand-to-hand combat. Or would that be bumper-to-bumper? In any case, the cartoonish cars and trucks that speed in front of you erupt in sparks as you fire at them, but the shooting sequences suffer from sameness and are kept separate from the melee sections. More importantly, there is absolutely no sense of danger, and thus no tension instilled. LocoCycle is the easiest game I have played in quite some time. There is little need to swerve around traffic, and there are no nail-biting shootouts between you and your enemies. The gameplay is a mechanism for delivering jokes, not for delivering interactive fun.

The close-quarters combat also suffers from a major dose of shallowness. At first, these sections prove to be a visual delight. Iris leaps into the air and pummels flying combatants in jetpacks with her tires and chassis, occasionally tossing poor Pablo around like a spinning top. (That's gotta hurt.) But once the craziness of the concept wears off, you're left with a simplistic combat system that only requires you to hammer on the same two buttons over and over, occasionally hitting another button to counter an attack. These battles are so easy that I don't think I missed an entire counter in the game, and I racked up enormous combo scores without breaking a sweat. The whole idea of combo scores in this game is silly, actually, given how aimless mashing makes you an instant LocoCycle expert. You earn points to unlock passive benefits, but I'd unlocked them all before I even hit the final stage, and none of them meaningfully deepened the gameplay. Its roads may be bumpy, but LocoCycle feels oddly flat from beginning to end.

LocoCycle does try to diversify, but most ideas wear out their welcome before the game moves to the next one. Side-view boss battles are fun diversions at first, but the bosses repeat the same few attacks over and over again, and possess so much health that it takes seemingly forever to bring them down. A top-down vertical shooting sequence is a nice change of pace for two waves, but it, too, fails to rise above the most basic ideas. By the time I hit the third wave, I was bored. By the time the fourth wave arrived, I was actively annoyed. LocoCycle has no sense of when enough is enough, and as a result, too many of these detours feel like padding as opposed to creative variations.

"I hear that freedom rides an eagle, which rides a motorcycle."

Luckily, LocoCycle comes into its own in its final 20 minutes. I don't want to give away too much of the final chapter, since you have to see it to believe it. Let's just say that LocoCycle takes on the guise of a pure rail shooter, filling the screen with explosions and big robots, and using live recorded footage in its background to keep you gawking. And even before that, the game finds its way to a faster tempo. The quick-time events are accompanied by crazy scenes that remind me of 2009's Ninja Blade in all their dramatic insanity. You dodge falling boulders and careening school buses, evade Spike's frightening chained wheels, skim under semi trucks, and hang perilously from speeding helicopters. There's also a joyous minigame that has Iris flinging Pablo forward like a saw blade and spinning through legions of oncoming agents riding hoverbikes and surfing missiles.

I loved seeing LocoCycle through to its zany finale, because I enjoyed the jokes and Iris' robotic line delivery, and because I loved seeing the characters get themselves into silly situations. This would have been a great short comic film. But LocoCycle is a game, and in an unexpected twist of fate, it makes the act of catching rockets, fighting soaring robots, and rushing through the rural fields outside of Scottsburg, Indiana, blander than they deserve to be.

View Comments (152)
Back To Top
6
Fair
About GameSpot Reviews 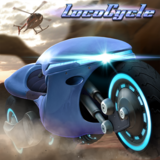 Kevin VanOrd likes when games bring the funny, and has played and enjoyed numerous Twisted Pixel games, 'Splosion Man and The Maw in particular. It took him about two hours to finish LocoCycle, at which point he returned to check out the various unlockables and other difficulty levels.