It takes more than a village.

Little Town Hero, developed by Pokemon studio Game Freak, tries to do a lot with a little. Fast-traveling from the mines near its titular town to its main street, the two furthest points on the map, only saves you about a minute or so of travel time. But the game wants its small village to matter, as it spends several hours familiarizing you with the small area and its residents. Its gameplay works the same way, doing for card-battlers what Pokemon did for party-focused, turn-based RPGs: distilling it into something the average person can wrap their head around.

And it works, sometimes. When you face down an imposing monster and cobble together a hard-earned win with all the tools at your disposal, it can make the equipment upgrading, crafting systems, and myriad currencies of other games feel like bloat. But more often, Little Town Hero doesn't leave the strict confines it creates for itself; instead, it plays things safe by constraining your options so things don't get too out of hand. While that occasionally produces some challenging moments, battles quickly begin to repeat themselves, making you wish you could see what its combat might be capable of if it weren't afraid to take more risks.

The star of Little Town Hero's tiny village is Axe, a young troublemaker quickly thrust into defending his home from monsters after he acquires a red stone that gives him an edge against them in battle. Because the village is protected by a castle and surrounded by steep cliffs, no one knows where the monsters are coming from, so Axe and his friends begin tracking down their origins.

The crux of Little Town Hero is its turn-based gameplay, which borrows elements from card games but throws in a couple of twists. Fights revolve around a small deck of cards, called Ideas. Cards can be red (which have high attack values and can damage the opponent directly), yellow (which can fight multiple times a turn as long as they have the health for it, but can't damage your opponent), or blue (which don't have attack or defense values but activate powerful effects). The goal in most fights is to break all three of your opponent's hearts by destroying all of their cards in a single turn by having them trade hits with yours, then attacking them directly.

Unfortunately, this setup lacks key aspects of other card games. The most glaring omission is that you can't actually build a deck of your own; for most of the game, you're stuck with a deck that caps out at just 13 cards. You can't alter or customize which cards you bring to battle, so standard battles play out predictably; you look at the defense of your opponent's cards, match them with the cards that can break them, and see if your hand can break theirs. Some cards have special effects, but you won't see any outlandish gameplay mechanics; most effects either buff your current cards, deal damage, or add another card to your hand. Fights get boring quickly, especially after you upgrade your cards by working your way through the skill tree using the Eureka points earned from fights.

You can also mitigate much of the luck that factors into most other card games, which makes it easier to get the cards you need but also drives home how simple the strategy behind each fight is. In order to survive longer fights, you need to recycle cards by either losing a heart or spending BP (a resource you build whenever you destroy all of your opponent's cards but don't have a card to break through and damage them directly). You can even swap out cards in your hand for those in your deck at the cost of BP.

While this curbs the element of chance that can sometimes be aggravating in card games, it also emphasizes just how often you end up using the same strategies each fight. Already used the card you needed to pierce through a boss' defense to win the last round? No problem; with 3 BP, you can revive your entire deck and add that car right back into your hand. You end up sticking to one or two strategies and running them time and again because, again, your deck is made up of just 13 cards.

Because of how small your deck is and how well you can mitigate the element of chance, decision-making is crucial, and I did have a few of the a-ha moments where I was backed into a corner but, through a series of smart decisions, came out on top. But those moments quickly give way to going on autopilot. There might be a few deviations based on whatever tricks your opponent pulls or which cards you draw in the first turn, but at some point, I was able to run my plan of making several of my defensive cards invincible, steamrolling whatever offense the boss had, and hitting them for obscene amounts of damage in a single turn.

Boss fights are a little more exciting, since they introduce a couple of strategic layers. Instead of fighting in place, you take on monsters across a large swath of the village, mapped out like a small board, moving a random number of spaces each turn (though you can control where you move with certain cards). Most spaces on the board have a special effect when you land on them, granting access to an ally who can deal direct damage, allowing you to combine two cards into one, or letting you use certain cards to activate explosive barrels or cannons. Some villagers might even have suggestions, like punching a monster in the nose, that add new, one-use cards to your deck specific to that fight. Planning out where I'd travel across multiple turns depending on which cards I had that turn made from some well-timed plays that won me some fights.

To counter these powerful bonuses, bosses offer up the kind of challenge the rest of the game lacks. Each boss has its own gimmick that nudges you toward different strategies; one boss might counterattack when you hurt it (encouraging you to find more indirect ways of wearing it down), or introduce cards that add a short timer to all of your moves until they're destroyed, forcing you to be quick and possibly screw up. For the first half of the game, I had a tough time against monsters, since it seemed like they always had the upper hand. As I upgraded my deck, that tide slowly shifted.

This doesn't make later boss fights breezy--some of them are tough. But even here, because you don't have that many options to choose from, your path to victory doesn't feel personal or creative. It also doesn't help that during boss fights, both sides gain a protective shield that has to be whittled down before hearts will take damage, which makes boss fights take longer than regular fights--certain battles took the better part of an hour to get through. The combination of the gradually lowered difficulty and increased length of battles meant I knew I'd emerge victorious, but I dreaded the 15 to 20 turns it'd take to get there.

Outside of battles, you can trek back and forth across the village to run errands for shopkeepers and complete side quests that earn you Eureka points. But the village itself isn't big enough to hold your attention for long; there are no other meaningful ways to engage with anyone outside of the couple of times they might ask you to get something for them, if at all. The only resource you have are Eureka points, so there are no minigames, equipment to buy, or anything else that might give combat more depth or provide an alternative from all the card-battling. The town only comes alive when monsters attack it.

Little Town Hero finds some success in avoiding some of the complex systems and tedious menus that can bog down other card games and RPGs, but it ends up suffering for it.

The story you unravel along the way and strings all the fights together is somewhat involved, but predictable and boring. Discovering the origin of all the monster attacks has a couple of twists, but mostly leads to a predictable story that moves at a crawl. Characters are largely forgettable, quickly fall into archetypes, and play out their roles without much room for nuance. A couple of later moments get some emotional weight thanks to a strong score from Undertale creator Toby Fox and longtime Pokemon composer Hitomi Sato, but characters are too shallow to hold up their end of the bargain, and the town doesn't have enough going on to make it worth exploring beyond where quests tell you to go.

Little Town Hero finds some success in avoiding some of the complex systems and tedious menus that can bog down other card games and RPGs, but it ends up suffering for it. Keeping your card options limited allows you to approach encounters with clever instead of relying on luck of the draw, but the deck size is too limited to break the mounting doldrum of subsequent fights. And while I did get to know this town pretty well, that's because of how small and suffocating it feels as it refuses to push outside its own boundaries.

View Comments (24)
Back To Top
5
Mediocre
About GameSpot Reviews 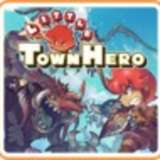