The Vita version of Little Big Planet is the best yet, and makes great use of touch and tilt controls to boot.

It has been a long time coming, but Little Big Planet PS Vita is finally here and--on the off chance that you're wondering--Sackboy's latest adventure was well worth the wait. Not only does LBP Vita improve upon its predecessors in some meaningful ways, but it also manages to put the Sony handheld's oft-abused touch and tilt functions to great use while doing so. Out of the box, LBP Vita has plenty of great content, and if previous games are anything to go by, user-created levels will keep the game fresh with new and occasionally awesome experiences for many months to come.

As in previous games, the story mode in LBP Vita serves as a showpiece for what the included creation tools are capable of. Playing through the expertly crafted story levels is both a humbling and an inspiring experience if you're an aspiring creator, and, more importantly, it's also a lot of fun. A charming narrative about an evil puppeteer in the colorful land of Carnivalia, told largely through brief cutscenes, ties all of the otherwise dissimilar levels together, and the playful audio and visual presentation throughout is hard to find fault with. If you disliked the floaty platforming action in previous games, you're going to be similarly disappointed here; the game never demands more precision than you're afforded by the controls, though, so when Sackboy dies, it's at your hands.

LBP Vita's story mode rarely poses a serious challenge, but acing levels with 100 percent of items found and no lives lost is a different matter entirely. It's not even possible to find all of the items on your first playthrough in many cases, because stickers found in subsequent levels are needed to trigger specific switches. Levels littered with secret areas, multiplayer-only puzzles (the built-in voice chat comes in handy), and loads of collectible items demand to be replayed, and even after you've milked a level for all of the tangible rewards that it's good for, there are level-specific leaderboards to climb.

Successfully find the keys hidden in many levels, and you unlock minigames that include everything from boxing and air hockey to whack-a-mole and tower-building with Tetris blocks, many of which are played with the screen oriented vertically. The fact that these incredibly varied minigames were all created using the same tools you have at your disposal is impressive, but none of them are likely to hold your attention for long. For that you need to head to the arcade area, which features five games that, in some cases, wouldn't look out of place if they were made available individually on the PSN store.

Like the aforementioned minigames, the arcade games boast plenty of variety. Retro Vector brilliantly combines elements of classics like Asteroids and Lunar Lander. StratoSphere is a colorful puzzle game in which you touch shapes to determine whether or not they alter the course of a ball, and Tapling is a stylish touch-to-jump game that's somewhat reminiscent of LocoRoco. About the only thing that these and the other two arcade games all have in common, other than being great time-wasters, is that they employ the all-new "memorizer" device.

Among other things, the memorizer makes it possible for you to create multilevel games that don't need to be played through in a single session because progress can be saved. As demonstrated by the arcade games, it's also possible to incorporate ratings for individual levels and afford players an opportunity to replay them in any order via a simple menu system. In short, the memorizer makes it significantly easier to create games that feel like games rather than just a series of levels strung together. It would be even easier if the lackluster memorizer tutorials did a better job of explaining things with some context.

It would be hyperbole to suggest that the only limitation when creating content is your own imagination, but tools certainly aren't a significant obstacle.

LBP Vita offers no fewer than 67 tutorials covering various creation tools. Stephen Fry's witty narration is reason enough not to skip them, but the quality of the instruction that you're given is inconsistent. You're generally told what to do step-by-step while experimenting with different gameplay items, but it's not always clear what your goal is, and no attempt is ever made to offer feedback if you run into problems. In many tutorials it's not even possible to replay the instructional video, which is a bizarre oversight. Adding to the unfinished feeling of this aspect of LBP Vita are a handful of tutorials that, unlike the rest, aren't interactive at all and are simply presented as videos. All-new creation tools and the refinements made to existing ones mean some of the tutorials are useful even for experienced LBP creators; it's just unfortunate that their presentation isn't up to the standard that's set elsewhere.

Should you choose to skip the tutorials completely, most of LBP Vita's creation tools are so intuitive that with a bit of trial and error (and plenty of playtesting) it's not difficult to create and share levels that you can feel good about. Even incorporating Vita-specific features like touch and tilt into your creations is incredibly easy. Want that block of wood that you just placed to respond to touch? Stick a touch modifier on it. Want players to be able to drag that block of wood around with their finger? Tweak just one setting for the touch modifier, and you're good to go. It would be hyperbole to suggest that the only limitation when creating content is your own imagination, but tools certainly aren't a significant obstacle.

Sharing your creations online could hardly be easier, and while there's no guarantee that your masterpieces will find an audience, there are systems in place to help the best user-created content bubble up to the surface. Levels that have received positive feedback from players show up in the "cool levels" menu, while levels that the development team particularly likes show up in the "team picks" area. As a player looking for levels to play, you can also search using a number of criteria, such as most played, highest rated, and most recently published. There's also an option to search via a text field, which is handy if, for example, a friend gives you the name of a level that he'd like you to try.

Of course, all of the community features of LBP Vita require you to be online, which, given that it's a portable system, isn't always easy. It's great, then, that while perusing user-created levels you have the option to download them to play later. Taking your Vita on a long road trip? You can load it up with community levels before you leave. Just be sure to upload ratings and reviews for those levels when you return; it takes only a moment, and the success of the LBP ecosystem depends on it.

This is the game that your Vita has been waiting for. For months, the shiny handheld has been aching to show you what it's really capable of, and with the arrival of Little Big Planet PS Vita, it finally has an opportunity to do so. 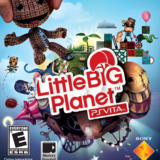 Justin has been a fan of user-created content ever since he made his first (not good) map for Command & Conquer: Red Alert 2. He created levels in both of the previous LittleBigPlanet games after finishing their story modes, and for the purposes of this review he built and published a level entitled White Lines that he'd love you to check out. 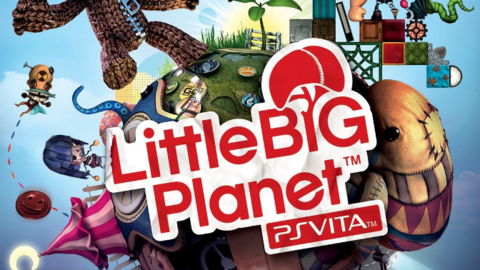 LittleBigPlanet lets you play, create, and share on the PlayStation Vita.