Libero Grande is, without a doubt, an unapologetic arcade soccer experience, making no pretenses to heavy stat-tracking or any of that kind of tomfoolery.

Leave it to Namco to take a well-worn genre and do something different with it. In Libero Grande, not only has the renowned developer and publisher released a (surprise!) soccer game, but a soccer game that is at once refreshing in both concept and execution.

In a marked contrast to other soccer games like EA's FIFA series or Konami's International Superstar Soccer, where you take control of the entire team, Libero Grande puts you in charge of only one member of your squad, just as if you were actually on the field. While this may seem underwhelming at first, it quickly becomes apparent that this is probably the most realistic soccer game to date. The playing perspective is viewed from the third-person, and the angles at which you play really give you the sense of scale you would get playing in a real stadium. Simply put, no other soccer game will get you as close to the field as this one.

As usual, with just about every Namco home conversion (Libero Grande was originally an arcade game released in Japan on Namco's System 12 board), there are a bundle of additional options to keep the gamer busy. Arcade mode, International Cup, exhibition, and World League modes are all available, and although none sports a FIFA license, it really doesn't matter because almost all nationalities are represented. Another mode called Challenge 9 is featured, which lets you hone your footy skills in a series of drills similar to the extra games found in Capcom's Rival Schools. Although no real-life athletes are featured, the players offered are basically clones (including a Valderamma-be), so soccer buffs will likely find a player to their liking.

Graphically, the game made a graceful jump from the System 12 board to the home console. This is no small feat, considering how many players are rendered at one time, with full-size stadiums and arenas looming in the background. The frame rate stays at a smooth 30fps and never drops, no matter how much action is taking place. The sounds are bright and crisp, and you can choose from the arcade soundtrack or an arranged soundtrack. It should be noted, however, that there is no play-by-play announcing, but you never hear any of that when you're on the field anyway, so it's not really missed. For the multiplayer household, there is an excellent split-screen mode (vs. or cooperative) where two people can play. There's no discernible drop in the graphics or frame rate either. It's very well done in any case.

The control is tight, and although Dual-Shock is not supported, the vibration function is. Go figure. That's not to say the game is perfect because it's not. First, you always start off playing right wing, presumably to give you maximum scoring opportunities. Still, it would have been nice to play sweeper or goalie now and then. Second, your team always plays like a bunch of conservative housewives. Even if the opposing goalie is completely out of the net, and your teammate has a clear scoring opportunity, he'll pass it off instead or run it out of bounds. Basically nobody scores except for you, so you better be there to receive the pass. Also, since the game basically revolves around playing the game as if you were really on the field, you run around a lot trying to stay in position. It gets hard, sometimes, to do this since your teammates (especially on defense) will usually get run over by the other team. What this does is force you to run out of position and help these morons, which isn't good, since you're the right wing. Right wings don't play left fullback!

Another bizarre oddity is that the field has a tendency to warp and stretch causing multiple illusory effects to occur any time your man turns around and heads upfield or makes any sudden turns. This is because the field is rendered in a grid pattern that produces a moire-effect whenever the field angle changes. Nevertheless, it's still disconcerting at times and takes a while to get used to.

Despite these minor gaffes, the game is still, possibly, the most revolutionary soccer game to be unleashed on the gaming public. Never has anyone approached soccer from this perspective, which makes this game such a treat. For anyone who eagerly scours the import gaming scene, it would be a worthy investment to pick up this soccer diversion. Libero Grande is, without a doubt, an unapologetic arcade soccer experience, making no pretenses to heavy stat-tracking or any of that kind of tomfoolery. Instead, it offers great soccer gameplay that you won't find anywhere else. 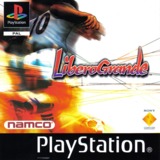 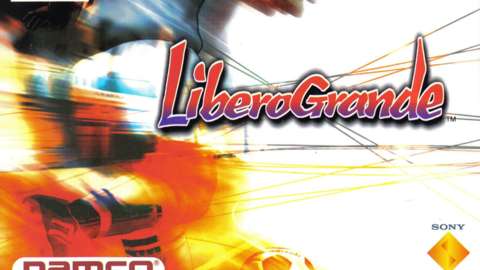 Libero Grande is, without a doubt, an unapologetic arcade soccer experience, making no pretenses to heavy stat-tracking or any of that kind of tomfoolery.