I've battled robots, supervillains, and henchmen beyond number through the streets of New York, through the halls of Asgard, under the sea, on the deck of the S.H.I.E.L.D. Helicarrier, and in space. And I'm only moments away from foiling Doctor Doom's nefarious, world-threatening plans, whatever they may be. Lego Marvel Super Heroes has arrived, transforming the Marvel universe into a Lego playground bursting with wit and diversity.

Lego Marvel Super Heroes starts with a standard comic book plot and runs with it. In the game's opening cutscene, Doctor Doom has destroyed the Silver Surfer's surfboard and hired every available supervillain to gather the board's cosmic brick components in order to create his Doom Ray of Doom. The plot has various super teams, such as the Avengers, the X-Men, and the Fantastic Four--as well as solo heroes--working to recover the cosmic bricks while various villains swoop in to stop them.

The game revels in the cheesiness and over-the-top attitude that characterize Marvel comics. The playful writing has the characters bouncing jokes off each other, and skilled voice actors chew up the scenery with every snarl. A series of background jokes--such as Nick Fury evoking the 2012 Avengers movie by asking about lunch, and a nearby S.H.I.E.L.D. agent quickly producing a takeout shawarma menu--rewards a keen eye and comic book knowledge. Upon finishing a level, you see Lego workers sweep up the damage you've caused, while Agent Coulson amusingly offers coffee and snacks to those around him.

The Lego games have always found ways to sing new songs to a familiar rhythm. You enter a level, smash or blast everything around you, snag the Lego pips that rain down, and perform superpowers and assemble machines that allow you to enter the next area. You've tapped your feet to this gameplay beat before, but Lego Marvel Super Heroes keeps things snappy, barely giving you time to breathe before ushering you to the next heroic task. The Marvel connection is a delightful complement to the spirited pace from the very beginning; the first characters you play with are Iron Man and the Hulk, and the first level involves smashing everything within New York’s Grand Central Station.

Unlocking new playable characters is another returning joy, thanks to the varied array of superpowers at your disposal. You can dive into a group of enemies as Wolverine and claw through everything in front of you, or harness Jean Grey's significant powers and hurl opponents into each other like human bowling pins. Either way, your slain opponents explode into dozens of tiny Lego blocks that serve as the game's primary currency. Each major character offers a different kind of gameplay mechanic, making it fun to jump into the battle and take down groups of enemies--even if your character of choice is Howard the Duck toting a powerful rocket launcher.

Your first campaign runthrough is only the starter course: you unlock loads of characters and content that make Lego Marvel Super Heroes worth returning to. Dizzying numbers of characters, locations, vehicles, and landmarks you've loved from the Marvel world have been translated into Lego form, and once you discover the S.H.I.E.L.D. Helicarrier, you may explore New York as any character you've unlocked and take on missions as you see fit. The game's Free Play mode taps into the compulsive need to unearth every secret and unlock every door by encouraging you to replay levels as different characters, thus gaining access to areas previously closed off.

Lego Marvel Super Heroes looks and sounds lovely, but its presentation quirks often prove distracting. Certain characters repeat the same lines of dialogue ad infinitum, which can get tiresome; there are only so many times you can hear Tony Stark proudly describe himself as "Tony Stark...genius, billionaire, playboy, philanthropist" before it gets old. The frame rate occasionally drops, particularly upon entering co-op mode, and a small black box occasionally appeared in the air over my characters' heads towards the end of the game. At one point, my character would respawn directly next to his still-present corpse, while a boss fight against Red Skull had me wandering around the room for several minutes looking for scenery to smash before I realized I had encountered a bug and had to restart the level.

In spite of such troubles, inviting visuals, surging music, and hilarious character interactions make for breezy entertainment. Weird moments, such as accidentally turning Mr. Fantastic into a tea kettle, and Iron Man doing the robot, further widen the smile you're sure to be wearing on your face. It's moments like these, along with taking down a suit of flying Hulkbuster armor via the House Party protocol from Iron Man 3--wherein half a dozen Iron Man suits soar in to pound on your opponent--that keep you coming back for more. Whether you're looking for a way to take down the Juggernaut or working to help a random citizen in Free Play mode, Lego Marvel Super Heroes is all sorts of web-slinging, shield-flinging, Hulk-smashing fun.

View Comments (81)
Back To Top
7
Good
About GameSpot Reviews 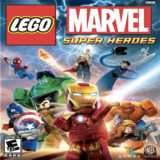 Chris Barylick has every intention of unlocking 100% of this game's content, if only to fight the forces of evil with Aunt May and her umbrella.