Harry Potter's latest adventure in colourful block land is a fun and varied way to end the series.

Harry Potter's innocent days are over. The boarding school antics have trickled to a halt, classrooms have gone silent, and even Quidditch matches--once the mark of happier times--have fallen by the wayside. In their place, a much darker picture has taken shape, marked by isolation, unpredictability, and the ever-increasing fear of death. As far as stories go, it's not exactly a walk in the park, but it's nothing that a good Lego sense of humor can't handle. Like its predecessor, Lego Harry Potter: Years 5-7 excels at finding the true heart of the story it is trying to tell, layering this otherwise bleak premise with its own particular brand of cheekiness without sacrificing the essence of J.K. Rowling's world. This is a fun, richly detailed game that rewards curiosity and offers plenty of gameplay variety, making it well worth the effort for Lego and Harry Potter fans alike.

Lego Harry Potter: Years 5-7 weaves together events from the final three Harry Potter books and the final four films. Despite the necessary liberties taken to mesh three narratives into one, the game manages to employ a multifaceted structure that is easy to navigate: each of the four chapters of the game is divided into smaller subchapters, each comprising a new part of the story. The gameplay is consistent with past Lego games: each short level requires you to complete a series of puzzle-solving tasks using a range of character abilities while knocking down and rebuilding a large part of the environment. There are also myriad side missions, quests, and collectibles. While the game's story moves along with effortless, Chaplinesque charm, it's the collectible element that adds both variety and replay value. There's a certain kind of addictive satisfaction that comes with collecting absolutely everything, and the game rewards this interactivity in a multitude of ways: 200 gold bricks, 24 school emblems, 20 cheats, and the fulfilment of becoming a "True Wizard" stud collector. It's also smart about the way it does this: only a proper playthrough unlocks all the characters and their respective abilities, and given that a lot of the game's environments feature areas and puzzles that are not immediately accessible, this adds a very good incentive for a later reexamination, both in single-player or through the drop-in, drop-out local cooperative multiplayer.

Throughout the game, you have access to eight spells, acquired in stages and presented in a revamped spell-wheel system that can be cycled through on the fly. The game has also made things a lot easier by eliminating the need for a lock-on mechanism, meaning you can shoot spells out of your wand to your heart's content or use the crosshairs when there is something specific you want to target. There's also a new, well-conceived duelling system that's both simple and efficient, requiring you to simply match the correct spell of your opponent a set number of times (usually four). As in Lego Harry Potter: Years 1-4, Diagon Alley serves as a hub world, where you can purchase new characters, unlock cheats, and access already-played levels. The addition of Weasley Boxes also helps to make the experience feel new; the boxes themselves--which contain numerous joke products providing special abilities for the surrounding puzzles--can be accessed only by members of the Weasley family, making red-haired companions a must in the free-play levels and providing you with an incentive to switch between characters more often. There are also Luna Lovegood's Spectre Specs, which let you see and build with invisible Lego bricks.

As in other Lego games, there are certain exemplary moments full of well-dressed charm: Dumbledore's botched escape from his office in Order of the Phoenix, Harry's awkward romantic entanglements in Half-Blood Prince, and Snape's grisly death at the hand of Voldemort for the horrendous crime of eating all the muffins. This well-maintained lighthearted tone--a hallmark of all Lego titles--is possible here due in large part to the attention to detail paid in the game's design. The well-textured backgrounds add depth and clarity to the gameplay, while each of the central characters--out of the 150 or so in the game--possesses an endearingly evocative individuality central to his or her place in the wider narrative, despite the predilection for right angles.

The game's environments are well detailed and contextually accurate, providing a rich backdrop for the action. The cutscenes re-create some of the film series' most inspired moments (the opening scene of Half-Blood Prince is a particularly fine example of this) and succeed in doing justice to the story's darker tone through the expertly crafted flashback sequences which are presented in a striking, sepia-toned aesthetic that reflects the maturity of the source material. Perhaps the most arresting of these is The Tale of the Three Brothers in the Deathly Hallows chapter, a level that retains the whimsical 2D aesthetic of the film and lets you take control of the three brothers, each trying to foil Death in his own way. The fact that you can interact with this part of the story is both exciting and satisfying. Adding to the magic of it all is a blend of John Williams', Nicholas Hooper's, and Alexandre Desplat's finest musical score moments from the final four films.

But it's not all smooth sailing. The loading times can be a bit of a bore, especially since the game requires a substantial amount of time to load even when you're walking in between rooms and scenes. There's also a slight inconsistency with some of the game's smaller tasks, which are inserted at various moments throughout the story but have little bearing on what's actually happening. For example, during the attack on The Burrow in Half-Blood Prince, you are taken out of the action and asked to spend an inordinate amount of time building a cart. A cart. This is both irritating and anticlimactic--you know there are Death Eaters everywhere, with some serious high-tension duelling waiting to happen. But these moments are infrequent, so their interference throughout the game is not uncomfortable.

For those who aren't ready to say good-bye to Harry Potter just yet, Lego Harry Potter Years 5-7 is a charming way to stay inside J.K. Rowling's magical world a little bit longer. Despite the occasional slipup, the game successfully builds on the original story to offer a simple yet satisfying experience that has depth and replay value. There's enough to engage and have fun with here to appeal to fans of Harry Potter as well as fans of previous Lego games. 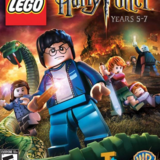