Harry's adventure into Lego land is exactly what you'd want it to be: charming, fun, and chock-full of secrets.

If you're familiar with developer Traveller's Tales' previous Lego games, you might think you know what Lego Harry Potter: Years 1-4 is like even before you've played it--and you'd be partially right. In this game, just as in Lego Star Wars and its ilk, you (perhaps along with a friend on the same console) experience a witty and wordless rendition of a famed tale, with your favorite characters replaced by blocky Lego re-creations. Yet central elements of the previous games, such as simplistic combat and floaty platforming, have been given a secondary role in Harry's story. Now, the focus is squarely on collecting all those countless Lego bits that go flying everywhere with almost every spell you cast. You're constantly showered with currency as you solve light puzzles and manipulate practically every object you see with your versatile wand. You still need to contend with a few of the series' lingering issues (unhelpful AI, slippery platforms) and a couple of minor new ones (iffy targeting, random bugs). But the scattered flaws aren't likely to dampen the joy of playing Lego Harry Potter, particularly if you're a fan of the source material.

Of course, you'll get the most out of Lego Harry Potter if you can tell Dobby from the Dursleys. And if you're one such fan, the game will frequently have you in stitches. As you can tell from the title, this adventure covers the first four novels of J.K. Rowling's Harry Potter series, and it does so with the same humorous bent that characterizes all of the developer's Lego games. Whether it's a Lego Hagrid screeching into Little Whinging on his motorcycle or the lovely young ladies of Beauxbatons prancing into Hogwarts, exaggerated sound effects and adorable animations make every cutscene a total delight. Lego Harry Potter takes most of its cues from the movies rather than the books, using the films' evocative musical soundtracks to great effect. The game takes certain liberties with the story for comedic effect, but these charming tweaks are in the spirit of the series and likely to elicit constant giggles. The only liberty that doesn't work out so well is a final action sequence bolted to the ending of Prisoner of Azkaban, which is super fun to play, but makes no sense within the context of the original story.

Such action sequences are rare in Lego Harry Potter, though there are still light combat sections and boss fights. You defeat Dementors by casting the Patronus Charm, fight Aragog by throwing spiders at him using Wingardium Leviosa, and even take on He Who Must Not Be Named. Most of the time, however, you're scouring the environment looking for ways to use your ever-increasing repertoire of spells. You can switch between spells easily and cast the one you prefer, and in certain cases, such as using Lumos to make vines wither away, you need to select the spell manually. However, most spells are contextual and can be cast by holding a button and hovering the spell cursor over the object you want to manipulate. Just be sure to plug in a controller or two; the fiddly keyboard controls aren't that friendly for either kids or adults. And even with a controller, the targeting can be a little iffy; sometimes the halo indicating an interactive object won't appear when it seems it should, and it's really easy to target something you don't intend to--such as an unsuspecting student. But this is a mostly insignificant inconvenience. For the most part, you'll be smashing everything that's smashable and reconstructing everything that's reconstructible, reaping the bits that scatter as a reward for charms well cast.

Between levels, you can head to Diagon Alley to spend your pips on new characters, costumes, spells, and other unlockable trinkets. But the goal of all the spellcasting isn't just to gather money; it's to solve environmental puzzles to progress to the next chapter. The puzzles aren't difficult; you can solve almost any of these conundrums by simply making sure you've hovered your spell cursor over everything you possibly can. But doing so is a lot of fun since there's so much variety in how various environmental elements react to your manipulations. Sconces light up and lavish you with fireworks. Mops clean puddles, and brooms sweep up dusty paintings. The inhabitants of Hogwarts' living portraits toss you important trinkets, or grant you access to new areas if you're controlling a member of the right house. If you're controlling Ron, Boggarts appear as spiders, and casting Riddikulus causes them to clumsily dance about on roller skates for a few moments. (If you're controlling Harry, these same Boggarts appear as Dementors.) You release Scabbers or Crookshanks to enter confined spaces, and you brew Polyjuice potions when you need to appear as another student. There's a lot to do, all of the time, and while none of these tasks are challenging, the diversity keeps things always enjoyable.

Between story missions, you can explore Hogwarts and other optional areas, such as Gringotts Bank. You might finish a quick play through in six hours if you're just interested in seeing the story, but Lego Harry Potter is the kind of game you return to again and again to uncover its various secrets and collectibles. You won't be able to enter certain areas and perform certain spells your first time through, so to see everything the game has to offer, you must return to the levels in free play using different characters. Even if you think you're being thorough the first play through, you'll be lucky to approach 50 percent completion. But whether it's your first time through or your fifth, you should take another wizard to class with you. While there is no online co-op (again), another player can drop in at any time and take over for one of your AI companions. Not only does having a buddy with you make for a better time, but you won't need to rely on the friendly AI, which isn't always helpful when it comes to cooperative puzzle solving. Luckily, AI failings are much less common now than in previous games, and co-op puzzles aren't frequent, making these imperfections a minor quibble.

The AI isn't the only lingering flaw to carry over into the newest Lego game, but like that particular aspect, the others have been thankfully marginalized to the point of being barely noticeable. Slippery edges and odd camera angles hinder a couple of platforming sequences, but there are so few of them that you won't be too bothered. Similarly, while there are some combat sections, they are very light, and few of them feature the respawning enemies that tainted Lego games of years past. In fact, they come as a happy change of pace among the many puzzles. We did encounter a few glitches, however. The game often hiccups between cutscenes, and on multiple systems, choosing to quit from the main menu caused the game to hang, forcing us to shut down the process from the Windows task manager. It's to the game's credit that such problems are so easily dismissed in light of all the fun and variety that so deftly veils them.

Lego Harry Potter: Years 1-4 is easily the best Harry Potter game to date, though if that sounds like a backhanded compliment, consider this: It's one of the finest Lego adventures to date as well, which is no faint praise. By minimizing the repetitive combat and inconsistent platforming, Traveller's Tales has also minimized the frustrations, making this excursion to Hogwarts enjoyable for the whole family. Minor flaws, old and new alike, keep Lego Harry Potter from becoming a family-friendly classic, but it's charming and funny, and most importantly, it's fun. And that kind of magic is all too uncommon, even in Harry's world. 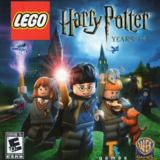