Kong: The 8th Wonder of the World Review

Kong: The 8th Wonder of the World is a competent action role-playing game and a decent movie tie-in.

Whereas all of the other games based on the latest King Kong movie are violent first-person shoot-'em-ups, the GBA game is, instead, an easygoing role-playing game that tests the player's puzzle-solving ability. Since the Game Boy Advance can't push polygons like the big consoles can, Ubisoft's solution was to create a top-down viewpoint, Zelda wannabe and flesh it out with the characters and dialogue from the movie. Kong: The 8th Wonder of the World never achieves the same levels of intricacy or excitement that Nintendo's Legend of Zelda games do, but it's still a competent action RPG and a good movie tie-in that should satisfy the film's younger viewers.

Like the movie, the game opens with filmmaker Carl Denham traveling to Skull Island to get footage of the legendary ape, King Kong. Among his entourage are Jack Driscoll, a scriptwriter and self-proclaimed macho man, and Ann Darrow, an actress hired to star in Carl's film. The trio arrives just in time to interrupt a sacrifice ceremony that the local villagers are holding in honor of the mighty beast. Unlucky for them, the villagers decide to kidnap and sacrifice Ann instead. Drama ensues as the major portions of the game revolve around rescuing Ann and escaping the island. Many key moments from the movie are duplicated here, but dozens of game-specific situations have also been added to lengthen its overall play time.

Kong: The 8th Wonder of the World bears more than just a passing resemblance to any of Nintendo's recent Legend of Zelda games, as it employs the same top-down viewpoint and uses a similar design structure. There's an expansive overworld to explore, and there are six large temples scattered around the island that contain multiple floors and numerous brainteasing puzzles. The overworld has its fair share of enemies, hidden caves, and treasures, but the majority of work happens inside the temples. It seems like every room has a different puzzle in it, and you have to figure out each one in order to move on to the next room or unlock a door somewhere else in the temple. Most involve activating switches, rearranging blocks, or hunting down and placing ceremonial items in their designated spots. The puzzles aren't terribly difficult, but there are loads of them. In some temples, there's also a giant creature waiting for you at the end.

Ubisoft's game strays from the Zelda formula by giving players the opportunity to control multiple characters simultaneously. Jack, Carl, and eventually Ann, can be controlled individually or as a group. Splitting them apart is useful when you need someone to stand on a switch in order to keep a door open or a bridge extended. When you're controlling the group, you can switch the character that's in the lead. This is handy, because each character also has his or her own unique attacks and abilities. Jack can hack at enemies and logs with his machete, shoot enemies with his rifle, or activate far-off switches by throwing spears at them. Carl can toss grenades and carry torches, which helps for opening sealed caves and setting things on fire. He's also the only one in the group that can push and pull heavy stone blocks. Ann, meanwhile, is saddled with the stereotypical skills of being able to scream at enemies and use herbs and items to heal the party members and whatever sick locals you run across. The character-switch gimmick adds a little bit of extra flavor to the whole experience, and it isn't overused, which is nice.

What the game lacks, mainly, is punch. The same enemies are recycled constantly, the temples all look alike, there's too much backtracking in the overworld, and so on. Typical action RPGs give players plenty of characters to interact with and a healthy variety of gadgets to toy with. In Ubisoft's Kong, there are perhaps a half-dozen villagers to talk to, and, aside from each character's weapons, the only gadget is a raft that characters can steer in certain areas.

The game is by no means a snoozer, however, as players can actually take control of Kong at various points and go on a rampage through side-scrolling stages. These rampages, although brief, are great fun, because they involve Kong tearing apart the jungle and picking fights with large prehistoric dinosaurs.

Fans of the film will appreciate that the presentation incorporates several movie-based nuances, particularly the graphical cutaways that feature actual situations and dialogue from the film. Beyond that, the development team has also crafted a game engine that compares favorably to what Nintendo, Konami, and Square Enix have produced for the GBA. The top-down environments are colorful and extremely detailed. One particularly impressive detail is the layer of ambient fog that sits above everything. Some of the other animated details, such as flowing streams and swaying torch flames, are also nice to see. Character animations are sufficiently fluid, and the larger creatures, namely Kong and his dinosaur foes, are actually rather impressive. There aren't a lot of different stock enemies, however. The graphical swagger also suffers because the temples all look alike, although that is offset somewhat by all of the blocks, switches, and crumbly walls there are to interact with.

As for the audio, it too has its moments. The sound designers did a superb job with the game's atmosphere. In addition to the music that's always playing, there is a constant undercurrent of jungle noises, such as birds chirping, monkeys screeching, and rivers flowing. It's worthwhile to keep the volume up just to hear the sounds of the environment, even though the rest of the music and sound effects are generic and mostly par for the system.

Ultimately, what you get out of Kong: The 8th Wonder of the World will depend mainly on what you expect from it. If you expect a good movie tie-in that also happens to be a competent action-role-playing game, then you should be more than satisfied. If, however, you're looking for the next great action RPG to pass the time until the next Legend of Zelda or Boktai comes out, you should probably look elsewhere. 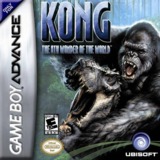