Knights of the Temple II Review

After playing Knights of the Temple II, it's hard to believe that the first game in the series could have been popular enough to inspire such a frustrating sequel. Insane bugs, broken missions, and impossibly stupid controls will make you want to bash your head against your keyboard in disgust. Quality assurance went out the window on this game, which is too bad, because there's some fun combat and nifty boss encounters buried underneath the annoyances. Sadly, you have to wade through a lot of muck to get to the enjoyable parts.

Knights is a combat-focused role-playing game, and sure enough, you jump into the plate boots of medieval hero Paul de Raque, who sports a nice wide helmet and mutters about the "one true God." You're looking for three objects that will allow you to close a portal that's letting in the usual legions of undead. On the way, you fight a bunch of baddies and complete some half-baked collection quests. The story is barely cohesive and made worse by apparent references within the dialogue to the original Knights of the Temple, which never reached American shores.

But first you'll need to figure out how to get around, and this is where you'll quickly discover the game's console roots. It was released on the Xbox and PlayStation 2 in the UK in late 2005. But it seems that a year wasn't enough time to implement workable third-person controls with a mouse and keyboard. The default control scheme doesn't even use the mouse buttons, nor can you remap important combat controls that are permanently assigned to the numeric keypad. You can try to play this way, but the camera continues to move a little bit beyond where you move the mouse, and the effect is a lot of wobbliness that makes you feel seasick. So you can plug a gamepad in, but you should be prepared to head to the keyboard from time to time because the buttons won't always work the way they're supposed to, particularly in menus and dialogue trees.

Once you finally get moving, you'll find that Knights isn't really an RPG as much as it is a third-person action game with some role-playing trappings, such as improving skill and purchasing different weapons. As you progress, you earn experience points that you then spend to improve your combat expertise, unlock combos, and upgrade other special abilities. The combat, when it's in full gear, is challenging and a lot of fun because you get a good number of different skills and attacks to perform. Battles are deliberate without being slow, and swinging a heavy weapon feels weighty and satisfying. You can switch over to a bow if you like, but it's handy only in boss encounters and in other situations with unhurried enemies. In fact, those boss scenes are the best moments of the game, such as defeating a huge ogre in freefall descent.

Every other aspect of the game requires an inordinate amount of patience, more than any reasonable person possesses. First and foremost among the frustrations is the litany of ludicrous bugs you must endure. In medieval times, climbing stairs was apparently a dangerous activity because doing so at just the wrong angle can cause Paul to jitter madly, take an enormous amount of fall damage, and die. Perhaps the heavy armor is tough on the knees? If you take quests in an order that the game doesn't expect, you will also get stuck in an endless dialogue loop and force a restart. At certain points, the camera zooms in and out uncontrollably, again forcing you to restart. And whatever you do, don't patch. The published patches add StarForce copy protection and consequently require a CD key to play, but Knights of the Temple II doesn't ship with a CD key in the US, so if you patch, you can't start the game.

Then there are the questing and traveling, which are incredibly boring and more linear than the retail box would lead you to believe. You can visit the three main cities and complete quests in any order you desire, but the areas are small and the 18 available side quests never get more exciting than "find me some food rations," "find me a plant," and "find me some pearls." But because there isn't always an obvious path, you're stuck hitting the "talk" button with every non-player character you pass to see if one of them will help move the main quest along. The dialogue is terrible, and not a single character is remotely interesting. Even during the forced moments of sentiment, Paul is never anything more than a dullard in a big metal suit.

Like the gameplay, Knights looks and sounds best when you're in combat. Swinging a weapon and using your healing spell fill the screen with vivid sword trails and vibrant particles. The sound also follows suit with appropriately stirring clangs and swooshes. There are some decent environments and set pieces, such as an underground lair where you meet a hulking scorpion. On the other hand, most areas are defined by their bland colors and washed-out textures. Some of the animations are jerky and look incomplete. There isn't a lot of spoken dialogue, but what's there isn't particularly good, and the generic soundtrack gets the job done without being noteworthy.

There's also an online multiplayer component for up to eight players in Knights of the Temple II, but there was never anyone online over the course of several days, nor did anyone ever join the games we created, even after being up for hours. Of course, with such plain game types as deathmatch, team deathmatch, and the hilariously titled capture-the-grail mode, it doesn't seem that anyone is missing much. Once you struggle through the dozen or so hours of single-player gameplay, there's no reason to return, not even for the alternate endings promised on the box. And it's too bad because the combat system is quite good and deserves to be in a better game than this one. 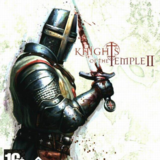