Though Kirby Squeak Squad rarely finds a way to challenge you, it's a clever and cute enough platformer to recommend to most DS owners.

Kirby's debut on the Nintendo DS in last year's Kirby: Canvas Curse was an interesting and entertaining departure from the simple platformers that HAL Laboratory's pink puff mascot was accustomed to in previous games. Focusing entirely on touch-screen controls, Canvas Curse may have still technically been a platformer, but its unique control method for moving a balled-up Kirby around the world made for a really entertaining style of gameplay. However, for Kirby's follow-up performance, it's back to the days of old--but that's not necessarily a bad thing. Kirby Squeak Squad gives Kirby his legs back and has him hopping, floating, and transforming through a series of colorful new worlds on a quest to take down a new group of baddies. Fans of Kirby's numerous platforming adventures will find a lot to like about Squeak Squad, though they'll rarely find themselves challenged by it.

The story begins when one day, Kirby is enjoying a nice afternoon picnic. In front of him sits a scrumptious strawberry shortcake that he's about to inhale (literally). Suddenly, an unseen foe swoops in and steals the delicious cake. Immediately, Kirby suspects the dastardly King Dedede and sets off to King Dedede's castle to get back his meal. Not long after, it becomes clear that there are far more insidious forces at work--namely, a crew of thieving rodents called the squeak squad. During the course of the game, you'll fight each of the members of the squeak squad many times over as you collect a series of stolen treasure chests and hopefully get back that delectable cake.

For the most part, you control the game using the DS's buttons rather than the touch screen. You move Kirby around using the D pad; the A button lets him jump; and the B button has him inhaling any object that happens to get too close to the vacuum that is his mouth. All the usual abilities are on hand, such as being able to balloon up and float around an environment, as well as the ability to copy the attack abilities of an inhaled enemy. The key difference between Squeak Squad and other Kirby platformers is that now Kirby has the ability to store multiple items. Whenever you collect a bubble that contains any sort of power-up, be it a new copy ability or a health boost, you can store it on the touch screen. You can store up to five bubbles here, and many of these bubbles can be combined into new items or abilities. For example, you can combine two smaller health power-ups to turn them into one big health power-up. Or you can combine two copy abilities to result in a new, random ability (random being the operative word, as there doesn't seem to be any real rhyme or recipe to the mixing and matching of basic abilities). To activate any of the abilities in storage, you simply double tap on the bubble.

There are more than 25 copy abilities to play with throughout the game, which are all fun and unique in their own way. Some of the more memorable favorites include the metal ability, which turns Kirby into a big, clunking hunk of steel and makes him incredibly strong (though also very slow); wind, which turns Kirby into a tornado that can spin all over the place, hurting any enemy in its path; fighter, which gives Kirby a wide variety of awesome martial arts moves; and magician, which puts Kirby in an adorable little top hat and lets him both toss playing cards as a projectile weapon and fire off doves, like some kind of Contra-esque spread gun.

Kirby's copy abilities play into more than just simple attacks. Levels are laid out in such a way that often certain abilities will yield access to seemingly impenetrable areas. For instance, Kirby can take on an "animal" ability that not only lets him claw away at foes, but also lets him dig through sections of dirt. When Kirby takes on his fire ability, he can melt away ice and snow, as well as light the fuse of any nearby cannons--which Kirby happens to be able to stuff himself into to get fired off into new areas. Though none of the game's stages take longer than a few minutes to complete, each one contains a few alternate areas and paths, some of which yield hidden chests. From the outset, finding chests seems optional because you'll be able to defeat stages without finding any chests at all. But hidden throughout the various stages and worlds are five star seals you'll need to have handy to access the final areas of the game. If you play diligently enough and make sure to come away with the big chest hidden in each stage, you'll eventually find all the star seals with no problem. But if you miss any, you'll need to go back to any stages you didn't grab chests from if you want to continue.

Of course, even if you do find yourself having to replay stages, it won't add much time to your quest. Squeak Squad's story mode can be completed in just a few hours on your first play-through. Part of it is the relative brevity of the stages, but another part is that the game is just very, very easy. No matter which copy ability you have on you, odds are you won't run into much resistance from the game's enemies. They're the kind of inhaling fodder that doesn't put up much of a fight in any situation. And one or two quick shots with any available weapon ought to dispose of the vast majority of them. Sub-bosses are often big pushovers as well. There are a number of times when you'll end up in a battle with some member of the squeak squad, but the battles often end up playing out the same. For example, you'll take one of your easier-to-fire-off weapons and simply hammer on the attack button to push the boss into the corner, ultimately making it completely helpless. A few of the game's main boss fights do require more strategy, especially in terms of which weapons you use, but it's usually obvious which weapons you should be using because they're the precise ones presented to you in bubbles before you head into the fight. This same hand-holding nature is prevalent all over the game. Whenever there's an area you can't get to, often all you need to do is look toward the enemies dotting the area. Their copy abilities are almost always the exact ones you need, eliminating any need to search--or think, for that matter.

It's hard to hang a kid-friendly platformer on its ease of play, but the fact that it takes so little time to complete the game is a hindrance. There's also not much to do once you're done with the story mode. There's a basic gallery mode that lets you look at the various things you've collected throughout the game, as well as a few touch-screen-focused minigames that can be played both single-player and multiplayer. Trouble is, these minigames aren't much fun. Speedy teatime presents you with a covered plate that is full of delicious cakes and an opponent (or opponents in multiplayer). Once the cover is lifted, you have to try to tap on the food you want to consume before other players do and take care to avoid any bombs that are moonlighting as pastries. Smash ride is a simple bumper car (or in this case, bumper star, because you're riding a star) mode, where you and your opponents try to bump each other off a platform while sliding your stylus around the touch screen to move the star. Treasure shot is a frenetic mode where you just slide the stylus up and to the right or left to fire off balls at treasures that pop up. Hitting them nets you points. There's also an unlockable game that's basically just a boss survival mode. The action in all of these games is simple and often rather hurried (and at times, borderline confusing). And once you've played through each of them a few times with friends, you never want to play them again.

One area where Squeak Squad excels is presentation. Though the game is entirely 2D, its bright, vibrant visuals are hard not to love. Sure, it's a real cutesy game. Kirby's still as patently precious as ever, and the enemies are the usual cartoon villains that are just as likely to make you go "awww" as they are likely to quickly die by your hand. But with such a rich color scheme and delightful-looking animations (seriously, Kirby in that top hat is almost too much cute to bear), you'll either gag with cute overload or fall completely in love with the game's look. The only real knock against the visual design is that it follows the platformer environmental checklist to the letter. There's a fire world, a forest world, an ice world, a sky world, and so on. Again, the environments look great, but they're all the pretty typical scenery that we've seen countless times before. Audio is impressive largely because of the fantastic soundtrack. Sound effects are decent, if a bit unassuming. But the soundtrack tunes fall right in line with some of the best, catchiest songs composed during the Super Nintendo's platforming heyday, and it's impossible not to get at least a few of the songs stuck in your head.

If you prefer a bit more meat to your platformers and want more challenge than what an easy, breezy game like this one provides, then you may find yourself over and done with Kirby Squeak Squad very, very quickly. However, those who don't mind the relative simplicity and short story may end up addicted to playing around with Kirby's various copy abilities and replaying stages over and over again to track down every hidden chest and item. Overall, the game is cute enough and features enough clever gameplay ideas to keep you entertained, even while you're bowling over easygoing enemies at a breakneck pace. 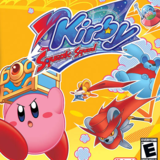 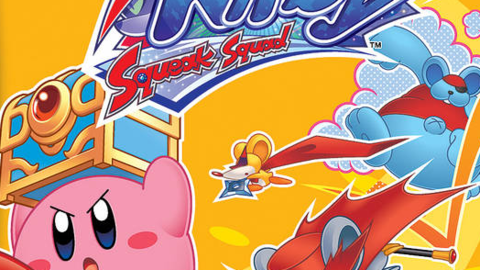 Kirby returns on the DS in his classic platformer form, but with extra features such as stylus control over Kirby's copy abilities.