King's Bounty is a great modern rendition of an old-fashioned formula.

One thing you can say for King's Bounty: The Legend is that it fares a lot better than most resurrections of old games. While these digitalized archaeological digs generally reveal that you wouldn't want to go home again even if you could (Defender of the Crown, anyone?), the revival of New World Computing's fondly remembered role-playing/strategy hybrid is a vast improvement upon its 1990 predecessor. While King’s Bounty may not be the most revolutionary game of 2008, its refined gameplay makes it a treasure worth hoarding.

Actually, about the only fair negative comment you could make about King's Bounty is that there isn't really anything new here. Just about everything feels like a rip-off of Heroes of Might and Magic. As with that long-lived Ubisoft franchise, the core of this game is all about taking on the role of a hero in a solo campaign (there is no multiplayer option) and guiding parties of mercenaries across a real-time map to fight turn-based battles on hex grids. A strong RPG flavor is granted through character creation, which allows you to choose from warrior, paladin, and mage classes and then trick out your avatar with skills, artifacts, weapons, armor, spells, and assorted other Gygaxian accoutrements. You then explore the huge medieval fantasy world of Darion in the service of King Mark the Wise, plying the trade of a treasure hunter. A story slowly develops regarding the king's older brother and the standard evil threat to the continued existence of, well, everything, although you don't have to pay much attention to it. Essentially, you just wander around doing good deeds, guiding an icon of your hero through the usual D&D-inspired landscape to slay monsters, loot treasure, scoop up skill runes, mana crystals, and leadership banners, and solve quests handed out by your king and various passersby.

Despite that description, this isn't a hack-and-slasher. Instead of whaling on monsters with a small party of adventurers as in the typical RPG, you wage tactical battles with veritable armies of troops on turn-based battlefields. Mages, priests, knights, archers, monsters, and the like are hired at special buildings such as the king's castle for use as shock troops in your hero's party. You start off with a paltry handful of these goons, but soon wind up at the head of a tremendous force of killer Renaissance fair refugees. Stuff enough gold into your pantaloons and increase your hero's leadership skill as you increase in level and you'll be able to afford the services of loads of hirelings. The scale of battles always remains manageable, however, as each unit type is depicted by just a single character model on the battlefield no matter how many of those units you actually command. This keeps the focus on pure tactics and allows you to whip through battles lickety-split, while still letting you make use of each unit's special abilities. As just about every unit comes with some sort of skill involving spells or bonus attacks, cutting to the chase without dealing with hordes of units is vital to keeping the game straightforward and simple.

This should sound familiar if you have any experience playing a tactical RPG. The only real difference between King's Bounty and Heroes of Might and Magic or Disciples is a greater emphasis on role-playing. Story is brought to the fore here in a much more overt way, thanks to a sarcastic sense of humor and a ton of quests to be solved. True, most of these quests have been scooped out of the big bag of RPG cliches (find stolen property, remove a curse, kill the big bad whatever that's plaguing our village, and so on). But many come with multiple parts that force you to venture all over the map to solve them, along with a great deal of personality conveyed through idiosyncratic characters and a lot of text. You can't just skip around like you're filling in blanks; do so and you're liable to get caught not paying attention, as with the quest where you're given the words to a spell solving a peasant's zombie problem and then have to pick the actual phrase out in a multiple choice menu when casting the spell a little later. So even though these various tasks might not break any new ground, completing them is more involving than the map-clearing busywork that dominates the usual tactical RPG.

Difficulty is also scaled well. Starting off on easy knocks down monster hit points to something quite manageable, and cranks up the amount of gold awarded so that you never seem to run out of the coin needed to hire reinforcements. It's gratifying to see newbies getting let in on the action like this; too many games of this ilk seem to want to punish players, or at least present such a grueling level of difficulty that only veterans of the genre need apply. With that said, moving to normal difficulty is one heck of a leap. Enemy hit points take a huge jump and your gold gets slashed to practically nothing, turning what was a pretty fast-moving game into what can be a grueling slog through battles of attrition.

Visual design is impressive, if not cutting-edge. The game is a couple of years out of date, although the use of bright color and loads of details on maps means that everything still looks great in a Disney kind of way. Areas are intricately drawn and laid out in such a way as to increase the fantasy atmosphere. Every nook and cranny is filled with something D&D-ish, from urns and skulls in catacomb corners to webs and giant mushrooms in forest clearings. Spell effects are spooky and imaginative, too. Magic is generally underlined with special effects like clouds of brimstone, puffs of green gas, and even leering skull faces. All of these added details sometimes gets in the way of your simply playing the game, though. Pathways through maps are very twisty-turny and often obscured with foliage or other terrain obstacles. It can be tough to locate a way forward without rotating the map or zooming in. Failing to at least pan the camera around before galloping into an S-curve can also see you trot right into a killer encounter with powerhouse monsters hidden just out of sight. Audio, on the other hand, is similarly secreted away. The score is a generic triumphal blast that repeats so often during tactical engagements you will almost immediately tune it out, while battle sounds are tinny and there is virtually no voice acting in the game.

Forget about looking at King's Bounty: The Legend as a sequel to an oldie-but-goodie and take it on its own merits. Anyone with the nostalgia gene who played the original might get a special thrill out of this sequel coming along almost 20 years later, but you don't need a connection to this classic to enjoy this impressive take on the traditional tactical RPG. 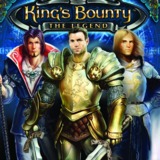