Disneyland Adventures does a remarkable job of replicating the park and all its charms, but flawed controls put a damper on this excursion.

Disneyland is one of the only places in the world where you can stroll down an idealized version of a small-town American Main Street, visit a haunted mansion, get a hug from Mickey Mouse, soar over London and into Neverland with Peter Pan, and have other wondrous experiences that are normally available only in the imagination. Disneyland Adventures tries to make these and other quintessentially Disneyland experiences available to you in the comfort of your own home. And in many ways, it succeeds. The park is re-created here with impressive accuracy and detail, and the attractions you can visit admirably capture the spirit of the rides that inspired them. Unfortunately, flawed controls mar nearly every aspect of Disneyland Adventures, making what should be a thoroughly enjoyable visit to the happiest place on earth as frustrating as it is fantastical.

You play as a child, free to roam the park to your heart's content without the need to wait in any long lines or stick close to virtual parents. (Actual parents needn't worry; this version of Disneyland is perfectly safe for youngsters.) After settling on an appearance for your in-game avatar, you're greeted by a talking golden ticket who becomes your constant companion in the park. He encourages you to introduce yourself to Mickey Mouse, who's standing nearby, and if you walk up to Mickey and wave, you're given the first of dozens of errands Disney characters have for you. Mickey wants you to get some autographs for him; Ariel wants you to collect some "dinglehoppers"; Buzz Lightyear needs you to blast surveillance cameras placed around the park by Emperor Zurg.

None of these are challenging--a golden path can always lead you to the next step of each quest--but children will likely enjoy the feeling of helping their favorite characters, and they get you moving from one area of the park to another. Your character never speaks, but the Disney characters you meet all have some charming, character-appropriate lines to rattle off. You can also dance with each character, collect their autographs in your own autograph books, and get hugs from them, and the 35 characters throughout Disneyland are a terrific assortment that includes classic characters from Disney's golden age as well as recent additions to the roster, such as Duffy Bear. A second player can jump in or out at any time, so it's easy to accompany another player on his or her adventures.

If you've been to Disneyland, you're sure to be impressed by the accuracy with which it has been re-created here. Near the entrance, for instance, the posters you see advertising attractions like the Haunted Mansion and Space Mountain are authentic, and strolling through Tomorrowland, you notice the spot-on re-creation of details like the neon signs for the Star Trader shop and the Starcade amusement center. Accurate use of music also helps transport you to Disneyland. In one corner of Fantasyland, you might hear the title song from Beauty and the Beast, and in part of Frontierland, "The Ballad of Davy Crockett" fills the air. A few park features such as Star Tours and the Indiana Jones Adventure are notably absent, but the game convincingly captures the look and sound of Disneyland's varied areas.

Unfortunately, although moving around the park in the game isn't as unpleasant as contending with crowds and scorching summer heat can be at the real Disneyland, it brings its own frustrations. You use your arm to guide your character around, which is sufficient for heading in the right general direction but makes stopping in specific spots, which you need to do to take pictures of certain landmarks, needlessly difficult. On top of that, just waving to get a character's attention can be a small ordeal. You have to wave for a few seconds straight before a character acknowledges you, and it's not uncommon for the meter that fills up as you wave to suddenly disappear, even though you haven't stopped waving. These issues make the voice controls for certain functions especially welcome. With a few words, you can call up a map and fast-travel to any region of the park, or zip right to any attraction. But the Disneyland atmosphere is so outstanding that it's a shame the controls make it awkward to do such simple things as standing in a spot so you can get a good look at an accurately re-created statue.

It's in many of the game's attractions, though, that the controls become a real hindrance. There are 18 attractions represented, and each one is visually exciting and delightfully reminiscent of the actual experience you might have at Disneyland. In Peter Pan's Flight, you fly with Peter over a lovely animated London, and then enter Neverland and ultimately duel with Captain Hook himself. In Space Mountain, you go on a speedy journey through the stars that brings you close to a black hole, a gas giant, and a comet field. These experiences might have been enthralling, but unfortunately, the controls frequently come between you and the Disney magic. On Space Mountain, for instance, as on numerous other attractions, you steer with your arms. As you hurtle through space, asteroids, space debris, and other hazards often get in your way, and the controls just aren't precise enough to let you reliably navigate around those obstacles.

Other attractions have you using your arms to aim rather than steer, and these suffer from similar problems. On the Jungle Cruise, you use your arms to aim a hose. You're supposed to use the hose to (among other things) shoot water into the mouths of hippos, and it's much more difficult than it should be to find the exact position where the water hits its mark, and then hold it there until the satisfied hippo moves along. There's no significant penalty for hitting an obstacle or failing to meet a goal--your overall rating out of five stars may be diminished a bit, but you can't lose at an attraction--but it's nonetheless frustrating to see your avatar go flying into hazards in spite of your best efforts to avoid them.

Some attractions (or sections of attractions) fare better. The sword fights that cap off Peter Pan's Flight and Pirates of the Caribbean are good fun; you wave your arm vertically or horizontally to swing your sword in those directions, and you have plenty of time to leap over or duck under your nefarious opponents' attacks. Other attractions focus on dancing. It's a Small World has you dance along with dolls that are doing traditional dances from around the world, and the Disney Princess Fantasy Faire imitates the format of Dance Central, with the sequence of dance moves you must follow scrolling up the screen. These simple movements are recognized by the game, so you can focus on dancing along with Ariel as she sings "Part of Your World" rather than struggling with the controls.

But more often than not, the controls come between you and your adventures in Disneyland. Whether you're trying to take a picture of one of the many hidden Mickeys throughout the park or you're bouncing down a country path with Tigger, the game's failure to recognize and respond to your movements frequently takes you out of the moment. It's too bad, too, because the park here so accurately captures the atmosphere of the place itself, and the attractions offer such a visually diverse assortment of experiences, from sneaking through a Spanish port with a friendly pirate to infiltrating Zurg's lair alongside Buzz Lightyear. But despite bursting at the seams with the kind of Disney magic that will charm children of all ages, Disneyland Adventures doesn't create the kinds of happy memories you wish it would. 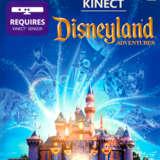 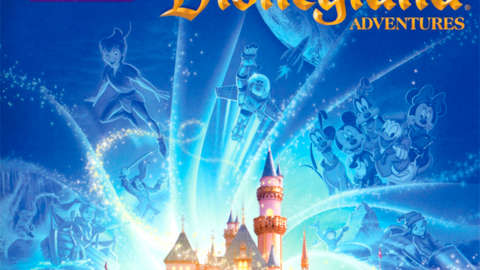 Kinect: Disneyland Adventures is a game for the Kinect on the Xbox 360 that showcases both the Disney parks and the Disney worlds.