Sometimes a title really an get the point across. Set-piece puzzler Kill the Bad Guy lays your motives bare with its blunt moniker, which nicely sums up your primary goal. The game has you murdering a rogues' gallery of ne'er-do-wells via assassinations that play out like gory outtakes from old cartoons, and lets you see the real aftermath of Elmer Fudd shooting Daffy Duck in the face. Yes, this is a game about killing, but it's a fun, lightweight game about killing that mostly succeeds by blending cunning logic- and physics-based puzzles with a great sense of humor relating to the daydream revenge fantasies that we all have about taking out everyone from serial killers to that guy in the Volvo who just cut you off.

The single-player-only Kill the Bad Guy puts you in the employ of an international guild of assassins out to kill every villain who ever got off on a technicality, escaped the long arm of the law, set up a terrorist attack, parked in a handicapped spot, and so forth. You do so by rigging up various traps that allow the murders to look like accidents, presumably because any half-decent international guild of assassins wouldn't want its dirty work winding up on the cover of the New York Post. Everything takes place in real time, although you can pause the action or even speed it up to zip past dull spots when you're waiting for your victim to get into position for the kill.

Each of the 60 levels (split into six chapters with 10 levels in each) included in the game is a small set-piece affair that involves no more than a couple of city blocks. The bad guy enters on one side of the map--which is sparsely populated by stores, vehicles, garbage trucks, pedestrians, and so forth--and walks around a set route until he exits a minute or so later. Everything is given a surreal, art-house style, with most of the backdrop presented in black and white. Only the bad guys really stand out, because they come equipped with colorful sporty jackets (think Starter in the '90s), faces painted with bull's-eye targets, and loads of bright red blood, which tends to end up smeared all over the landscape by the close of each level.

Dark objects in levels can be manipulated with basic left and right clicks of the mouse, while light ones are just part of the scenery. How and when you manipulate these objects is where the puzzle part of the game comes into play. Victims don't just stroll straight to their deaths, so you need to adjust the landscape to both nudge them into the right spots and set up various kooky traps. You can indirectly guide bad guys by putting obstacles in their way. So whenever you want to discourage targets from going down a street, you throw a stop sign in their way, or the glass from a broken bottle, or even a dead dog. Or lure them where you want them to go with goodies like porno mags and, um, French bread.

The trick is not being seen. At first, you just have to avoid the viewing cone of the victim (which can be toggled on and off), because he flees in panic if he spots anything suspicious (oddly enough, dropping a dead dog directly in front of somebody produces a pretty dramatic reaction). But later levels introduce patrolling cops, police cruisers, pedestrians, security cameras, and the like. Commit any sort of criminal act in front of them, and you instantly fail the mission.

Kill the Bad Guy murders are always pulled off in elaborate ways reminiscent of Saturday-morning cartoons as reimagined by Edward Gorey. Falling pianos, explosive manhole covers, runaway cars, flaming pools of oil, and more all figure into the mayhem here. You might combine a rope with a crate and then hang the contraption on a building for the moment that your target walks past. Or rig up a wannabe catapult with some parking stanchions and a metal bar from a nearby construction site. Or spill some water and then cut a power cable right as a bad guy is getting his feet wet.

Objects function in realistic, physics-based ways, but the game features sort of a "horseshoes and hand grenades" leeway where you can generally kill a baddie by getting reasonably close with a falling crate, an explosive, or a runaway lawn mower. You can never be foiled by any didn't-quite-get-me moments reminiscent of the grinning pigs in Angry Birds. Get close enough, and you can guarantee that you'll soon be seeing a screaming, flaming corpse-in-waiting running frantically around the map.

Trapping and killing are imaginative and fun for the most part. There are a lot of chuckles to be had, as well as some devious plots to concoct. Levels offer a fair bit of replay value. There are almost always multiple ways to kill targets, as well as bonus goals like finding a victim's passport and grabbing the tooth that always pops out of a bad guy as he expires. Levels fly by, too, making this a very catchy game you can play on the fly when you have only a few minutes to spare. You can whip through even the toughest levels in little more than 10 minutes, and the average and easy ones can generally be solved in no more than a couple of minutes on your first attempt.

But the developers don't push the design enough, and repetition is a problem. There are really just a handful of go-to ways to kill bad guys, so the thrill eventually evaporates from even wacky murders, such as slingshotting a dead dog onto somebody's head. Each of the game's six chapters also brings in a new gameplay element, like the aforementioned security cameras, and then the next few missions are fairly easy introductions to this added feature. As a result, the game isn't as challenging as it could be.

The dark humor sometimes goes a little too far. Bad guys are given biographies in the splash screens before each assignment. Most are irreverent and goofy, but some reveal that you're taking on too-close-to-home villains like one of the Columbine killers, serial killer Albert Fish, and even Hitler. Profiling these real-life monsters with the game's blackly humorous text can be a little off-putting.

Even though Kill the Bad Guy has its moments, it's never quite as challenging or as engaging as it could be. The biggest problem may be the platform. Such lightweight and casual play would likely work better on a phone or a tablet, especially at a cheaper price than the $14.99 sticker virtually attached to this Steam-distributed game. Still, even with these flaws, this is a diverting, innovative puzzler with more than enough charm to make staging loony-tunes murders look like an appealing pastime. 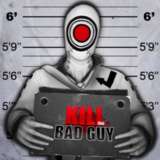 Brett Todd electrocuted, crushed, flattened, speared, blew up, and otherwise slaughtered bad guys for about five hours in the course of writing the review for Kill the Bad Guy.