Kid Chameleon is worth getting if Super Mario World or Sonic the Hedgehog didn't satisfy your need to run and jump over things.

Originally published in 1992, Kid Chameleon is a side-scrolling action game for the Sega Genesis that you can now purchase from the Wii's Virtual Console for 800 points. The story concerns a virtual reality video game that has eaten the town's children and the young Fonzie look-alike that has entered the game world seeking to free the missing tykes. The title refers to your character's ability to put on different masks that endow you with various powers, which you'll make use of to get through all of the platforms, spike pits, monsters, and other nasty things populating the game's 94 individual levels.

As is common in these sorts of games, the general idea is to reach the flag at the end of each level without losing all of your hit points to monsters and hazards. Much of the action involves jumping between platforms and pouncing on the heads of monsters. You'll also spend a fair amount of time breaking blocks with your character's head to grab timer boosts, crystals, and all of the different masks that give the kid his various superpowers. There are nine masks in all: A samurai helmet gives you a sword to slash enemies with; a knight's helmet lets you climb walls; a berserker mask lets you charge through walls; a hockey mask lets you throw axes; and so on. These masks inject a ton of variety into the game. Most levels give you the chance to switch among two or three masks, and there are usually multiple paths through a level as a result of being able to smash through walls or climb over lofty obstructions.

If variety is the game's strength, then charm--or the lack of it--is its weakness. Young "Fonzie" doesn't have the X factor that such mascots as Mario and Sonic have, and the majority of enemies in the game are generic reptiles or zombies that mainly walk around spitting things. The spooky music and haunted house visuals manage to convey the appropriate mood; however, the music lacks a memorable beat. The backgrounds are also so abundant with square bricks and rectangular platforms that it's hard to admire the reflective lakes or scrolling clouds situated behind them. Kid Chameleon isn't ugly, but its presentation is definitely more functional and less artistic than what we've seen in other Sega Genesis games from that era.

At least you don't have to play through the game in one shot on the Wii. The original Sega Genesis cartridge didn't offer a battery save or a password feature. Now, thanks to the suspend function built into the Virtual Console, Wii owners have the option of spreading those 94 levels across multiple play sessions. That's a godsend considering it can take anywhere from one to five hours to reach the last level depending on how you make use of the teleport pads you come across. Should you decide to download Kid Chameleon to your Wii, you'll probably want to make sure you have a GameCube controller or a Classic Controller handy. The jump and attack buttons are easy enough to reach on the standard Wii Remote, but the run button is located right next to the D pad. That leads to some painful hand contortions when you need to run, change directions, and jump all at the same time.

Kid Chameleon isn't the most charming platformer from the 16-bit era, but it is fun in its own right. It's worth a look if those other games didn't satisfy your need to run sideways and jump over things. 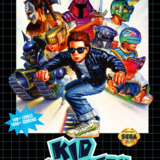