It's pretty hard to believe that someone at Activision saw this game and felt that it was worth bringing out in the States.

To all but a few comic book aficionados, the Judge Dredd name stands for a bad movie, a few bad video games, and a pretty decent pinball machine. And even though this latest offering from Activision is based on the Judge Dredd comic series rather than the Stallone magnum opus, it fits right in as just another bad video game. Even though most avid light-gun fans are probably starving for another game, this is one they'd be better off without.

The game plays just about how you would expect it to play. The camera perspective travels around without your help and stops every time a bad guy pops up. You pop a few caps into said bad guy, and the game continues. Occasionally you'll find a power-up or two, allowing you to have rapid fire or more powerful shots. In a definite nod to Area 51, much of the surrounding background can be damaged with your shots, scoring you more points in the process. The main difference is that most of the enemies take several shots to kill, which gives them plenty of time to return fire while you reload. This makes getting through a level unscathed pretty hard.

Judge Dredd moves at a decent frame rate, but the graphics look pretty bad. Everything is fairly pixelated, and it's somewhat hard to discern where the background stops and an enemy starts. The FMV is pretty hilarious. It looks like the Judge's outfits were made by spraying some gold paint onto cardboard, and the acting is laughably pathetic. The Dredd character, portrayed by some goon who apparently forgot to shave on the day of the shoot, utters phrases like "I am the law" with little or no conviction, and instead comes off as a complete weakling instead of the badass judge/executioner that you would expect. The soundtrack is filled with typical gunfire and explosion effects.

It's pretty hard to believe that someone at Activision saw this game and felt that it was worth bringing out in the States. It just doesn't have anything to offer at all. No matter how strong your craving for a gun game may be, just wait this one out. 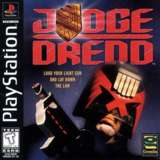