I Expect You to Die Review

The only way out is through.

There's nothing quite like the thrill of a daring escape. You've exhausted your options, had your epiphanies, and applied your knowledge under the extreme pressure of imminent death. It's only in the aftermath, as your heart rate slows, that you realize how close you were to failure. But you succeeded anyway.

I Expect You to Die captures that feeling. It finds you in the shoes of an international spy intent on foiling the plans of the evil Zoraxis corporation, placing you in discrete escape-room scenarios that test your intelligence, resourcefulness, and performance under pressure. It's equal parts terrifying and thrilling. It's a rewarding puzzle game and one of my favorite virtual reality experiences yet.

This is due almost entirely to how well I Expect You to Die uses VR to its advantage. Although it can be played using a mouse, keyboard, and standard monitor, the game is multitudes better on Oculus Rift or PlayStation VR, where Touch controllers or PS Move remotes make proceedings a much more tactile, involving experience. Many of these puzzles would be simple in a standard video game. In I Expect You to Die, on the other hand, they're nuanced and rewarding. It almost goes without saying, but here, in these virtual escape rooms, you almost feel the puzzles. You're there, twisting your head to find useful items, glancing at your feet when you drop a primed explosive, extending your hand to seal the cracked window of an underwater vessel.

The story serves mainly as context for your accolades, setting up each tense situation your suave character finds himself in. These range from bomb defusals to daring submarine escapes. My favorite asks you to create an anti-serum capable of distilling a chemical weapon formula, all the while disguised as a blue-collar window washer. Combining a variety of volatile chemicals is horrifying, but using my sponge on the glass in front of me to throw a nearby guard off the scent lends the predicament a grounded, almost humorous angle--the guard saw me, deemed me a harmless pedestrian, and went about his business.

Even now, in a year where virtual reality has finally broken into the mainstream, it's hard to describe the emotions a good VR game can elicit. The added layer of kineticism makes the mere act of swiping a virtual sponge up and down involving, to the point that I was afraid to turn my head and make eye contact with the suspicious guard. I stared straight ahead, both at the virtual world's digital window, and physical headset lenses in front of me, experiencing a fear that doesn't dissipate as soon as it may in a standard video game. It's not just that your hands start sweating--it's that your whole body goes rigid.

I Expect You to Die is reserved in its approach to VR, but for the better. Each of the four escape scenarios find your character in a seated, or at least stationary, position: in the driver's seat of a car, the desk of an office, the elevated platform outside a skyscraper window. Furthermore, developer Schell Games grants you the power of telekinesis--with only spare time spent justifying the ability, opting instead to admit how ridiculous it is through self-aware writing--allowing you to pull distant objects toward you. This lets you feel at home in I Expect You to Die's world. Like your character, you can remain seated, and it won't feel out of place in the virtual environment you inhabit.

There's a bit of a learning curve to these controls, as you discern the sensitivity of your telekinetic powers and gauge how hard to maneuver your Touch controller's analog stick. Once you do, however, you'll be levitating card keys through complex laser grids, avoiding any alarms and deactivating security measures, giving you a moment to breathe before handling dangerous chemical solutions in the enemy's laboratory.

Throughout the game, voiceovers by an archetypical British assistant direct you with one-liners and observational quips that highlight the perks and downfalls of being a super spy. "For your next mission you're going to the Caribbean," he muses. "But don't expect a vacation. I already told you we can't afford that." Like the writing that justifies your telekinetic powers, I Expect You to Die's overall script is humorous, and shows a vivid understanding of its source material--spy movies with heroes too cool, and too daring, to feel fear. And the best part about this game is just that: it makes you feel like those heroes, those Bonds and Bournes and Bauers, as they barely escape with their lives, only to straighten their tie as explosions paint the screen behind them.

I Expect You to Die does slip and fall along the way, though. While countdown timers and decreasing oxygen supplies exacerbate the tension of a bomb defusal or underwater escape, respectively, they result in frequent deaths and subsequent retries when they don't really work. This isn't entirely a bad thing, as each new attempt increases both your mastery of the escape room and, as a result, the feeling of being a trained spy. But it does lead to frustration along the way. More than once, I accidentally pulled the pin on a grenade instead of merely grabbing the grenade itself. I also tried my best to rotate a nearby oxygen valve in my underwater sub, only to find the Touch or PS Move controls unresponsive. And, suffocating sucks.

But the annoyances caused by these hiccups pale in comparison to the thrills I Expect You to Die delivers. Through well designed puzzles, intense escape room scenarios, and a kineticism absent in video games on standard screens, I Expect You to Die knows exactly how to leverage the magic of VR, and proves it almost every step of the way. 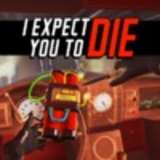 Mike Mahardy died many times on his way to escape in I Expect You to Die. He can now defuse virtual bombs in 10 seconds flat. GameSpot was provided a copy of the game for review.